“Things might be turning around soon,” Chris Harrison told ET’s Lauren Zima of what’s in store on The Bachelorette — and the biggest sign of that was Tayshia Adams’ bombshell appearance on Tuesday’s episode.

A promo at the end of the episode teased Clare Crawley’s time as the Bachelorette may be coming to a close, and ended with a stunning shot of Tayshia emerging from a pool. ET learned on Aug. 3 that Tayshia stepped in as lead for Clare, who fell for a man roughly two weeks into filming.

Tuesday’s promo was the first time ABC and Warner Bros. came close to confirming the news. The tease had fans falling out of their seats — and Chris was just as excited.

“From the producers to post department to decide — and it was all them — to put that Easter egg at the end, a la James Bond, Halle Berry getting out of the pool, was just jaw dropping and stunning,” Harrison said, referencing Berry’s iconic scene from 2002’s Die Another Day. “I have never rewatched an episode so many times as this episode. I think I watched it three times. I was that impressed with every ounce of that, and the Tayshia of it all at the end was just incredible.”

Tayshia’s big entrance couldn’t have come at a better time. Clare grew even closer to her frontrunner, Dale Moss, on Tuesday night’s episode, and even referred to him as her “fiancé” while talking to a producer. The other guys, meanwhile, considered whether to just “walk out” on the season.

“We thought this may take a turn pretty early on,” Chris confessed of Clare’s season. According to the longtime Bachelor franchise host, there wasn’t really a “lightbulb moment” that alerted producers to the fact they may have to make adjustments as Clare expressed her feelings for Dale — it was a “culmination of things.”

“We thought, ‘Wow, this is really coming to a head quickly,'” he recalled. “I think our first thought was, ‘Well, this will continue on and it’ll ebb and flow like normal seasons,’ but when we realized there was only ebb and no flow, we thought, ‘We need to look at what we are gonna have to do.'”

Chris wouldn’t outwardly confirm whether Tayshia does in fact step in as the new lead, but did admit she was “always on the table” for the role.

“She’s incredible,” he raved of the 30-year-old Orange County native. “Not only is she stunningly beautiful, but she’s kind, giving, she’s an unbelievably sweet girl. She’s somebody I’ve actually gotten to know and gotten to be friends with over the last couple of years.”

Tayshia is the kind of woman “the show is predicated on,” Chris explained. “[She] is this amazing woman who seemingly has it all, except she can’t find love. She really wants to find love and she’s dated and she’s trying and it’s just not happening,” he added. “She is that diamond in the rough that any guy would be lucky to fall in love with.”

“She was always a fan favorite, she was always a favorite of the producers, and so she was always on the top of our list. Clearly we went with Clare, and that was a great choice, because she’s done a phenomenal job at falling in love,” he said. “But if things take a turn, then we may have to make a turn as well, and make a change. And will it be Taysia? Probably. We’ll find out next week.”

“I can tell you 100% next week will be very revealing as we really bring this to a head,” Chris added of the upcoming episode, which will air on Thursday, Nov. 5 due to the election. “You will get a lot of answers.”

In the meantime, Chris is celebrating his new collection with Manly Bands. The partnership was a “no brainer” for the host, given how it aligns with his love of good love stories.

“I do love love. I love weddings. I love when people get engaged. I have seen so many amazing love stories and engagements and I know how hard it is and how special it is to find that,” he explained. “When Manly Bands came to me and asked if I would be a part of this… I was just excited because they really allowed me to be really involved in creating these rings.”

“They are truly incredible quality, you will feel that when you get them, but they really allowed me to create this spectrum where you can find that ring that speaks to you,” he added. 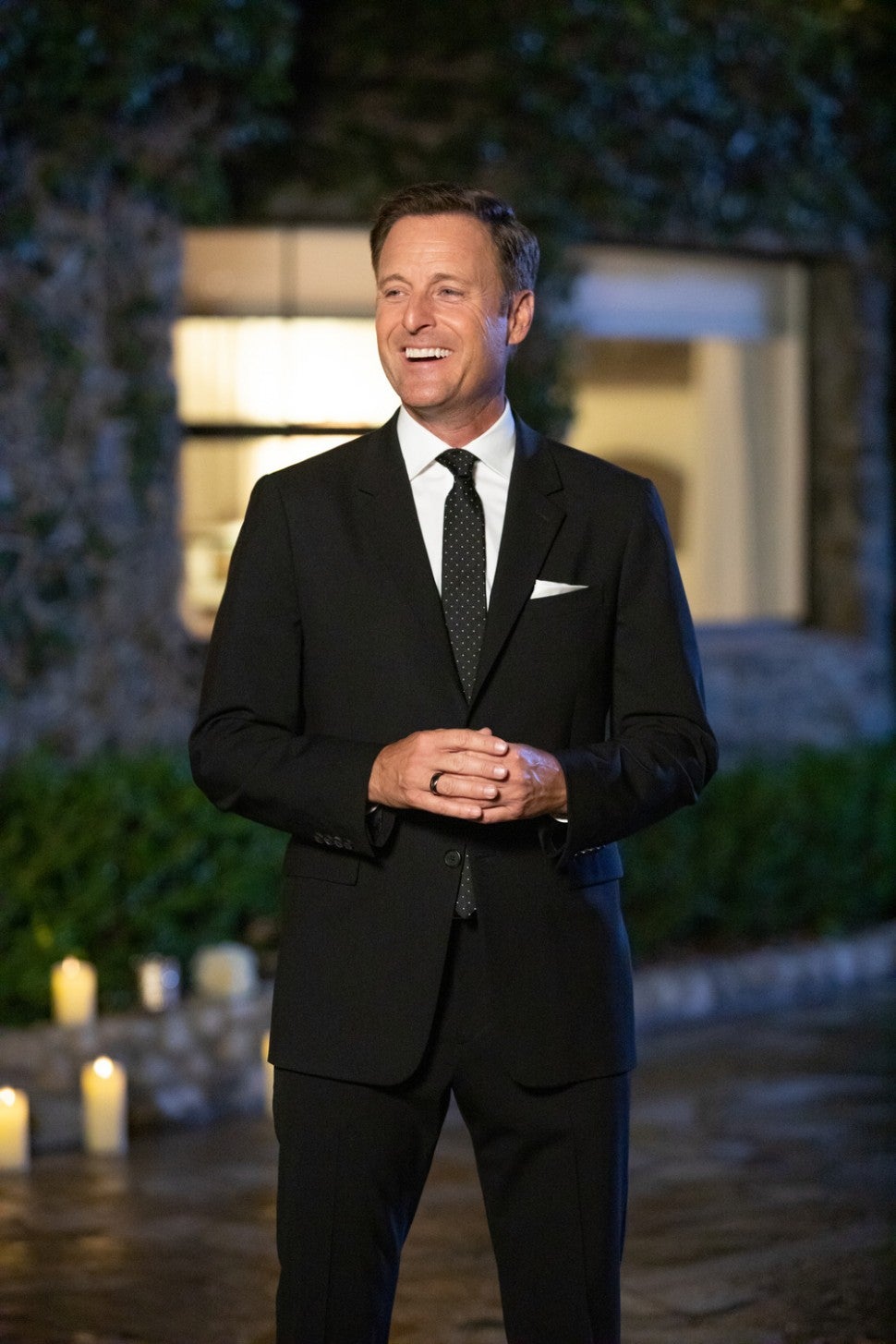 The Bachelorette airs Tuesdays at 8 p.m. ET/PT on ABC. Due to Election Day on Tuesday, Nov. 3, next week’s episode  will air on Thursday, Nov. 5. See more in the video below.