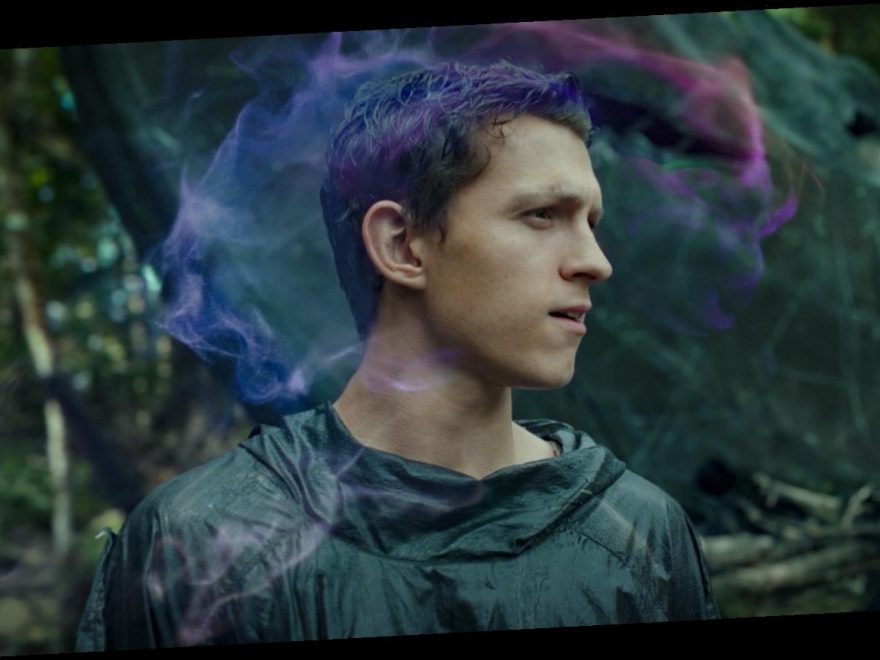 A $125 million studio movie about a human colony on a distant planet of retro-futuristic “McCabe & Mrs. Miller” cosplayers? Where every man’s internal monologue loudly emanates from his head like overlapping speaker feedback in a cloud of “Noise” so intense that you can see it take shape on screen (and where every woman was killed in a recent war with the indigenous species of humanoid monsters)? “Chaos Walking” could’ve and should’ve been the most arresting, unusual sci-fi blockbuster since “Cloud Atlas.” Or “Mortal Engines,” at the very least.

That’s what it seemed fated to become in 2012 when Lionsgate hired Charlie Kaufman to adapt the first installment of Patrick Ness’ trilogy and its Film Twitter-like premise into a potential franchise-starter. But the house that “Hunger Games” built appears not to have shared the books’ enthusiasm for messing with the YA formula, Kaufman left the project long before Doug Liman finally rolled cameras on it in 2017, and principal photography on the movie became the first step in the four-year process of sandblasting away everything that once made the source material so exciting. Despite its strange conceit and a few buried hints as to what a more courageous film might have done with it, the movie version of the first “Chaos Walking” book (published as “The Knife of Never Letting Go”) is such a dull and ordinary thing that it can’t help but get engulfed by the shadow of its own missed potential.

You don’t have to be familiar with the film’s turbulent production history to recognize that “Chaos Walking” has been compromised to the breaking point of basic coherence, as this prefab chunk of post-apocalyptic pablum shares its horny teenage hero’s ritualized determination to smother its true ideas and intentions under a layer of white Noise. And, much like Todd Hewitt — yes, this is an epic sci-fi story about a kid named Todd — “Chaos Walking” is very bad at doing that. The few clever bits of world-building in the first act betray a movie that’s deathly afraid of its own foundation, while the small handful of scenes that dare to listen for a melody amidst the cacophony of studio notes only reinforce how flat the rest of the piece sounds. In an age defined by plastic cover songs, blockbusters like “The Bourne Identity,” “Edge of Tomorrow,” and whatever nuttiness he’s about to shoot in outer space with Tom Cruise, have proven Doug Liman to be one of the few directors who’s still capable of convincing Hollywood to play jazz; that makes it all the more frustrating that “Chaos Walking” is the cinematic equivalent of auto-tune.

The action begins on a planet known only as the New World. 2257 A.D. Cool font. Played by “Spider-Man” star Tom Holland (who makes fine use of the same fidgety self-doubt that he brings to the Avengers), Todd is a normal kid who’s stuck inside a hormonal teenager’s worst nightmare, in that every primitive thought that passes through his brain is also broadcast to the rest of the world in a multi-colored shockwave that smokes around his head like the aurora borealis. The good news is that there are no girls around to hear it. The bad news is there are no girls around to do anything else either. So Todd spends his time working as a beet farmer with his adoptive fathers (Demián Bichir and “Sons of Anarchy” creator Kurt Sutter), and trying to impress the founder and resident alpha male of the small frontier town where he lives (Mads Mikkelsen plays David Prentiss, Mayor of Prentisstown).

Masculinity might not seem to have much value in a woman-less world with no clear hope for the future, but it’s what panicked men use to arrange themselves when they don’t want to hear themselves think. In Prentisstown, hiding your Noise is considered a sign of weakness, while letting people hear it unfiltered is a good way of getting yourself killed. David rules the roost on the strength of his BNE (Big Noise Energy); not only can he manipulate someone in perfect quiet, he can also  manipulate his Noise into holographic objects that are indistinguishable from real matter. Todd can too, sometimes — he summons a cloud of snakes when he’s threatened by his rival, the Mayor’s unloved son (Nick Jonas) — but the poor kid spends most of his energy repeating his own name like a mantra so that no one can hear what else might be going on in his head.

It’s hard to imagine how a woman might fare under these circumstances; hearing men think from a mile away might help keep her safe, but maybe not safe enough to compensate for the hostility she’d experience for her silence. Todd is about to find out for himself. A screaming comes across the sky, as a small spaceship crashes at our hero’s feet. The sole survivor of the wreck is the first woman Todd has ever seen. Her name is Viola (a clenched but commanding Daisy Ridley, dangerously close to being typecast as orphaned space girls), and she’s not safe there. Not because David wants to force her into repopulating his New World frontier — perhaps too grim a threat for a YA yarn like this — but rather because he doesn’t. He only wants Viola killed. That doesn’t work for Todd, who’d rather not die a virgin now that another option is on the table, and so the valorous teen steals Viola towards the second colony that’s rumored to exist on the other side of the planet, with the men of Prentisstown riding hot on their trail. 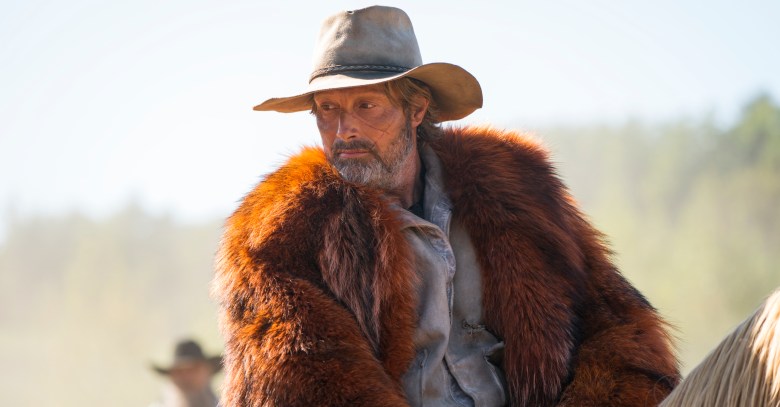 While Ness himself is credited on the script alongside Christopher Ford, the characters in this adaptation have lost any legitimate hope for transcending their archetypes by the time that Todd and Viola are on the lam together. The Mayor is a cowardly power-monger, his son is a standard-issue Don Jr. who needs a kiss from daddy, Todd’s adoptive parents are simple red shirts, and Liman shoots the world around them with a handheld approach that prioritizes verisimilitude over grandeur (only David Oyelowo, playing a demented priest on horseback, feels like he escaped from a version of this movie that honors the implicit violence of its premise). The impulse to ground this high-concept story with a lo-fi aesthetic is plenty understandable, but Liman swings too far in the other direction, as if he were actively trying to stamp out the most interesting aspects of the source material before they sparked into a fire.

The one-on-one scenes between Todd and Viola are slightly amusing in all of the expected ways; he’s always referring to her as “space girl,” thinking out loud about how pretty she is, and then embarrassingly repeating his own name as part of a cover-up. It’s a cute game of “don’t think about pink elephants,” if also benign in a way that leaves you wondering at the Olympic levels of cringe that Kaufman would have orchestrated into these moments.

As it stands, the cleverest wrinkles are only memorable for the eagerness with which the film hurries to iron them out, as “Chaos Walking” has no time for any thoughts that might complicate its ultra-bland hero’s journey; not Todd’s, not ours, and certainly not Viola’s, as Liman doesn’t even try to give any real sense of agency to his female lead in a movie where she is — by design — an unknowable flesh object. It’s not much of a spoiler to reveal that other women eventually show up, but watching someone of Cynthia Erivo’s stature get whittled down to a walk-on part is enough to make you wish that “Chaos Walking” had just punted the co-ed part of its cast to the extremely not happening sequel this movie tries to earn through its monastic self-denial. And so a fascinating book about the moral valence of male thought (recently vivisected in exquisite detail by Kaufman’s “I’m Thinking of Ending Things”) and the need to mediate it through action becomes an unfocused action film about people chasing each other around grassy fields in cool space ponchos and trying to avoid the big things that inevitably fall from the sky in the third act.

Flecked with a lesser version of the “last girl on Earth” urgency that made “Children of Men” so compelling, “Chaos Walking” most clearly hints at what could have been when it eschews typical YA tropes and embraces its secret identity as a weird and verdant neo-Western (the brunt of it was lensed in the lush forests north of Montreal). One mind-popping shot of Mikkelsen’s crew sweeping through the New World on horseback, their Noise trailing behind them like vapor trails, is all it takes to make you dizzy at the genre-mashing possibilities that were available to Liman here. And yet, this critic only has himself to blame for hoping that “Chaos Walking” might have deviated from the beaten path; original as it seemed on paper, what could better crystallize the spirit of modern studio filmmaking than a mega-budget movie about someone who’s mortally afraid of projecting a single provocative thought?

Lionsgate will release “Chaos Walking” in theaters on Friday, March 5.