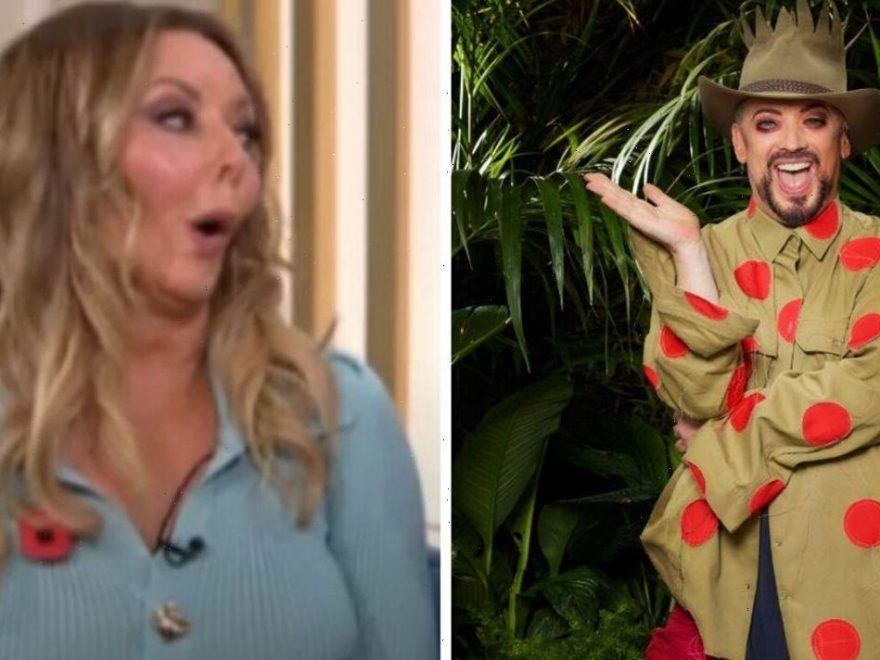 Carol Vorderman and Matthew Wright, who have both appeared on I’m A Celebrity…Get Me Out Of Here! shared their own experiences of the show with Holly Willoughby and Phillip Schofield. Appearing on the This Morning sofa, the pair discussed this year’s line-up as the ITV show returns to Australia for the first time in two years.

Carol even shared all of the celebrities have code names before they enter the jungle.

“So all of the things we’re seeing in the newspapers, they aren’t seeing.

“And also beforehand, you’re given code names. So you have your I’m a celebrity code name.”

“Do you remember yours?” Carol asked Matthew before revealing hers was: “Pride.

“So if you are somewhere and let’s say you’re doing the filming for the title sequence, you know when you’re spinning around, you are hidden in a car around the corner until [the other celebrities] have disappeared.

“They keep it so secret from each other.”

Turning their attention to which celebrities are taking part in the show this year, Matthew chipped in: “As soon as Boy George was signed up I thought, ‘That’s this series sorted’ because he’s really quick-witted.

“I can’t imagine the Boy George who lives in this massive palace in Hempstead…I can’t imagine him for one minute enjoying living in a sort of bivvy bag.”

“He says it’s going to be a breeze compared to going on a world tour,” Phil replied.

Carol appeared to scoff at Phillip’s remark as she added: “My favourite moment is when the boys scream, I love boys screaming.”

Holly and Phillip proceeded to show a VT of the celebrities in a first look before they enter the jungle.

The stars explained to the camera what they were scared of about taking part in the show.

Matthew went on to admit he had therapy before his stint in order to prepare himself.

“I arrived and I was terrified. I was so terrified of my fears. that I had treatment before I went in,” Matthew explained. “CB…or whatever it was to try and get ahead of it.”

He said his main fears were spiders and heights, adding: “I was neurotic with fear and the first day in the jungle just was just a head spin of awfulness.

“But once you’ve done it, you feel okay and the nerves started settling down.

“I think that as the process goes on, if you are a fearful person, you’re either going to be out or you will get on top of it and it’s had a lasting effect for me.”

“Yes it does, doesn’t it?” Carol weighed in. “I thought I’d be clever, right? Tell them what I wasn’t frightened off.

“Eating trials are still funny. I mean, they are just funny, the whole thing is just hilarious.”