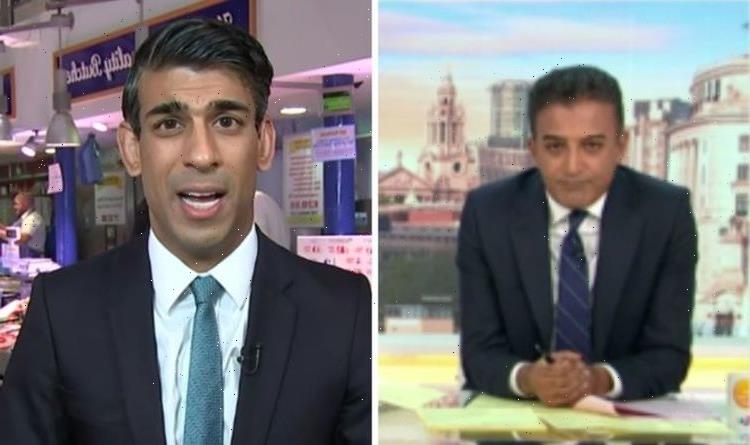 Chancellor Rishi Sunak appeared on Thursday’s Good Morning Britain to be quizzed by hosts Adil Ray and Charlotte Hawkins over the Budget which he announced to the nation on Wednesday. However, the interview soon turned heated, with Sunak hitting back at Ray for interrupting him several times. Furious viewers took to social media to call the ITV host “rude” for cutting the Chancellor off mid-sentence.

During the tense exchange on Good Morning Britain, Sunak told Ray: “Can you let me finish?”

ITV viewers quickly took to Twitter to lash out over Ray’s numerous interruptions during the interview.

Kaz commented: “What gives Adil the right to be so rude to Rishi? It’s not big and it’s not clever. Fool. #gmb”

Sad World added: “Adil Ray [is a] very personal and [has] biased interviewing tactics… But @RishiSunak is far more intelligent than you.”

Mr Wilson remarked: “This Adil bloke is f*****g rude. Personal questions are not appropriate IMO. Glad Sunak is not taking any s**t from him #gmb”

“You can tell he has no journalistic training, aren’t they supposed to be completely impartial and unbiased? What’s with bringing up personal finances with Rishi Sunak? Get him off.”

Michelle Collins commented: “Adil, let Rishi Sunak finish his answer to your question, we can’t hear if you keep speaking over him.”

The tension escalated between Ray and Sunak during the interview when the ITV host probed the Chancellor on citizens who work in the financial sector “only living in and around London”.

Sunak was trying to explain to the host that two-thirds of people who work in the financial services industry actually work outside of London and the South East.

However, he admitted he was struggling to hear what Ray was saying as he kept cutting him off while he attempted to answer his questions.

“I care about protecting those jobs in that industry across the country.”

During another section of the tense interview, Ray blasted the Chancellor over Wednesday’s Budget announcement “hitting the vulnerable the hardest”.

Ray told Sunak: “We know the most vulnerable people in this country are those that are going without food.

“What a disgrace that so many of our fellow citizens will this morning open their fridge and cupboard and find no food and have to go to a food bank.

“You had an opportunity yesterday in front of the nation to put that right, and you didn’t.

“You didn’t solve that problem directly – why not?”

Sunak insisted the Government has put a lot of measures in place to help the most vulnerable with their energy bills.

He explained the Government cut taxes for those on the lowest wages and raised the national living wage to £9.50 an hour.

Good Morning Britain airs weekdays between 6am and 9am on ITV.