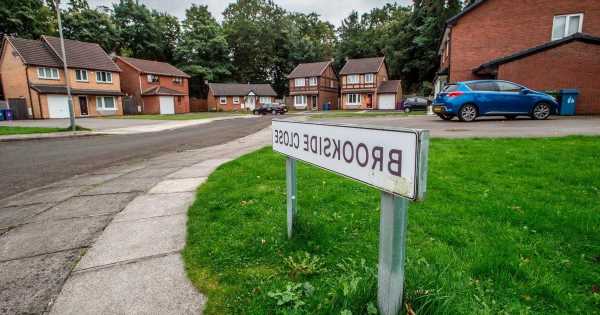 Brookside was unmissable TV viewing between 1982 to 2003 – but do you know what happened to the famous estate?

The Channel 4 soap followed the lives of characters living on Brookside close, including The Corkhills, The Dixons and The Grants, to name a few.

Since the soap ended nearly 20 years ago however, the former set has now become a regular residential street, with the people living there regularly seeing fans of the soap travelling to visit the iconic location.

On the 40th anniversary of Brookside's first episode (November 2, 1982), Daily Star takes a look at the Brookside Close set now.

What happened to the set when the soap ended?

When Brookside ended on November 4, 2003, the soap set was closed off to visitors and sadly fell into disrepair.

It is reported that the close was sold to an anonymous purchaser at auction in December 2008, after spending years lying vacant after the previous developer, who bought the set from Mersey Television in 2005, went into administration.

The Guardian reported at the time that the set lot was bought for a gigantic £735,000 by the anonymous purchaser, after it originally had a guide price of £550,000.

The auctioneer who sold the set lot told back in 2011 said: "This is one of the highest profile lots we have offered for some time."

A spokeperson for auctioneers Allsop also said of the bidder: "It's a positive result and I think the guy who's bought it will probably do some good for the close.

And they did do good for the close, as after a petition by Brookside fans, the famous close underwent major refurbishment works to transform the derelict set into homes.

The 13 properties that make up the street in West Derby, Liverpool were fitted with new brickwork, new timber, staircases, plumbing and wiring.

After three years of building work came to an end in 2011, the houses were finally restored and ready to welcome their first real life tenants.

The soap may have ended nearly 20 years ago, but Brookside Close still looks as iconic as ever following the refurbishment works.

The famous sign is still in place at the end of the street, with lots of fans driving past and stopping to have a photograph.

Each of the family homes still stands in their original places too, and fans will still be able to remember and point out which home belonged to which characters.

However, one noticeable difference from the soap to present day are the house numbers.

The numbers have been changed since their time on screen, with the house each labelled with an odd number, instead of even numbers.

Despite the famous sign still being at the location too, the street has simply renamed Brookside, rather than Brookside Close.

The interior of the buildings have also changed significantly in order to make them fit to live in, with the former costume departments and sets now home to many residents who have lived at Brookside for a number of years.

Lee Brady, who organised the campaign to see the soap transferred to DVD, told Daily Mail at the time of the refurbishment works in 2011 that he was delighted the location back to its former glory.

He said: "I'm just thrilled that Brookside Close is now looking its former self.

"After the close looking so sad, wet and neglected for the last six years it looks all fresh again."

He added: "I think its a massive part of Liverpool television history and to see it the way it had been allowed to deteriorate made a lot of fans, including myself, fear it could be demolished."

What do the residents say who live there?

There's no doubting that it must be pretty interesting to live in such a memorable location, and the residents who live there have become used to Brookside fans knocking on their doors or visiting the street.

When the Liverpool Echo visited the street in 2020, one resident revealed that he lives in the house where one of the soap's most famous storylines took place.

He said: "Our house was where Trevor [Jordache] was buried under the patio, in our garden. There's no bodies in there."

"There have been quite a few tourists coming to see it the past and the ex-actors have come back to do some bits," he added, revealing that fans still knock on the door to ask if they can see the famous patio.

While the residents say that it was "surreal" to be living at the location at first, their life on the street is "normal" now – with one adding that he didn't move there because of the soap.

Instead it was because the house fitted all the criteria they were looking for in a home.

The residents also revealed that they still find it quite a surprise when fans visit the street – more than 40 years since the soap first aired.

Another resident said: "It's taken me by surprise, I never thought it would be like this. I knew the programme had finished quite a long time about but it still happens.

"You might be swappng your gas or electric and you get people saying 'oh is that where they filmed that?'

"One girl said 'I'm speaking to someone who lives in Brookside, I must tell my friends!"

Have any of the stars visited the location since?

Lots of the cast of the soap have since returned to the set that made them stars throughout the years, including X-Factor's Ray Quinn.

Ray Quinn began his acting career playing young Anthony Murray on the soap between 2000 to 2003, before coming second to Leona Lewis on The X-Factor in 2006.

However, during the Covid-19 pandemic, he revealed to The Mirror that he had started working as a carpet fitter and joined the family trade while work in the entertainment industry was put on pause.

Ray explained that part of his job was to lay carpets inside the houses on Brookside Close, saying: "It was the most humbling feeling. Fond memories came flooding back.

"I had to get a picture, it was like going back in time."