Don Cheadle most recently suited up as War Machine in “Avengers: Endgame,” and as the the self-made, self-destructive Maurice “Mo” Monroe in Showtime’s “Black Monday,” but the greatest metric of his success can be summed up in one word: No.

For the better part of the last decade, Cheadle has said yes to television, specifically Showtime, starting with “House of Lies,” which ran for five seasons and earned him four Emmy nominations, and one Golden Globe win in the Best Supporting Actor – Series category. He returned to the premium cabler this year for the delightfully ugly depiction of 1980s Wall Street as Mo, the unscrupulous founder of a renegade Wall Street firm in the year leading up to Black Monday, the day international stock markets crashed in 1987.

No-holds-barred and suitably late-’80s flamboyant, it’s unlike any character Cheadle has played. “I was attracted to a character and a storyline, a show, and a home that was a good place to work at Showtime,” he said of his “House of Lies” casting. “When ‘Black Monday’ came along, it was the same sort of metrics that made me decide to do it. I love the character. The story was unique and interesting and something I hadn’t seen before, and so it was just kind of an easy yes.”

Similarities between Cheadle’s fearless portrayal of fast-talking, hard-living Mo in “Black Monday” and “House of Lies” management consultant Kaan are inevitable. However, the characters are distinct.

“Marty has a conscience, but Mo is all id, which means he’s kind of unhinged, compulsively narcissistic and malignantly so,” Cheadle said. “And maybe he’s arrival is right on time, unfortunately, because we have real-life government leadership that just might appreciate that kind of pathology.” 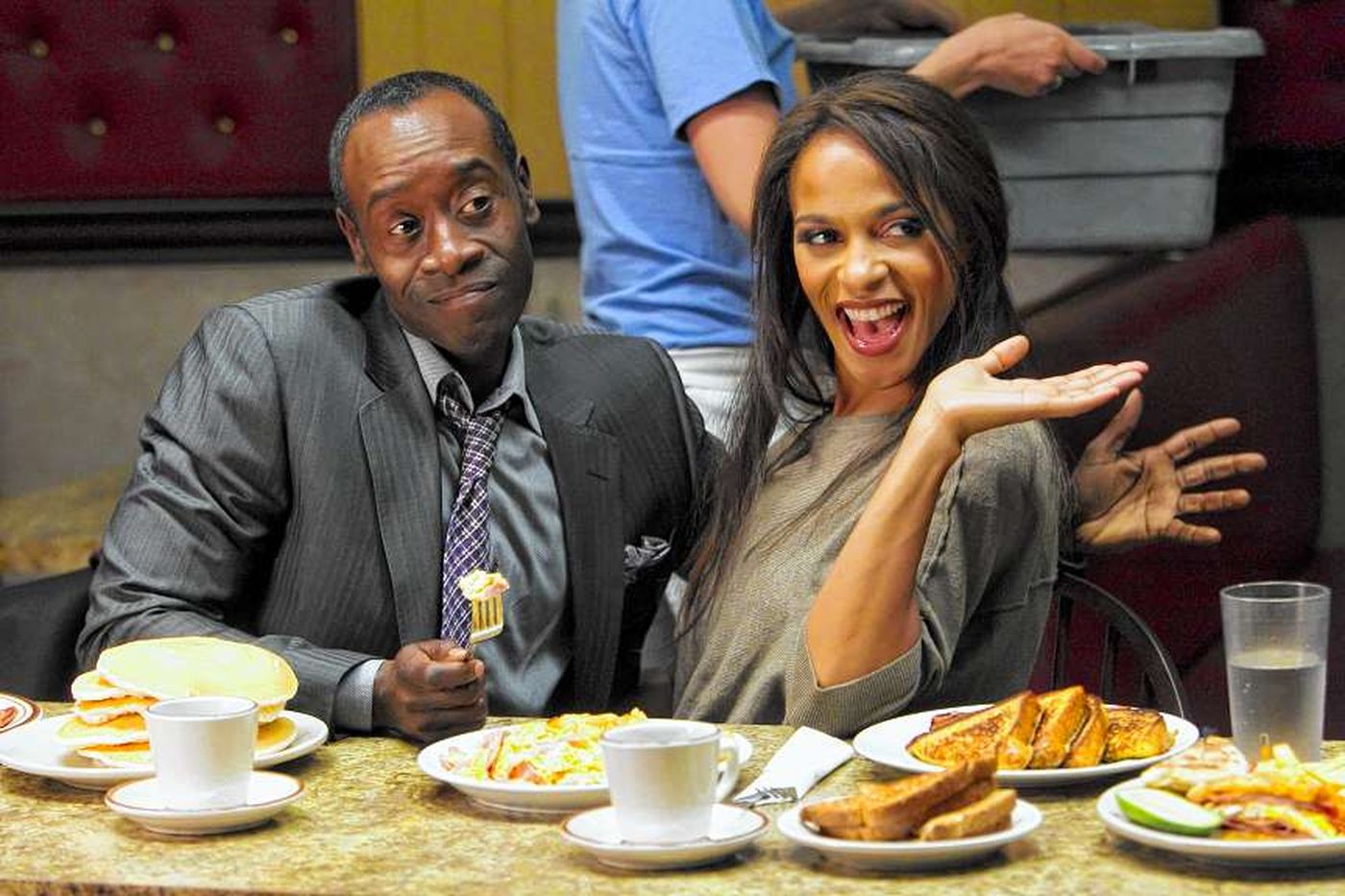 Don Cheadle and Megalyn Echikunwoke in “House of Lies”

Like President Donald Trump, Mo has a pomposity, gregariousness, and hungers for power; ethics are optional. The character is deliberately unlikable and there’s a mystery in that audiences aren’t told much about how he came to be who he is. Still, he’s engaging, if only to see what disreputable thing he might do next.

Other actors might be ambivalent about taking on this kind of antihero — especially actors of color who may feel burdened with a responsibility to “positively” represent an entire group of people. But for Cheadle, it was a rare opportunity to subvert expectations. “I laughed all the way through while reading the pilot,” he said. “Although I was also a bit shocked by some of what was in the script, thinking to myself, ‘Are they really going to allow us say and do all this crazy stuff that’s in it?’”

It’s the kind of dynamic character that may not have been available to Cheadle pre-“Peak TV,” as networks now seemingly embrace diversity and inclusion. And it’s a rapidly evolving environment that Cheadle understands and is adjusting to. “I think that a lot of writers and actors have made the move to television because they’ve see the writing on the wall, that fewer original scripts are being made,” Cheadle said. “Because we want to take on stories and characters that are more interesting, complex and even controversial, which is fun for actors and I think writers as well. And TV seems to have become the place where artists are kind of free to play with a lot of different kinds of ideas.”

Ideas like the outrageous fictionalized account of how a group of madcap, self-loathing outsiders took on the old-boys club of Wall Street, upended existing mores, and eventually crashed the world’s largest financial system. That the head of this firm is a black man, already an outsider, thriving in a space that’s been historically exclusive to white men, is not lost on Cheadle. “We wanted to be careful to not make it an ‘issue’ show, but we had to be authentic, so it was a matter of sneaking in ideas here and there, whether it’s dealing with racism, homosexuality, the gender pay gap, sexual harassment, and other things that were and still are relevant today, especially in the workplace,” said Cheadle. 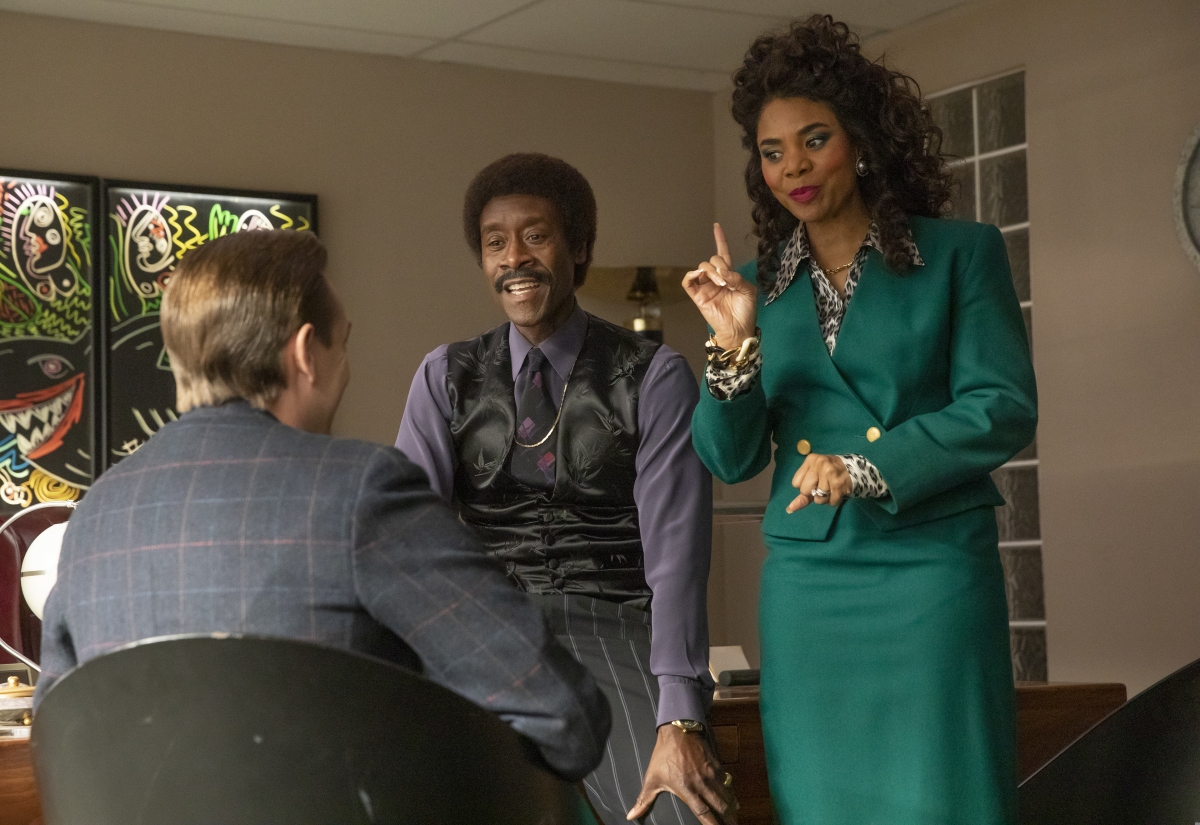 That insistence on authenticity also meant the use of language that risked being offensive to some. “There was definitely always this ongoing negotiation over how far we could push the envelope, but there were also certain ways of speaking that needed to be true to the times,” Cheadle said. “For example, how they talked about women, especially in what was, and probably still is, a male-dominated space. Also how they talked about black people and other people of color, how they talked about gay people. That was the ’80s. That’s how it was, and we had to make sure we got it right, but without being exploitative.”

Despite premiering to mixed reviews, with the consensus calling it more of an exercise in style over substance, “Black Monday” was renewed for a second season by Showtime, returning in 2020. With season one now in the history books, Cheadle has a lot of time to “go play” elsewhere as he put it, until production begins on season two.

A platform agnostic performer, he revealed that he almost starred in a play last year, although he was mum on details. A self-proclaimed theatre geek, Cheadle does plan to return to the stage at some point, although for the right project. The last time he appeared in a play was in Pulitzer Prize-winning playwright Suzan-Lori Parks’ “Topdog/Underdog” 18 years ago. Although other opportunities have presented themselves since then, it’s just been a matter of timing.

And an occupying concern for the actor is that he not be repetitive, nor pigeonholed. The challenge has always been to play interesting characters in compelling stories. “It’s always exciting to me to try and inhabit someone who is nothing like me, and try to find a way into that character’s psychology, rhythm, and so on,” Cheadle said. “That’s why I got into acting in the first place — to try and disappear into different characters. That was the draw for me.”

“My kids are now at an age that allows me to be gone for many months at a time, which opens up possibilities,” he said. “In fact, my life in general as of this moment, has opened up, and I’m able to consider other ways to work and other kinds of projects I can work on.”

With his ability to say “no” comes the authority to say “yes.” “It was important for me to protect family throughout my whole career, and not having to sacrifice anything,” Cheadle said. “And I’m glad it all worked out. I’ve had no major scandals, no huge mistakes, and I’ve been very fortunate.”