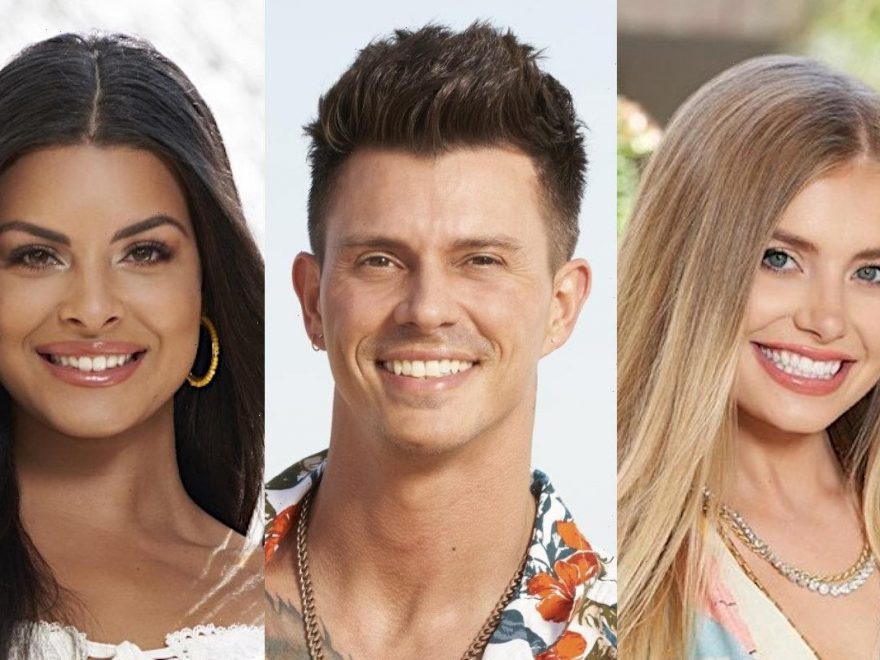 Demi sets her eyes on Kenny following her failed date with Brendan Morais, making Mari, who is coupled with Kenny, feels unhappy with Demi’s attempt to steal her man.

AceShowbiz -A love triangle was born in a new episode of “Bachelor in Paradise“. Airing on Monday, August 30, the episode saw Demi Burnett setting her eyes on Kenny Braasch following her failed date with Brendan Morais.

However, her move caused tension with Mari Pepin as Kenny was coupled up with Mari. The latter was not happy with Demi’s attempt to steal her man. Later in the episode, Chasen Nick arrived with a date card. He came to Mari to ask about where she stood with Kenny and if she wanted to go on a date with anyone else.

“I do think we’re not necessarily on the same page about whether or not to explore other things,” Mari told her. “Kenny has told me that he’s very much not interested in anyone else. But I also don’t want to block myself from something else because at the end of this, I’m here to find my person.”

She added in a confessional, “Kenny and I have kind of said we wouldn’t go on dates with other people, but I don’t want to close myself off and potentially miss out on somethign that is meant for me. Chasen is very cute and I’d be open. If he asked me, I would go.” Eventually, Chasen asked Deandra Kanu on a date instead.

Mari then began to second-guess where she stood with Kenny. Pulling him aside, she told him, “We have something realy good and I really like it and I’m happy. I want to keep nurturing this and growing this. This is my focus.” She continued, “But it’s just like, at the end of this, if we’re together, I want to be 100 percent sure. I don’t want to have any regrets at the end. So if I am asked on a date, I don’t want to immediately be like, no, not happening.”

Kenny told Mari that he wanted the freedom as well and that made Mari wondered if she made a mistake. “I think things might be a little awkward [now],” she said. “He told me, ‘If you’re going to do that, then maybe I should go explore other relationships.’ So now I’m like, ‘Did I just f**k things up?!’ “

Mari then asked Demi for advice. While Demi did give her advice, the former also planned to get closer with Kenny. “Sorry, I’m going for your man!” Demi declared in a confessional. “It’s my opportunity. It’s what I’m here for. Kenny is so sexy. He likes to be naked, I like to be naked, so I wanna have some fun with that.”

The nightmare came earlier for Mari as she witnessed Demi and Kenny made out. “I don’t know what to do. I don’t know what to think,” Mari said. “Demi and I have been cool. She was giving me advice and then she turns around and does this and I’m right there watching. He said he’s all in on me until I told him I would be open to going on dates. Here I am thinking maybe he’ll plan something cute and do something for me and show me he really wants to be with me, but this is the exact opposite.”

When Demi surprised Kenny with a birthday celebration, Mari commented, “Who does she think she is?! It’s kind of comical that she’s trying so hard. Demi is not what Kenny is looking or. Maturity-wise, she’s definitely not what he wants.” Feeling betrayed, Mari confronted Demi and they ended screamig at each other. “I don’t know if Mari needs a lesson of how ‘Paradise’ works, or how we’re all supposed to be dating each other and figuring out who we like most, but I think she needs a lesson in hypocrisy,” Demi said. “She wants to have her cake and eat it, too.”

Kenny and Mari then had a intense conversation with Mari telling him, “I just wanted to be able to say yes to a date if someone came down with a date card and asked me. That was it.” Kenny didn’t understand why Mari wanted her options to be open yet she didn’t Kenny to feel the same. Eventually, Kenny ended things with Mari.

“I know what it’s like to have good things and not commit to them,” he explained. “Then they go away and they’re gone and you regret it. It’s sad to me because maybe she did feel the way I felt but it became too toxic and it just needs to go away. I just think the healthy thing to do is just be done. So now there is nothing there.”

Kenny was later seen going into the boom boom room with Demi to hook up. Mari, meanwhile, realized that Kenny was the one she wanted and hoped to restore everything at the cocktail party ahead of the next rose ceremony. However, Kenny announced that things were over between him and Mari, prompting Mari to call him out.