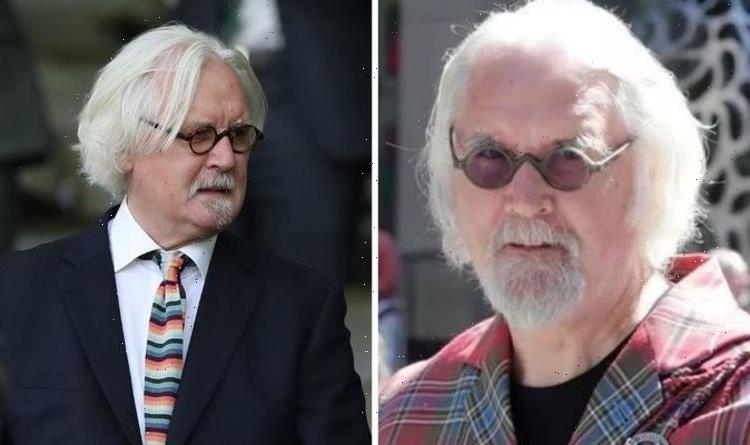 Sir Billy Connolly jokes about people 'hurying' to give awards

Billy, 78, appeared on The Graham Norton Show, where he revealed he can no longer write and has to try to record everything. The actor told BBC audiences he was “heartbroken” as it means he can no longer enjoy writing letters to people. He added his condition has rendered his writing “totally illegible”.

He told Graham: “I have lost the ability to write, and it breaks my heart as I used to love writing letters to people.

“My writing went down the swanny and is totally illegible, so I had to find a way to record everything, but then the recorder didn’t understand my accent so it kept collapsing and my family would have to sort it. It was a club effort!”

He continued: “I have good days and bad days. It’s creeping up on me and it never lets go.

“I walk like a drunk man and have to have help. So, life is different, but it is good.”

The Scottish star had to retire from performances five years after being diagnosed with Parkinson’s.

He has, however, continued to record programmes and appear on TV shows.

The neurodegenerative disorder is caused by a loss of nerve cells in a part of the brain and can cause problems with shaking and stiffness that get worse over time.

Speaking on chat show The Graham Norton Show, Billy appeared via video link from his Florida home to chat about his new autobiography, Windswept & Interesting.

He also updated fans on his conditions when he appeared on ITV’s Lorraine, where he detailed how he focuses on the positives.

“There’s good days and there’s bad days… and the good days outnumber the bad days,” he explained to Lorraine Kelly.

“I’ve got nothing to complain about. Somebody once told me any time you’re not feeling very well, think of the kids in the cancer wards and that straightens me out, rapid.”

On his decision to make the move from New York to Florida, the much-loved star stated: “I was living in New York, and with the Parkinson’s, I was out of balance a lot of the time.

“In the winter I was sliding and falling on my backside all the time.

“So Pamela [Stephenson] did it. She just told me we were moving.

“It wasn’t a choice of mine. She just said, ‘Right here’s the new address, learn it’.

When asked by the 61-year-old host about how it was to win a number of lifetime awards, he quipped: “They’re hurrying up in case I die!”

He added: “I’ve had a fabulous career. Nobody could complain about it.

“Jammed theatres with people roaring with laughter – that’s all I wanted and that’s what I got. I love it.

“I have no intention of doing the comedy thing again but I might do something here and there.”

The Graham Norton Show airs on Friday at 10.35pm.