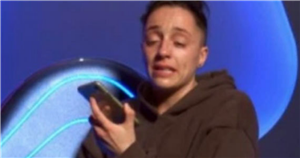 Big Brother Australia has received backlash from viewers, after they aired a contestant discovering her grandma had terminal cancer on Wednesday night’s show.

BB participant Jess Trend was evidently distraught and in floods of tears as she received a phone call from her brother who let her know the devastating news of her grandma’s diagnosis.

Jess shared her sad news in front of cameras in the Big Brother Diary Room while her brother was heard breaking the agonising news while on loudspeaker.

The brother said: "Hey Jess, we need to tell you that nanna isn’t doing too great. They found out that it was cancer, a tumour." "There’s not very long. She’s going to a better place. She gets to go hang out with Pa again."

The sibling added: "We’re very proud of you, and we all want you to stay as there’s nothing you can do."

After hearing the heart-wrenching news, Jess was clearly distressed by the whole ordeal.

"Just tell her I love her, so much," the contestant responded.

But the emotional rollercoaster didn’t stop there for the housemate, as she returned back to the Diary Room to say her final goodbyes to her nan. "You are just the most magical human and my heart is yours. I just want you to know that… my footy, and all that I do these days. It’s all for you."

Though Big Brother producers and TV bosses wanted to depict the realities of living in the house, several viewers were angered that Jess’ pain was shown on national television.

Fans of the show blasted Seven Network for showcasing a personal moment that should have taken place in private.

Airing their anger on Twitter, one viewer wrote: "100% an invasion of privacy showing us Jess’s grandma passing. Felt sick knowing they are exploiting this for views."

Another viewer penned: "Is this really worth showing on tv. It’s a private family matter BB…have some respect for Jess’s family and Nan."

While a third viewer also shared a similar view and said: "Jess shouldn’t have had to say goodbye to Nana on camera – somethings are sacred @BigBrotherAU."