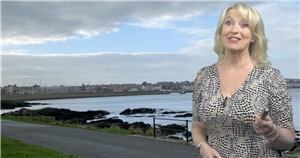 BBC Breakfast star Carol Kirkwood couldn't help but blush on Thursday as Naga Munchetty appeared to challenge her knowledge of her career.

The weather presenter was getting ready to let viewers know what they could expect from the day when the conversation turned to the clicker she uses to change the slides.

Naga, joined by Jon Kay on the red sofa, was chatting about the recent news that Apple will stock tools and spare parts for customers to make their own repairs to their products.

"I suppose this is kind of in response to criticism that we're told to constantly update our phones, and it's seen as Apple wanting you to spend more money," Naga explained. "Whereas this way it's more sustainable."

Jon remarked: "You've got to be brave, though, to give it a go!" as Naga quipped: "Carol would do it!"

"She's got enough to deal with with the little thing she clicks in her hand!" Jon fired back. "Can you repair that?"

As Carol appeared on screen, she explained: "Absolutely right. And when this goes wrong, Jon, it is devastating."

Later, Jon wanted to know the exact name for the clicker, as he quizzed: "What do you actually call that little thing that you use? It's just a clicker?"

"A clicker," Carol responded immediately. "It's just a clicker, Jon, you're absolutely right."

But Naga wasn't impressed with her response, as she pressed: "Is that its official name, Carol? Or is that your name for it?"

Carol answered in the affirmative, which is when things got a little frosty between the pair as Naga said: "Are you sure?"

Blushing, Carol turned her clicker over in her hand as she blurted: "I'm positive, Naga! I'm just frantically checking it now!"

Naga collapsed into giggles on the sofa, as Jon added: "I've always wondered. Thank you very much indeed, Carol."

But that wasn't the end of the discussion, as it turned out consumer expert Felicity Hannah had managed to repair her own iPad using gaffer tape and a dose of help from her husband.

And, ever the journalist, Naga couldn't resist cheekily pressing her on the subject.

Jon began the conversation by asking: "We're talking as well this morning about Apple letting people repair their own goods in the future and buy repair kits. We were just having a word with Felicity before we came to her on air – and you've actually done this, you've repaired your own kit?"

Felicity responded: "Well, if I say I've actually done this now, my husband might be watching and he will know that he played a small but significant role in that!

"We fixed the screen on an iPad, we did it ourselves. We did it… well enough, I think! We had to use some gaffer tape to really keep it going, and it did last a few more weeks after that! So I'm gonna take that as a win."

Naga questioned her through her laughter: "Are you really gonna take that as a win? With gaffer tape and a few more weeks?"

"It was at the end of its life and we got a few more weeks out of it!" Felicity insisted, as Jon quipped: "I'm not going to ask you where you bought it or how you paid for it!"