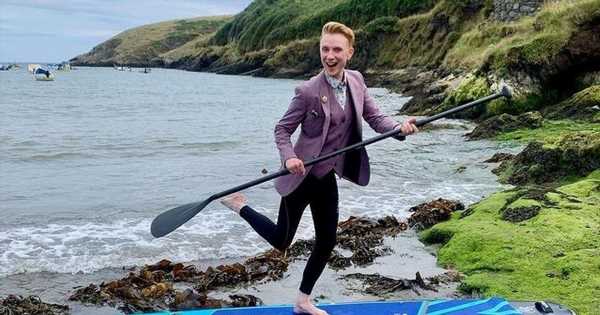 Owain Wyn Evans captured the hearts of the nation with his unique weather presenting style when he first hit BBC channels in 2012.

Beginning his career on BBC Wales, Owain, 37, has since become known as the ‘drumming weatherman’ after debuting his musical skills on camera – even appearing on The One Show to surprise guests with his talent.

Back in February 2021, Owain made his BBC Breakfast debut and stepped into Carol Kirkwood’s shoes after being named lead weather presenter on BBC North West Tonight.

He’s even made appearances on shows including Michael McIntyre’s quiz show The Wheel and RuPaul’s Drag Race UK.

Now he’s tipped as the ‘heir apparent’ for Carol Kirkwood’s job whenever she decides to leave it.

That might not happen any time soon, of course, as Carol told RadioTimes in 2018: "I would never give up the weather on Breakfast, if they showed me the door, I’d hang on by my fingernails."

But what about Owain’s life off-camera? From his sweet relationship with his doctor husband to his surprising link to Countdown star Carol Vorderman, we delve into Owain’s life away from the airwaves.

In 2017, Owain tied the knot with his long-term partner Arran Rees in a sweet ceremony.

He and Arran – who then worked for the Victoria and Albert Museum in London – got engaged back in 2013 in Las Vegas.

The wedding even included a giant cake… made of cheese.

They celebrated their nuptials with a sweet Twitter post, including a photo of the two snuggled side-by-side showing off their wedding rings with matching smiles.

Owain wrote: "We are exhausted… look at us! Thank you for your lovely messages. You are amazing. Had a fabulous day with my @arranjrees", adding a diamond ring emoji.

The duo honeymooned in Portugal, and have set their sights on adopting to start a family.

Speaking in 2014, Owain admitted: "Arran and I have spoken about children. We would like to adopt when the time is right.

"We would not mind whether it was a boy or a girl. There are so many kids that need to be adopted."

Earlier this month, Arran officially became a doctor, securing his PhD and celebrating with Owain over dinner.

Owain wrote on Instagram: "Congratulations to my wonderful husband @arranjrees who is now… Dr Arran Rees! The last 4 years really have flown by, and tonight we raise a glass to his PhD."

His research project focused on developing social media collections in museums, acquired from the University of Leeds.

As well as being a regular co-host on former Countdown star Carol Vorderman’s Saturday programme on BBC Radio Wales, Owain has also joined her on a tour across Wales teaching her to speak the native language.

And the pair are close friends away from their professional lives, too – with Owain even joining the brunette beauty on her latest paddle boarding adventures.

Looking fabulous as ever, Owain donned a wetsuit underneath a bright purple blazer, waistcoat and blue floral shirt to take to the seas – we sincerely hope he didn’t end up ruining that outfit!

Carol, meanwhile, could be seen giggling alongside him in a clinging wetsuit of her own, as they both grinned for the camera – clearly loving each other’s company.

Owain cheekily wrote alongside the snap on Instagram: "Ahoy dahlings! Who said sartorial elegance can’t be paired with activities on the ocean wave?

"Although beautiful, a waistcoat and jacket combined with the elegance of a neoprene trouser didn’t quite work out for me during my first paddle boarding lessons with queen of the coast mein cyntaf DAHLING @carolvorders and nautical wonder @arranjrees."

Owain has candidly admitted that the pair "struggle to get work done" being such close pals, telling Express.co.uk: "If we haven’t seen each other for a while, we kind of need to get a lot of stuff and excitement out of our system.

"We’re completely wound up in each other’s company, it’s one of the easiest shows to do when you’re doing it with a friend."

Despite rising through the ranks at the BBC, Owain has admitted that his initial audition didn’t go quite as well as he’d hoped.

The presenter ended up swearing in front of the panel in one huge blunder.

While auditioning for Welsh language children’s show Ffeil, aged 18, Owain left "feeling deflated" after knocking over a bottle of water and swearing in response.

Speaking to Manchester Evening News, Owain explained: "I left it feeling deflated… I just felt there was no way I was going to end up getting the job."

Owain first went viral with his drumming skills after drumming along to the BBC News theme – and later replicated the rendition for BBC North West Tonight.

Earlier in life, Owain was a semi-professional drummer – but now just considers it a hobby in between presenting gigs.

Speaking to WalesOnline, Owain said: "I didn’t enjoy school very much at all but I remember when I saw this drum kit, owned by one of the dads of the kids in my school, and I saw him drumming and I thought: ‘Oh… I love that’. I remember it to this day."

His parents soon invested in a secondhand drum kit for him to practice at home, as he chuckled: "They then had to put up with me playing the theme of Joseph and His Technicolour Dreamcoat on heavy rotation."

Owain admitted candidly in the past that his first ever TV job made him feel like he "had to go back into the closet".

Though he had already come out as gay to his parents and pals, the presenter felt that such a "high profile job" as working on Welsh language programme Ffeil made him feel as though he had to hide his sexuality.

Speaking to the BBC to mark LGBTQ+ history month earlier this year, Owain said of his first TV job aged just 18: "I had come out at this stage but I felt like I had to go back into the closet in many ways, because this was when there were four channels really on the TV and it was quite a high profile job, and I didn't feel comfortable being myself."

He explained to Lancashire Post that he felt “gay shame” and didn’t want to "jeopardise" the opportunity.

"So I wouldn't talk about my sexuality and I wouldn't tell people basically, and it was all a big secret again."

But Owain added: "I was lucky to have some great people who I worked with who made me feel comfortable with being me, so I was then able to come out again, the second time."

He also explained that his parents found his coming out "difficult initially", but they were "willing to learn".

Owain even said he used to buy "butch-looking cars" to overcompensate for his sexuality – but now he fully embraces his sexuality and self.

He told Lancashire Post: "I'm delighted that I'm able to be who I am and do a job that I love.

"Being able to be me on air is lush. It's liberating."

Owain has made plenty of waves recently on BBC Breakfast with regular host Naga Munchetty.

In August this year, Naga gave Owain a stark warning to "say something sensible" after a report about e-scooters.

With footage shared of a scooter being ridden on a packed motorway, Naga was left trying to get the conversation back on track as she interjected to the weatherman: "Owain, say something sensible after that."

He quickly replied: "Well what I can say… which is probably good news, is that we're going to see a blue sky."

He asked both presenters: "Does that help?"

BBC Breakfast airs weekdays on BBC One at 6am