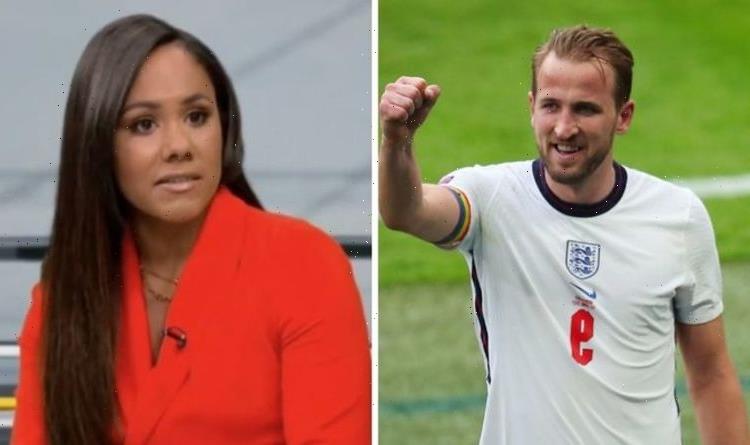 At the weekend, the England men’s national team beat Ukraine 4-0 in the quarter-finals of Euro 2020. Gareth Southgate’s men will now go ahead and play against Denmark in the semi-final on Wednesday. However, according to the BBC’s latest complaints report, some viewers felt the broadcaster’s coverage of The European Football Championship was “biased” and the commentators spent “too much time” talking about England.

The BBC received over 100 complaints about the coverage, and according to the broadcaster’s website [via Metro], it stated the complaints were “from people who think our commentators or presenters are biased in favour of England”.

The BBC released a statement in response to the complaints where they defended its coverage of the Euros.

It began: “This year, our Euro team features a line-up of England, Scotland, and Wales experts.

It continued: “Dedicated team coverage will also be provided by home nations experts; Kelly Somers for England, Eilidh Barbour for Scotland, and Carl Roberts for Wales.

“We are proud of the expertise and experience that our team are bringing to football fans across the UK.

“And don’t agree that our line-up shows any bias towards any one team.”

The BBC was also flooded with complaints from viewers who felt “the Euro team spent too much time talking about the England team”.

The complaints referred to June 29, when England rose to victory against Germany with a score of 2-0.

The broadcaster defended its commentary as it stated it doesn’t “consider it inappropriate for members of our team to spend some time talking about their [England’s] performance”.

Releasing a statement, the BBC said: “During our sport commentary, it is not uncommon for commentators to discuss other teams and/or games in the tournament.”

It continued: “Given that earlier in the day England won their game against Germany, we don’t consider it inappropriate for members of our team to spend some time talking about their performance.

“After reviewing the match, we feel that the time spent talking about the England team was fair and did not take away from our analysis of the Sweden v Ukraine game.”

While the BBC has addressed the complaints made directly, many viewers have been venting similar frustrations via social media.

Referring to the Germany match coverage, one fan tweeted: “@BBC Your commentators for the England v Germany game are so biased in favour of England it is embarrassing. Are they aware that there is non-English people watching who would like an impartial commentary.”

A second added: “So annoying how biased the euro coverage is towards England on both BBC & ITV. Every conversation comes back to England.”

“P****s me off how biased the BBC commentators are for England too blatant,” vented a third.

A fourth concurred: “I don’t think that it’s really possible for Scottish or Welsh supporters to support England. Mainly because of the coverage and commentators from both BBC and ITV are so biased towards England, the pre-game comments from the Scotland England game being the case in point.”

While a fifth brought up Billy Gilmour’s positive Covid result as an example: “@GaryLineker once again Gary and Alan on BBC are biased again when talking about England and Scotland.

“You say a Scotland player testing positive but then jump to two players isolating. No more talk about Scotland. Why I ask and be the bigger man and change your ways.” (sic)

England take on Denmark in the Euro 2020 semi-final on ITV at 7pm.