After a season spent gallivanting across Europe (and stepping aside for a number of standalone episodes), the Atlanta crew is back in their hometown — and it’s just as strange as we remembered.

Thursday’s premiere for the fourth and final season got back to its roots, sending its four main characters off on a series of surreal side quests. Let’s take these one by one, shall we? 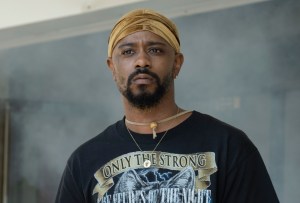 DARIUS | Our favorite space cadet kicks things off by casually strolling through a department store while it’s being looted, with security alarms blaring and customers running out with armfuls of stolen goods. He ambles up to the return counter, trying to return an air fryer, but the cowering employee just points to the chaos surrounding them. (“It is pretty wild in here,” Darius notes. “Kinda looks like a Marshalls.”) The employee starts processing the return — but then he decides to just take all the cash in the register and make a run for it himself. Darius leaves, air fryer still in hand, but he’s stopped by an angry white woman in a motorized scooter who’s chastising all the looters: “I would rather die than let you take that.” Other shoppers spray her with fire extinguishers, allowing Darius to escape, but they soon flee when she emerges from the smoke with a knife drawn… and makes a slow beeline for Darius in her scooter.

Darius catches up with Al, who’s stuck in traffic, and gets into his car, but he can see the knife-wielding woman slowly approaching in his sideview mirror. He nervously tells Al to take the next exit, but the car isn’t moving, so Darius gets out, with the scooter woman taking a vicious swipe at him as he does. He dodges her and runs off, but still, she follows. He bikes to an empty industrial park, still holding the air fryer, but the woman is right behind him. She won’t let up! “I don’t know what Fox News has been feeding you, but I’m not antifa, I’m not a looter,” he yells at her. “I was just returning my air fryer.” Her response? “I don’t care!” He climbs up onto a ledge where she can’t reach him, but she just shrugs: “I’ll wait.” He shimmies through a broken fence and yells back, “Get some help!” as he runs away. 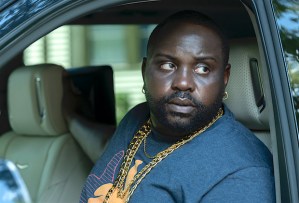 AL | While he’s stuck in traffic, Al hears on the radio that a favorite rapper of his, Blueblood, has just died. He’s headed to the airport, but as Darius points out, there’s almost no point: “You don’t like L.A. You don’t like New York. You don’t like nowhere.” After Darius runs away from the scooter woman, Al gets fed up with the traffic jam and takes a detour, and as he’s pumping gas, he hears a Blueblood song playing. He spots a barbecue place nearby and orders a “zoo pie,” since it’s mentioned in a Blueblood song. The cook puts on a CD while he works — it’s a Blueblood track Al hasn’t heard — and then serves Al his meal in a container with a strange symbol printed on the top. “Hey man, is this a scavenger hunt?” Al asks, but the guy claims he doesn’t even know who Blueblood is.

Al follows the clues all over town, playing a video game and cashing in a long strip of prize tickets, looking inside a broken dryer and finding a pair of 3D glasses to watch a movie with… he eventually ends up at an abandoned strip mall and enters one of the stores, where he finds a lone woman sitting at a funeral service. He asks her if Blueblood is performing, but she says, “No, he’s dead.” She was Blueblood’s wife, and his last wish was to plan this elaborate scavenger hunt that tied into his new album. Al is only the fifth person to show up, though. She’s surprised so few people made it: “I guess you don’t always get back what you give… I just wish he had more fun. Because that’s all there is in the end.” She offers Al a plant as a parting gift: “Track 11 is how to care for it.” (Ha!) Oh, and Al goes up to the coffin to pay his respects… but there’s only a fake skeleton in there. Blueblood was cremated a month ago. 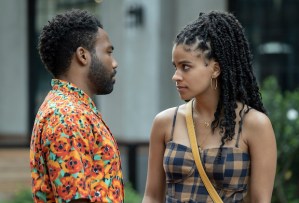 EARN AND VAN | The two exes take a trip together to swanky outdoor mall Atlantic Station, and Earn bumps into another ex of his, Kenya, on their way in. “You can’t go to Atlantic Station and not run into somebody,” Van muses… and she doesn’t know how right she is. At the phone store, another ex of Earn’s walks by and waves, and an ex of Van’s stops and says hi, too. He’s been working at this phone store for the past 10 years, Van marvels. What is this place, the Island of Misfit Exes? Well, yeah, kinda. As they walk through the mall, everyone they pass is a former flame of Earn’s or Van’s. (“She’s wearing a shirt that she stole from my house,” Earn notes about one passerby.)

They’re both understandably freaked out and try to leave, but they can’t find where they parked their car. They run into Kenya again, who doesn’t remember seeing them earlier. She’s lost, too, and doesn’t even know how long she’s been there. What was playing at the movie theater when she arrived, Earn asks? Now You See Me 2, she says: “That’s bad, huh?” (Yeah, it came out in 2016.) Earn finds an emergency exit door, but Van doesn’t want him to leave her stuck there like another one of his exes. “I would never let you become one of them,” Earn tells her, so they go through the emergency exit together, where it’s pitch black and the walls are carpeted — and wet, for some reason? They fumble through the darkness and finally emerge… at the site of Blue Blood’s funeral service, where they find Al. Oh, and Kenya followed them through the door, too.

Al, Earn, Van and Kenya all walk out into the strip mall parking lot, and they’re soon joined by Darius, who looks haunted after his long chase with the scooter woman. He’s still toting around that damn air fryer, and when Kenya realizes she forgot to get a gift for her dad, he hands it to her for free, happy to get rid of it. They all pile into Al’s car, and Van offers Kenya a ride, but she’s happy to just wait for her Uber. The others drive off, leaving Kenya alone in the parking lot holding the air fryer… and we hear the whirr of a motorized scooter creeping up behind her.

Give the Atlanta premiere a grade in our poll, and then hit the comments to share your thoughts on the big homecoming.