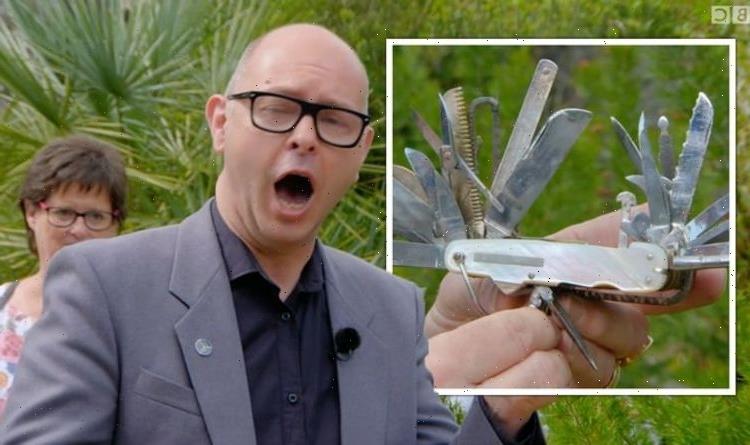 Antiques Roadshow: Marc Allum pricks himself on a pen knife

As Antiques Roadshow arrived at Dyffryn Gardens near Cardiff, expert Marc was thrilled to set eyes on a pen knife with hundreds of utensils. However, are he examined the knife, he accidentally stabbed himself with the item due to how sharp it was. But the guest was more interested in the value of the pen knife and were left “absolutely shocked” with Marc’s estimation.

“So I’m a bit of a Boy Scout, really, and I wouldn’t dream of going out, on any given day without my own multitool, which I literally use on a daily basis,” Marc began.

“But this one knocks mine into an absolute cocked hat, doesn’t it?”

Marc held up both his own pen knife and the one the guest brought in comparing the two.

“It is the most exceptional multitool I’ve seen for a long time,” Marc continued.

“Please tell me where it comes from.”

The guest explained: “All I know if that father obviously acquired it and… but I know nothing at all about the history of it.”

“Is this something you would entertain using, do you think?” the expert asked.

The guest replied: “No, I don’t think… I have a theory that I think it may have been some salesman’s tool, when you went around the local dignitaries asking if they wanted pen knives made, and this would be the options that they could have made into a pen knife.”

“Well, it’s interesting,” Marc continued. “You’re not a million miles off the mark, to be honest with you. because this is not something that’s really made to be used in the sense that my multitool is made to be used.

“This is really a tour de force of the cutler’s art.

“And it’s an exhibition piece, it was primarily made just to show how good a particular company was. This is a 48-blade multitool.

“Now, I say blades because of course there’s a massive kind of variety of different tools on this.

“Everything from scissors to gun cartridge removers to bone saws to a rule. I mean, the sky’s the limit, really.

“Now I studied it very carefully and I did manage to find a maker’s mark on it. And it, in fact, is on this blade just here. It says Dodson, Sheffield. Now, that’s great.

“We know that it’s a Sheffield-made multitool. I reckon this dates from the late-19th Century.

“Now that we know that it’s not really meant to be used, it’s more of a display item, how do you feel about that?”

Marc branded the knife a “wondrous item” with the guest agreeing they really liked it. The expert continued: “The market for these is very, very strong.

“It’s also very strong in America as well where they adore these multitools. I this were to go into auction, I can see this easily making £2,000 to £3,000.”

Marc replied: “Thank you so much for bringing it along,” before screaming in pain. “Sugar! I cut myself! Look!”

Antiques Roadshow airs Sunday on BBC One at 8pm.