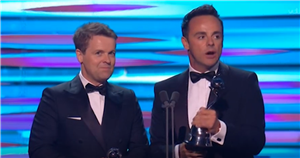 As Ant McPartlin and Declan Donnelly won the National Television Award for Best Presenter, Ant’s nerves got the better of him as he swore live on ITV.

Eagle-eared viewers of the show heard Ant accidentally say “s**t” as he accepted the award for the 20th time in a row alongside his presenting partner.

As cameras panned to the star-studded audience, Ant and Dec's longtime pals Holly Willoughby and Philip Schofield could be seen laughing in the audience.

The celebrity duo don’t miss a beat though, as they quickly brushed off the error and continued to give their thanks for the award.

The pair had been in the running for the accolade against Piers Morgan, Alison Hammond, Bradley Walsh and Holly Willoughby.

Earlier in their speech, Ant had looked back on their first win twenty years ago by saying: "We were talking in the car on the way here and the first year we won an NTA, Tony Blair was the prime minister and Newcastle United qualified for the Champions League. It just goes to show how long ago it was.”

But the pair have shown no signs of slowing down as they recently announced a new game show that they’ll be hosting with a “limitless” jackpot.

Jumping on Instagram to announce the project, they both shared a snap of themselves by a white board that read: “Ant & Dec’s Limitless Win.”

They captioned the snap: "Casual thinking poses… poised to launch a top secret, VERY special something rather soon… Oh wait! We forgot to clean the whiteboard.

"We should probably just tell you now then!! So, SO excited to be bringing you a ground-breaking, brand new TV format, featuring the world’s first ever LIMITLESS jackpot and a money ladder that never… ever… ends!

For the latest Ant & Dec news, sign up to OK!'s daily newsletter.