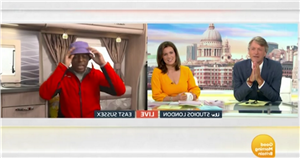 Andi Peters defended his odd choice of outfit on Good Morning Britain as Richard Madeley made a scathing attack on his hat.

The TV presenter showed off a new bucket hat on Tuesday after guest host Richard had criticised his headwear the day before, but was taken aback as Richard told him: "I like the hat, but I don't like it on you."

Competitions presenter Andi was also mocked by weather forecaster Laura Tobin for wearing a see-through plastic skirt over the top of his jeans as he battled the rain, saying that if he got wet it would be "the worst day of his life".

The scenes aired as Richard and his co-host Susanna Reid smoothed things over following a disagreement about wearing masks after 19 July. Richard said: "It's alright, we're still friends aren't we?"

Susanna reassured him: "I never fall out with anyone on this show."

But as they cut to Andi to hear details of the competition, Andi said: "You just said that you never fall out with people but yesterday I was wearing this hat on the programme Richard, you could see I had a nice hat on, bucket hat, they're all the rage.

"But Richard you didn't like that hat. I'm convinced I can win you over so I went shopping yesterday Richard. How about this bucket hat, any better?"

Richard didn't spare his co-star's feelings as he bluntly told him: "Look, Andi it's like this. I like the hat, but I don't like it on you. That's the issue.

Richard said: "Well he did ask, he did challenge me."

"Maybe me and Richard are no longer friends! That's the headline."

But Andi's co-hosts hadn't finished their attacks on his fashion sense, as Laura Tobin picked him up on his wet weather gear which included a plastic skirt tied around his legs to protect him from the pouring rain on Tuesday morning.

Laura said: "What was Andi wearing on the bottom half of his body? Is it like a rain mack or some plastic trousers? I mean Richard didn't like the hat, that is the issue with the outfit right there."

"I've fashioned some plastic. Mark Heyes on Lorraine says this is all the rage, leave me alone."