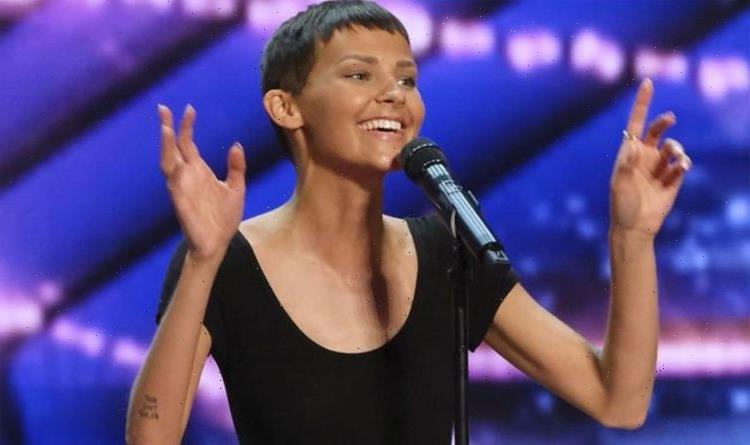 Singing star Jane ‘Nightbirde’ Marczewski has been forced to drop out from competing in NBC’s America’s Got Talent because of her ongoing battle with cancer. Jane became Simon Cowell’s season 16 Golden Buzzer act following her audition earlier this year. However, she’s now revealed the heartbreaking news that she’s having to pull out of the competition.

Jane auditioned for the hit show earlier this year and won the judges over with her performance of her original track, It’s Okay.

Simon gave the singer high praise for her vocal skills at the audition: “Your voice is stunning.”

“There was something about that song after you just almost casually told us what you were going through,” he added.

Jane told Simon: “You can’t wait until life isn’t hard anymore before you decide to be happy.”

After being wowed by her singing Simon hit the Golden Buzzer, sending Jane straight through to the live shows.

She hugged head judge Simon on stage thanking him for choosing her as his Golden Buzzer act.

After walking off stage Jane remarked: “I have a two percent chance of survival, but two percent is not zero percent.

“Two percent is something and I wish people knew how amazing that is,” she added.

However, Jane’s now shared the devastating news that she’ll be dropping out of the competition.

The singer posted a photo of herself sitting in bed with her bald head on display.

Jane captioned the post: “Sharing my heart with the world on AGT has been an honor and a dream come true. My point of view this summer has been astounding.

“What a miracle that the pain I’ve walked through can be reworked into beauty that makes people all over the world open their eyes wider.

“Since my audition, my health has taken a turn for the worse and the fight with cancer is demanding all of my energy and attention.

“I am so sad to announce that I won’t be able to continue forward on this season of AGT. Life doesn’t always give breaks to those that deserve it—but we knew that already.

“Thank you for all your support, it means the world to me. Stay with me, I’ll be better soon. I’m planning my future, not my legacy. Pretty beat up, but I’ve still got dreams,” she concluded.

She explained to judges Simon, Howie Mandell, Sofia Vergara, and Heidi Klum she had been through a tough couple of years.

When they asked what she did for a living, Jane confessed: “I have not been working for quite a few years. I’ve been dealing with cancer.

“Last time I checked I had some cancer in my lungs and my spine and my liver,” she added.

America’s Got Talent airs Tuesdays on NBC in the US, while it is available to stream on Netflix in the UK.