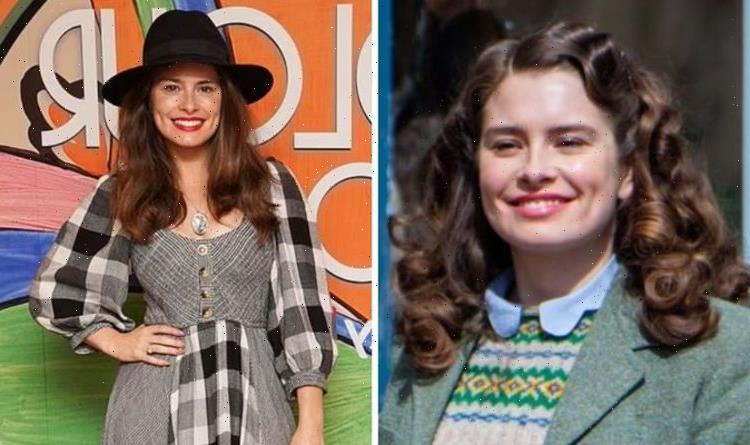 Rachel Shenton has starred as Helen Alderson in the Channel 5 reboot of All Creatures Great and Small for the past two years but will soon take on a new role. The Oscar winning actress will appear in highly-anticipate Sky Cinema project The Colour Room, which tells the story of Clarice Cliff.

Ahead of its release, the All Creatures Great and Small star took to Instagram to share the trailer for the upcoming film.

She captioned the teaser: “Coming soon,” alongside open eye emojis.

Rachel added:  “Posted @withregram @unitedagents Here is the trailer for the upcoming Sky movie, #TheColourRoom! Inspired by the incredible life of Clarice Cliff.

“Starring @phoebedynevor, @rachelshenton, @kerryfoxacts and Conrad Nelson. Coming to Sky and in cinemas the 12th of November.”

Kerry Sirrell said: “Can’t wait to see this!” with clapping hands and a heart emoji beside it.

Madeleine Maple Cooper commented: “I didn’t realise you were in this! Cannot wait to watch it!”

Rocker Billy Kelly added: “I can’t wait to see this! I live in Stoke-On-Trent and remember seeing some film crews up there!”

The Colour Room follows Clarice Cliff (played by Phoebe Dynevor) during her days in the potteries of Stoke-on-Trent in the 1920s before she went on to become one of the most famous Art Deco designers in the world.

Clarice was a young factory worker in the industrial midlands during the 1920s moving from factory to factory putting her family under strain.

However, she gained the attention of quirky factory owner Colley Shorter (Matthew Goode), who was impressed by her endless ideas.

Her hard work and success helped his factory survive the midst of The Great Depression, and Clarice is now recognised as an icon.

Even in today’s society, Clarice’s design features in the permanent collection of the Victoria and Albert Museum in London and the Metropolitan Museum of Art in New York.

The movie is directed by Claire McCarthy, who previously worked on The Luminaries and is written by BAFTA-winning scriptwriter Claire Peate.

But it’s not just The Colour Room fans can see Rachel appear in in the coming months.

The star confirmed she would be back as Helen in All Creatures Great and Small before the end of the year.

The pair were seen sitting on the roof of a barn on Helen’s family farm but the cast were concerned it may collapse.

Nicholas told Express.co.uk: “When I first saw the barn had a slate roof, I wondered if it was going to hold, but thankfully it was fine when we were actually up there.”.

All Creatures Great and Small is available to catch up on My5.
Source: Read Full Article