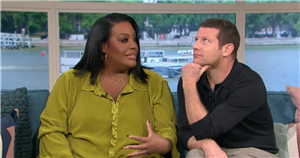 This Morning host Alison Hammond left her co-stars speechless by revealing her bizarre clothes hack during the latest show.

The presenter, 47, fronted Wednesday's episode (October 19) of the ITV programme alongside Dermot O'Leary.

Discussing age and fashion trends during the This Morning style segment, Alison left Dermot and their fellow panellists including Tom Swarbrick and Anushka Asthana speechless by confessing to a bizarre fashion habit in her younger years.

Having joked she "just used to wear what fitted", Alison later revealed she used to use an unusual item as a boob tube.

She said: "I used to buy miniskirts and make them a boob tube.

"I wanted to be part of the trend so I used to do that."

While bursting into laughter, her co-stars including Dermot were left speechless by Alison's surprising fashion confession and also discussed their take on keeping up with fashion trends while ageing.

Of his own fashion habits, Dermot added: "There's a difference between style and fashion.

"So, you get to a certain age and you still want to explore and experiment.

"But, you get to a certain age and if you're still wearing what the 16 year olds are wearing, it might not work out too well for you."

Alison and Dermot are presenting This Morning in Holly Willoughby and Phillip Schofield's stead this week.

While popular with fans, Alison recently lost out on a National Television Award for best presenter to TV veterans Anthony McPartlin and Declan Donnelly.

Earlier this month, the former Big Brother star joked she had "given the pair Covid" after an illness forced them to skip the awards show.

This Morning airs from 10am on weekdays on ITV.