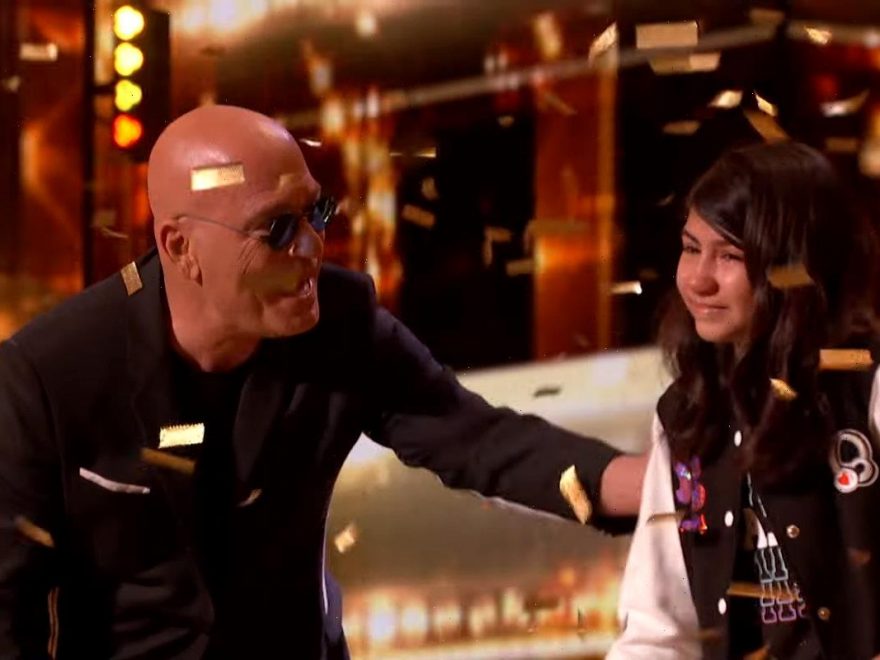 AceShowbiz -“America’s Got Talent” returned with a 1-hour episode on Tuesday, June 7. In the new episode, judge Howie Mandel hit his Golden Buzzer for Madison “Maddie” Taylor Baez, who first posed as an audience member and sang from her seat.

During a commercial break, Maddie raised her hand when the show’s warm-up comic asked if there was anyone in the audience who wanted to try singing. It’s a tradition on the show, apparently, and one that most of the judges essentially ignore. However, there was no ignoring Maddie’s vocal rendition of “Amazing Grace”.

Shortly after, Simon Cowell invited her up to the stage to give a proper audition. “I’ve been to many tapings, and ever since I was 4 years old, I would always try and sing for the commercial breaks,” Maddie shared with the judges, as tears already began to stream down her face, “And it’s always been my dream to be on the show. And I’m finally here.”

Maddie then started singing “Amazing Grace” beautifully which left everyone floored. Of her performance, Simon commented, “I’m not kidding. In all the years we’ve ever done this, this has never actually happened before. I mean, I normally leave during the break because people do sing. So this is actually the opposite. It actually brought me back into the room.”

When asked what she’d do with the prize money, Maddie revealed, “I would help my dad with cancer research. He has stage four colon cancer for the past nine years.” Still wowed, Simon suggested they all just vote to see if she should move on. However, Howie had other plans. “From the audience seat right to the live show. You ready?” Howie asked, before slamming the Golden Buzzer and showering Maddie in shimmering confetti.

“There are no words to describe the feeling of her singing. We see singers all the time, but this was magic. She is magic,” he pointed out. “That was, for me, the most surprising, jaw-dropping moment I have ever personally experienced in my history on ‘AGT’.”

Back to Tuesday’s episode, the first act of the night on the exciting audition round was Zoe Tomas, 11, from Agua Dulce, California. She brought out her chicken Hallow to demonstrate chicken training. Hallow proceeded to jump through hoops, climb up to perch and do an obstacle course on-demand.

“I’ve never seen anything like that,” Howie commented, “I love your chickens. I love you.” Meanwhile, Simon said, “They did everything right,” giving her a yes. All the judges agreed and voted her on.

Up next was a two-person band of another sort, the social media dance duo Funkanometry. Their funk music selection lit the audience up with smiles immediately and Simon commented that he thought they had good personalities. Heidi Klum said that she was “worried at first” because TikTok dancing doesn’t always translate well to the stage, but she, Sofia Vergara and Simon all loved the audition. Howie rounded out the support by saying that their storytelling and choice of music really worked, leading the panel in what would be four yes votes.

Later, Aiko Tanaka, a comedian from Japan, took the stage and performed her stand-up comedy act for her audition. She joked that her name translates into meaning “illegitimate child in the rice field.” She cried when she finished her set as the judges all voted her on.

Also receiving four yes votes was Vivianne Rossi. She’s an aerialist from Spain. Wearing black lingerie, she was dunked into a bathtub and then was hoisted high above the stage for her performance. After doing multiple flips, she spun herself around at high speed propelling herself with the rope around her neck.

“That was sensational,” judge Sofia gushed. “The water made it so dramatic. I feel that this needs to be in a James Bond movie.”

Elsewhere during the episode, Drake Milligan, a 23-year-old country singer from Fort Worth, Texas, earned yeses from all four judges, as well as a comparison from Howie to a musical icon Elvis Presley. “I think that song’s a hit, and I think you’re a hit,” Howie said after Milligan and his band performed his original song “Sounds Like Something I’d Do”. “You’re like the new Elvis of country.”

The final contestants of the night were Metaphysic.ai founders Chris Ume and Tom Graham, a duo who used “artificial intelligence to create hyper-real content.” Instead of singing themselves, they invited past “AGT” contestant Daniel Emmet to sing Chicago‘s “You’re the Inspiration” while a camera filmed him.

The camera projected onto a large screen Daniel’s body, but with Simon’s face plastered onto him in shockingly realistic uncanny effect. “Is it inappropriate to fall in love with a contestant?” Simon joked after Daniel’s performance, “A great singer who looks incredible.” They later earned unanimous yeses from the judges.