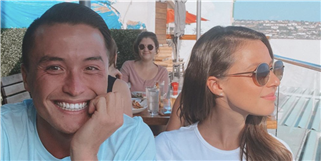 At this point you’ve probably heard the breaking news out of Bachelor Nation: Katie Thurston is dating her former contestant John Hersey, a plot twist that’s left her ex Blake Moynes “blindsided.” (It’s also left him slightly in his feelings because he went ahead and unfollowed her on Instagram.)

So…how did John and Katie get together? First of all, they’ve been hanging in San Diego for a while, and Katie even described him on Instagram as her “dear, dear friend” back in early September (a little over a month before Katie and Blake split in October).

But according to a source who spoke to Page Six, Katie thinks John “is much more of her type than Blake,” and “she finally came to realize that John is a better fit than anyone else she met on the show.”

The source added that Katie “told producers at the beginning of her season that John caught her eye and she regrets that she got distracted by the other men along the way. But she’s hopeful they can start a new chapter off-camera.”

Katie sent John home in Week 2 and obviously ended up engaged to Blake, but the source says she’s now
https://www.instagram.com/p/CWoAnuel4s-[/instagram]

Wishing these two all the best!