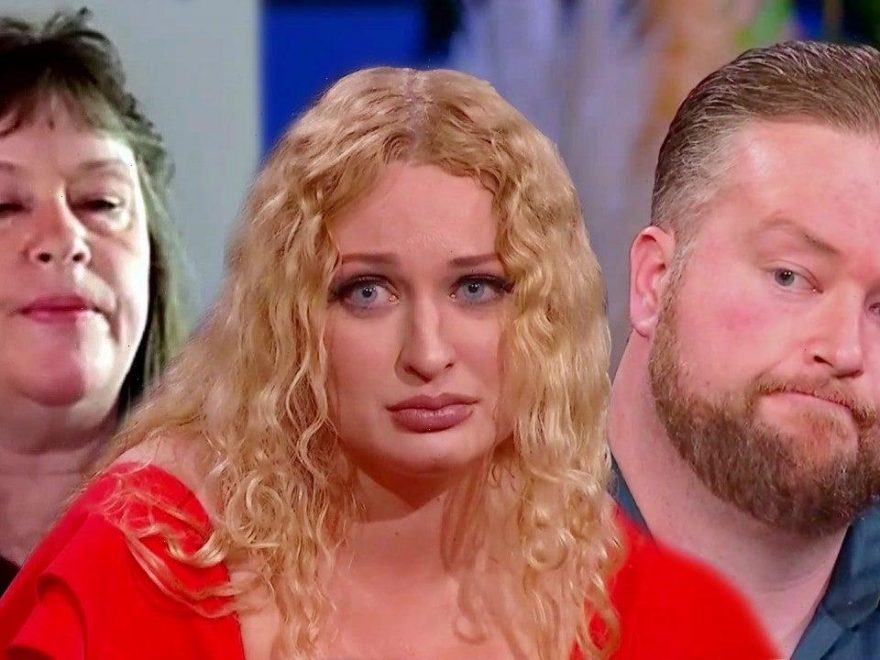 Mike has got some serious explaining to do when it comes to initially calling off his wedding to his now-wife, Natalie. On part one of this season’s 90 Day Fiancé tell-all, which aired on Sunday, Mike’s mom, Trish, made a virtual appearance and revealed a few things that had Natalie — as well as fellow 90 Day Fiancé castmembers — upset.

Right at the start of the tell-all, Mike was confronted with his decision to abruptly call off his wedding to Natalie just two hours before the ceremony and just three days before her green card was set to expire. Natalie was still clearly upset over the traumatic incident, and cried as they watched back footage. As for Mike, he said he felt like a “piece of sh*t,” and apologized. He said that he had gone into his own head the day of the wedding and overthought things, and that he just couldn’t marry Natalie on that particular day. However, during Trish’s appearance, she said that Mike had actually called her days before the wedding and said that he wanted to call things off and was going to buy a ticket for Natalie to return to Ukraine so that he wouldn’t just be leaving her “high and dry.”

Natalie was stunned by the admission and asked Mike, “You want to send me home?” But Mike said his mom’s timeline was wrong and that they had that conversation after he called off the wedding, but before he and Natalie reunited and he changed his mind about marrying her. Still, Trish insisted that he did in fact talk about calling off the wedding days before, even though the night before the wedding was supposed to take place, viewers recalled that Mike showed no signs of unhappiness and appeared all for marrying Natalie — which made his decision to call off the wedding even more devastating.

Mike’s neighbor, Tamara, also made a virtual appearance and dropped another bombshell — that Trish wanted her to actually object to the wedding ceremony when asked by the officiant, though Tamara refused. Trish didn’t deny her request and said she still wasn’t thrilled with her son’s marriage when asked if she still wishes they hadn’t gotten married.

“I think it is pretty sketchy,” Trish said. “Um… I think that when she comes here and she wants to change everything about him and change his lifestyle and change who he is and what he does and everything else, I’m not really thrilled with that.”

“Because he’s an adult and he can make his own decision,” Rebecca told her. “You’re his mother. If she had done what you asked, you would be stopping the wedding — and that’s not your place.

“I have three grown children. I have a son. I would never do that,” she continued when Trish asked her what she would do in her situation. “I would never try to object to his wedding. He’s a grown a** man.”

Fellow 90 Day Fiancé cast members were clearly team Natalie, with Tarik noting, “And they love each other, no matter how much s**t They go through. Obviously, they’re sitting here together and now holding hands through all of it.”

Mike agreed with Tarik, commenting “Exactly. We made our decision.”

Still, it was clear that Mike and Natalie were not on the best of terms. The two arrived separated to the tell-all but refused to explain why. Natalie was also not wearing her wedding ring, which she claimed was because she didn’t want to get it stolen, which host Shaun Robinson didn’t buy. When asked how they would rate their relationship, Natalie said it was at a 6, while Mike rated it a 7.

In this moment, we're all Rebecca😲 #90DayFiancepic.twitter.com/OWkweIWaTD

The two are set to continue their journey on season 6 of 90 Day Fiancé: Happily Ever After?, which premieres on April 25 at 8 p.m. ET/PT on TLC and will also be available for streaming on Discovery+. Watch the video below for a preview of the upcoming season.

'90 Day Fiance: Happily Ever After?:' First Look at an Explosive Season 6

'90 Day Fiance: Happily Ever After?:' First Look at an Explosive Season 6