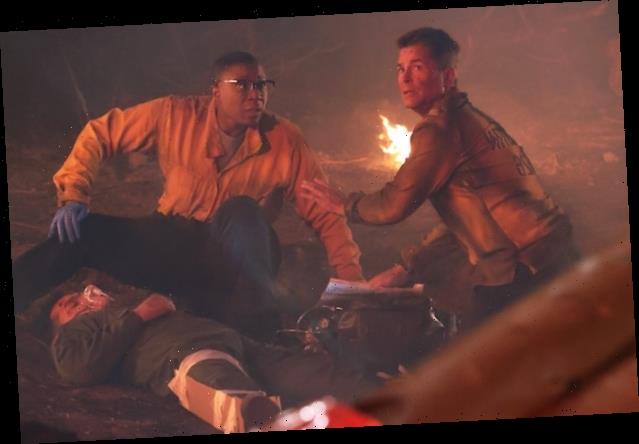 “I was happy to be in the cave with Rob Lowe,” Fox star tells TheWrap 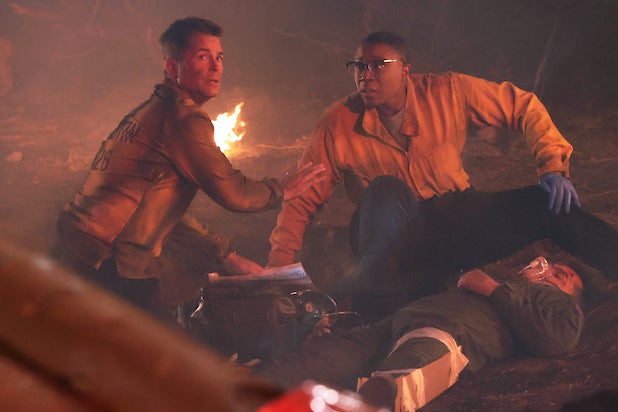 Henrietta “Hen” Wilson (Aisha Hinds) has gone through some pretty dark experiences on “9-1-1.” But one of the paramedic’s most horrifying moments came when she and a couple other members of the 118 headed over to “9-1-1: Lone Star” for Monday’s epic crossover event of the Ryan Murphy-produced Fox dramas.

During the hour, Hen gets way more than she bargained for by joining Buck (Oliver Stark) and Eddie (Ryan Guzman) on their mission to help other companies fight a massive wildfire in Texas. That disaster leads to yet another disaster when Hen and Captain Owen Strand (Rob Lowe) of Austin’s 126 get stuck in a mineshaft after their rescue chopper crashes over the wildfire.

They use their time spent almost dying (almost, because their 118 and 126 teammates do come to rescue them in the end) talking about how Owen recently lost a member of his team in a freak accident in the field, and how Hen once killed a girl with an ambulance because she wasn’t paying full attention.

“I’ve loved the trajectory of Hen’s character, from the beginning until now, and just that in spite of the many experiences that she’s had to traverse and travail through, she still somehow finds a way to anchor herself in some level of perspective and strength to power through and keep a level mind,” Hinds told TheWrap. “And it’s certainly not all due to herself. She does have an incredible support system in her partner Karen (Tracie Thoms) and a wonderful sounding board in Athena, played by Angela Bassett, in which there have been a number of scenes where she has leaned in for wise counsel from either Angela’s character, or Chimney (Kenneth Choi) or Bobby (Peter Krause). So it’s like she’s gathered up a treasure chest of insight and wisdom to govern her life by.”

Hinds said it’s “beautiful,” then, that by the time we’ve arrived at the currently airing Season 4 of “9-1-1,” Hen is the one who is able to share her hard-earned wisdom with other characters — especially one on “9-1-1’s” spinoff.

“When we’re looking for the person who could bring those tools to the table when you’re in the situation that calls for it, and here she was partnered with Captain Strand, and there are those tools being necessary. That quick thinking, but still calming nature that she has that makes you feel like, though you’re facing death in the face, there might just be a light at the end of the tunnel,” the actress said. “And in this case, thankfully, there were a couple of lights at the end of the tunnel coming from their combined teams who fought their way through to rescue them.”

She added: “I thought it was a beautiful pairing with Rob Lowe’s character and my own. I’m grateful to be the one selected to anchor him in that space and to bring my own experience, as Hen, having gone through something that felt incredibly traumatic for the character — having the experience with the young girl and the ambulance and going through therapy and just bringing all the tools she gathered in that space to the table here. And letting him know, ‘Hey, you’re not alone.’ The two of them together provide a mirror for society and anyone who has served in that capacity in real life and letting them know, you’re not alone, and it’s OK to be traumatized and have these things live with you for a while after. It’s very human and there are others that are like you. But don’t let that subtract from the great work you have done and will do going forward.”

“That’s a lot to say, I was happy to be in the cave with Rob Lowe,” Hinds joked.

After tonight’s crossover, we’re sure fans are hoping for more, and “9-1-1” and “Lone Star” showrunner Tim Minear told TheWrap he would love to do a big two-hour event some day. If that does happen, who would Hinds like to see come over to meet the other “9-1-1” characters in Los Angeles?

“For sure I’m all about girl power, so I want Gina Torres (who plays Tommy Vega) over there, I want Natacha Karam (Marjan Marwani) over there, I want Grace (played by Sierra McClain) over in the 9-1-1 center,” Hinds said. “I want all the girls in the building because they are some of my favorite people to watch. But any one of them we’d be happy to have. Just like they welcomed us over, we’re excited at the possibility of another crossover and having the 126 join us.”