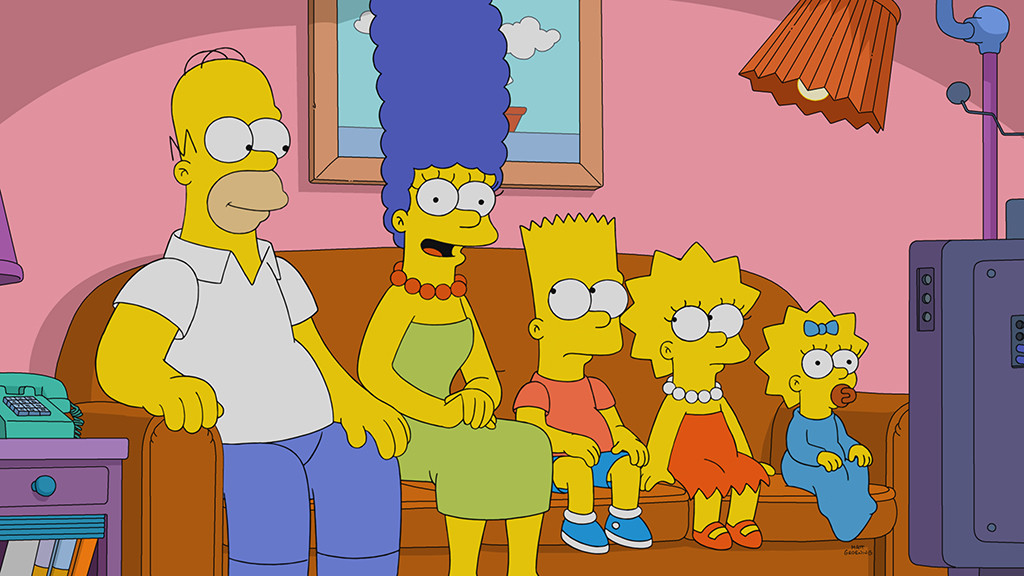 We could go on, but by now, you probably get the point and know exactly what show we’re quoting. And if you didn’t immediately recognize them as coming from The Simpsons, we have to wonder whether or not you’ve been in a coma for the last 30 years.

No, that number isn’t a typo. It’s been three whole decades since Fox’s first family made their debut, becoming the fledgling network’s first series to ever finish a season rated among the top 30. And since then, Matt Groening‘s creation has aired 672 episodes (and counting), becoming the longest-running American sitcom and the longest-running American scripted primetime television series, both in terms of seasons and number of episodes.

Along the way, it’s become a cultural phenomenon, earning 34 Primetime Emmy Awards and a Peabody while spawning a hit feature film, several video games, a theme park ride at Universal Studios, and an unending debate over which season marked the beginning of the decline in quality that any show entering into its third decade would naturally experience.

In honor of 30 years of Homer, Marge, Bart, Lisa and Maggie—not to mention the countless denizens of Springfield we’ve met and fallen in love with along the way—we thought we’d take a look at 30 of the most fascinating facts to come out of the historic production. Enjoy! 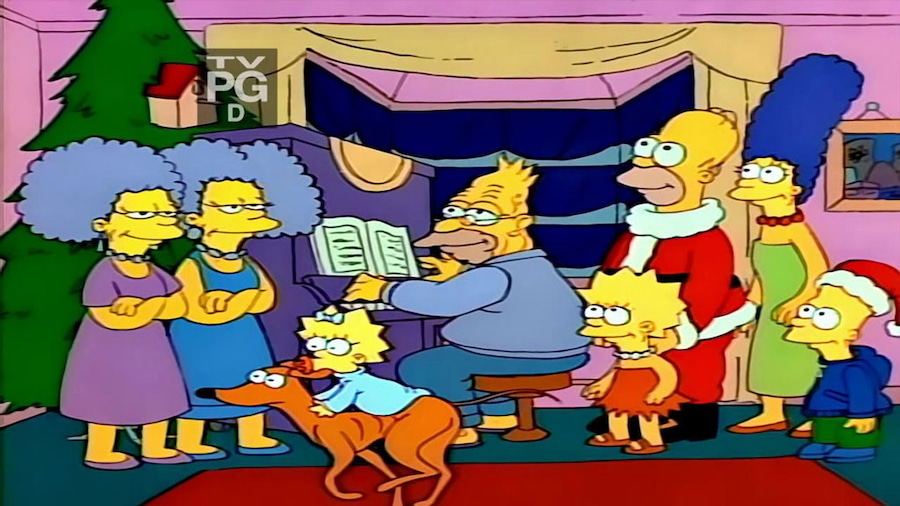 1. The Simpson family first appeared as a series of shorts in The Tracey Ullman Show in 1987 after creator Matt Groening passed on an initial offer to turn his Life in Hell comic strips into animated shorts. According to the creator, he hurriedly sketched the family while waiting in the lobby for his pitch meeting.

2. Groening named all the characters after his own family members, substituting Bart for his own name. Why Bart? It was an anagram of the word brat.

3. They soon became the most popular thing about Ullman and producer James L. Brooks, who’d recruited Groening, realized they should be their own series, ultimately negotiating a provision in the contract with Fox that prevented them from ever interfering with the show’s content. 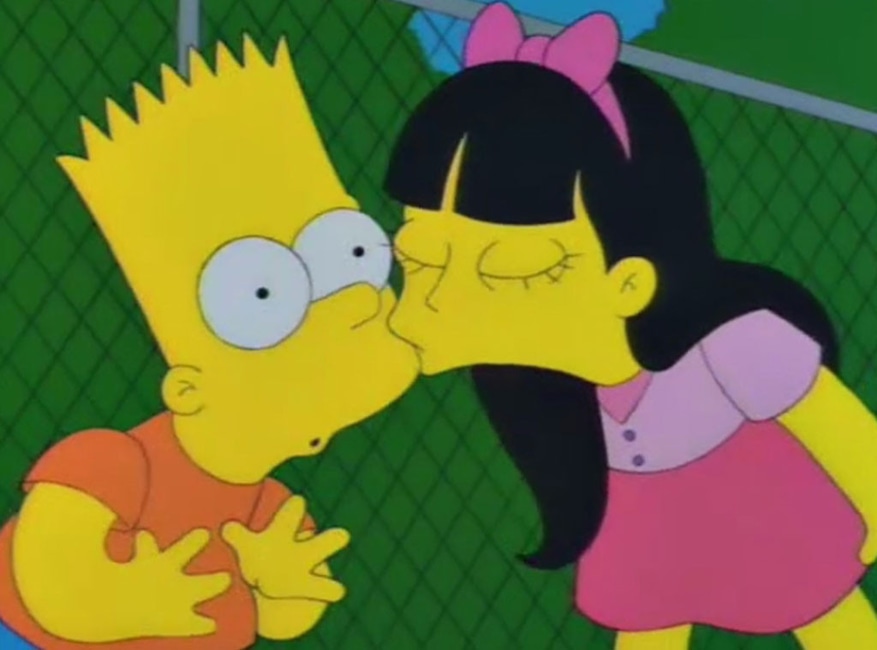 4. The family is yellow because Groening wanted something that would grab people’s attention as they flipped through the channels. He told the BBC that “an animator came up with the…yellow and as soon as she showed it to me I said: ‘This is the answer!’ When you’re flicking through channels with your remote control, and a flash of yellow goes by, you’ll know you’re watching The Simpsons.”

5. The first full-length episode produced, “Some Enchanted Evening,” did not broadcast until May 1990, as the first season’s last episode, because of animation problems that delayed the show’s launch from fall until December 17.

6. Groening drew each of the Simpson family members to be instantly recognizable in silhouette, leading to their distinctive hairstyles and head-shapes. 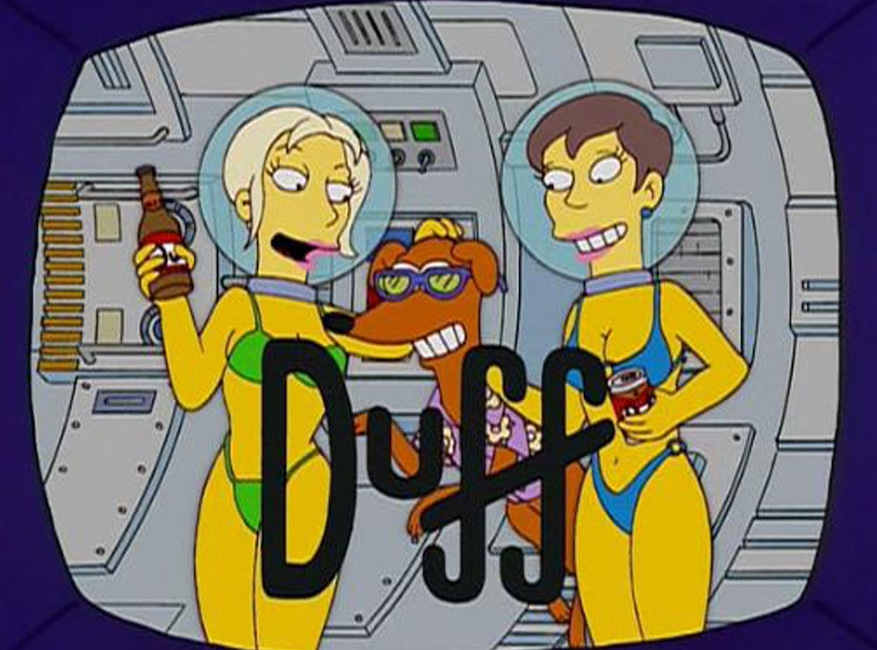 7. Oingo Boingo frontman and composer Danny Elfman was approached by Groening to create a “retro-style” theme for the opening sequence. The iconic piece of music, believed to be the most popular in Elfman’s career, took him only two days to create.

8. The show’s lengthy opening sequence was developed to cut down on animation necessary for each episode, however three elements change from episode to episode: Bart’s chalkboard message, the music played during Lisa’s sax solo, and the closing couch gag, the length of which varies based on the needs of that particular episode.

9. Groening chose Springfield as the show’s setting because of how common a city name it is in America, appearing in at least 29 states. Despite revealing to Smithsonian Magazine in 2012 that it was named after Springfield, Oregon, near his hometown of Portland, he’s intentionally kept the fictional town’s state obscure. “In anticipation of the success of the show, I thought, ‘This will be cool; everyone will think it’s their Springfield,'” he told the magazine. “And they do.” 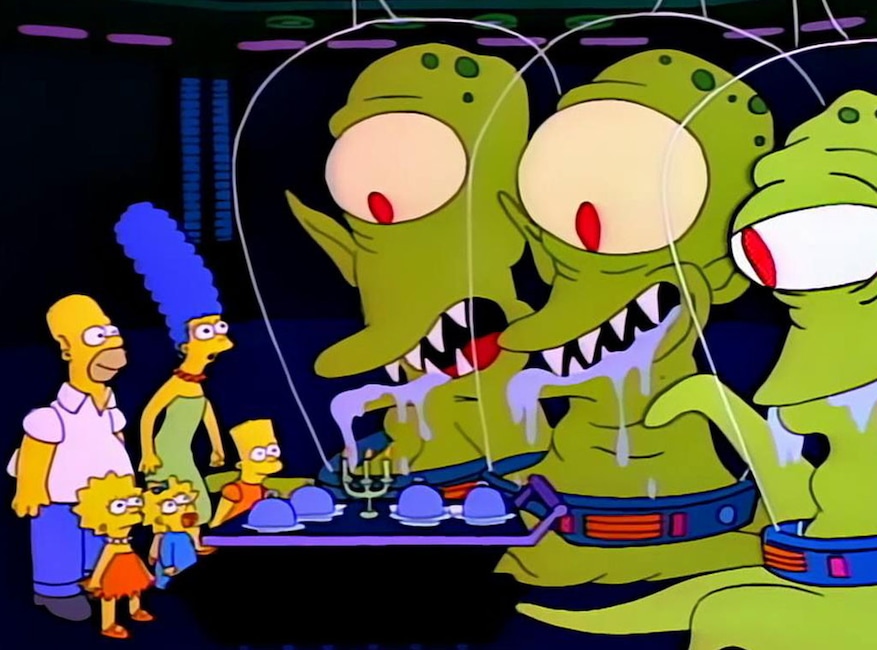 10. The Bush family were not fans of the show. In October 1990, then-First Lady Barbara Bush called the show “the dumbest thing [she] had ever seen,” prompting the show’s writers to pen a response from Marge Simpson, who argued the family was trying their hardest. The First Lady then apologized. In early 1992, then-President George H.W. Bush said, during a speech for his failed re-election campaign, “We are going to keep on trying to strengthen the American family, to make American families a lot more like the Waltons and a lot less like the Simpsons.” The writers responded in the show’s very next broadcast, a rerun, with an opening showing the family watching the speech as Bart replies, “Hey, we’re just like the Waltons. We’re praying for an end to the Depression, too.”

11. While the show has been a mainstay on Sunday evenings for much of its run, its initial success there, becoming the first Fox series to rank among the season’s top 30 highest-rated shows in its first season, prompted the network to move it to Thursdays, airing opposite The Cosby Show, then the number one show. It would remain there until season six when it was moved back to Sundays.

12. Yeardly Smith, the voice of Lisa, is the only main cast member who regularly voices only on character. 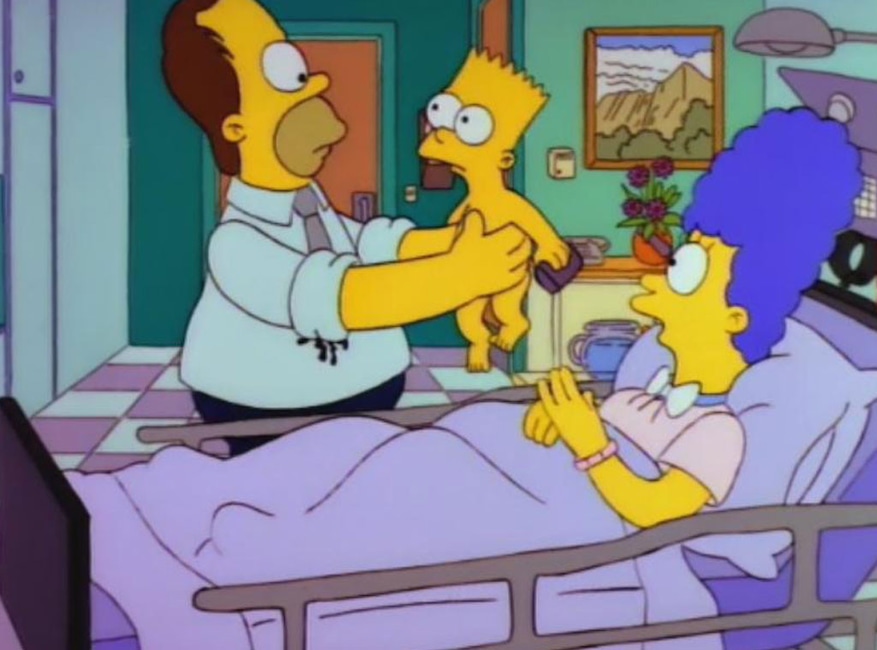 13. Until the 17th episode of the second season, Fox and the production crew kept which characters the voice actors performed a secret, going so far as to close recording sessions while refusing to publish photo of the recording artists. With “Old Money,” however, the network revealed which roles each actor played because the producers decided their cast should receive credit for their work.

14. Until 1998, the six main actors were only paid $30,000 per episode. After a pay dispute, in which the network threatened to replace them with new actors until Groening stepped in to support his cast, they were bumped to $125,000 an episode. After a month-long strike in April 2004, in which the cast stopped showing up to cast readings in the hopes of getting a bigger piece of the show’s rising revenue, their salaries were increased to somewhere between $250,000 and $360,000.

15. In 2011, the show was almost canceled by Fox unless production costs were cut, forcing the cast to accept a 30 percent pay cut from their then-$400,000 per episode, reached through contract negotiations in 2008, resulting in their current pay of just over $300,000 per episode. 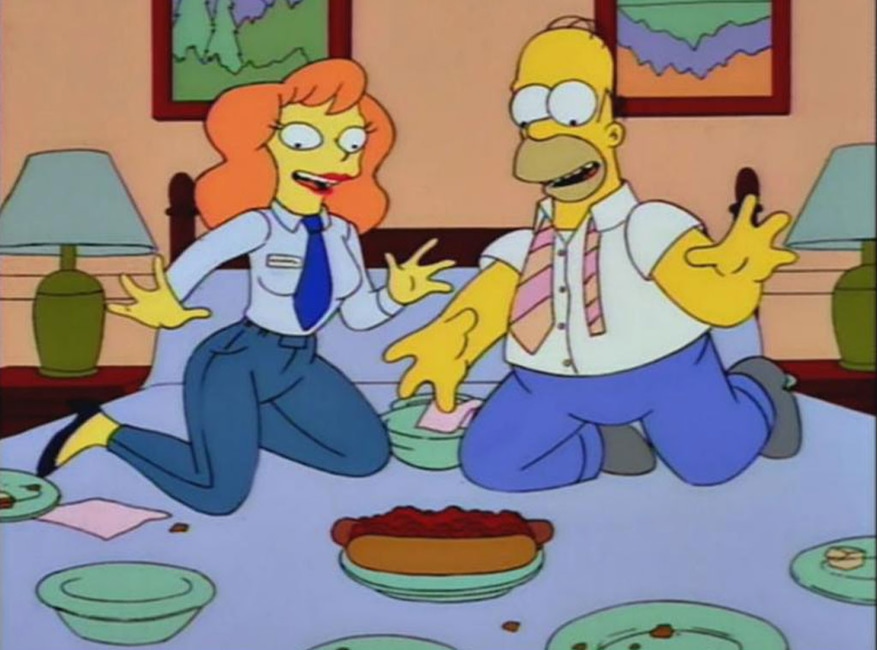 16. The “voice” behind Maggie’s pacifier-sucking is none other than Groening himself. When the eternal-toddler spoke her actual first word (“Daddy!”) in 1992, the show turned to Elizabeth Taylor.

17. When the album The Simpsons Sing the Blues was released in 1990, lead single “Do the Bartman” was widely believed to have been composed by fan of the show, Michael Jackson. Brooks claimed that it was actually written by Jackson’s friend, Bryan Loren, who remains the sole credited songwriter, but in 1998, Groening admitted it was actually co-written and co-produced by the King of Pop, who could not receive credit for it because of contractual issues. When Jackson later guest-starred in a season here episode, he was credited under pseudonym John Jay Smith and his character’s singing voice was performed by a soundalike, Kipp Lennon.

18. Jackson wasn’t the only famous guest-star to perform under a pseudonym. In the second season, Dustin Hoffman played Lisa’s substitute teacher Mr. Bergstrom. Unsure he wanted to be tied to a cartoon, he chose the same Sam Etic for his credit, a play on the word semitic. 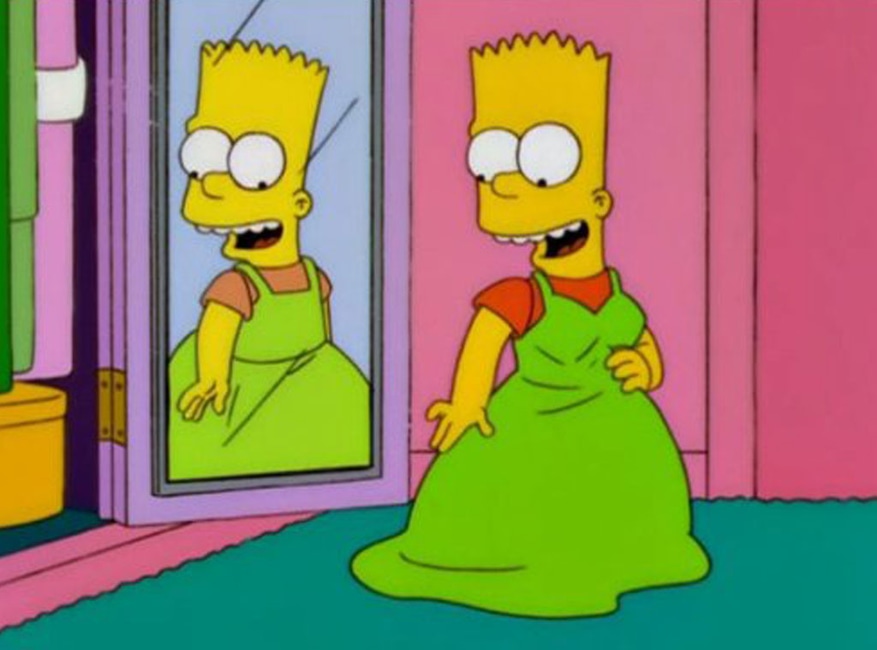 19. The reason Krusty the Clown and Homer look so similar? “The satirical conceit that I was going for at the time was that ‘The Simpsons’ was about a kid who had no respect for his father but worshiped a clown who looked exactly like his father,” Groening explain. Early plans for Homer to be revealed to be moonlighting as the clown were considered to be too complicated for the show and scrapped.

20. A 2003 episode revealed Homer’s email address to be [email protected] The episode’s writer, Matt Selman, registered the address beforehand and within minute of the show airing, the inbox had hit its message limit.

21. While Homer’s “D’oh!” has been added to the Oxford English Dictionary, the expression appears in scripts simply as “annoyed grunt.” Dan Castellaneta, the actor who’s played him for three decades, says he’s based the sound off of Jimmy Finlayson’s “Doooooh!” in the Laurel and Hardy films. 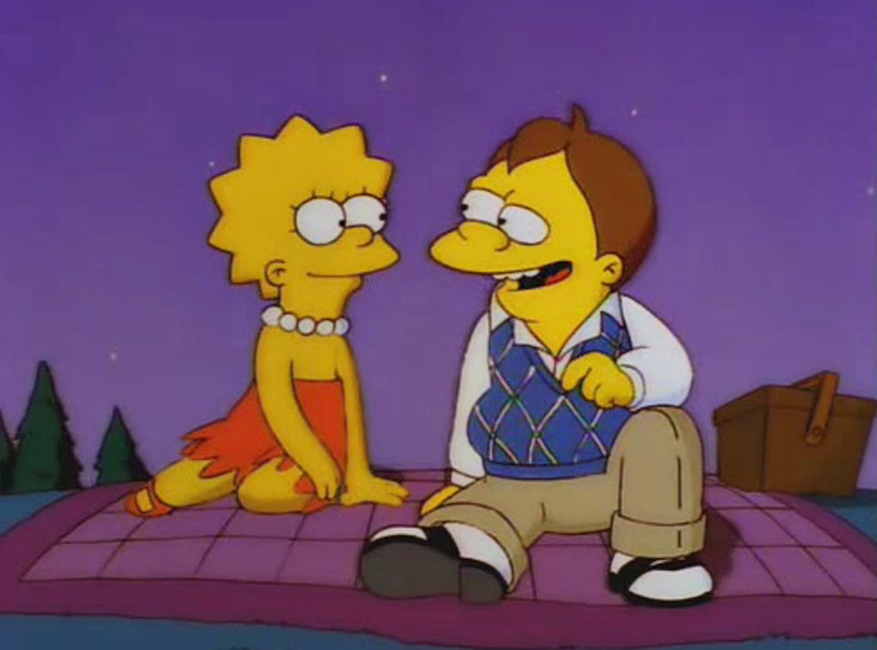 22. While nearly everyone in The Simpsons is drawn with only four fingers, only one character gets an extra fifth digit: God.

23. The show has something of a knack for predicting the future. In the year 2000, the episode “Bart to the Future” mentioned Donald Trump had been President of the United States at one time and left the nation broke. In 1998’s “When You Dish Upon a Star,” 20th Century Fox was revealed to be a division of The Walt Disney Company, which famously happened 19 years later.

24. In 1992, Ullman sued Fox, claiming her show was the source of The Simpsons‘ success and she should share in the profits. The claim was ultimately thrown out of court. 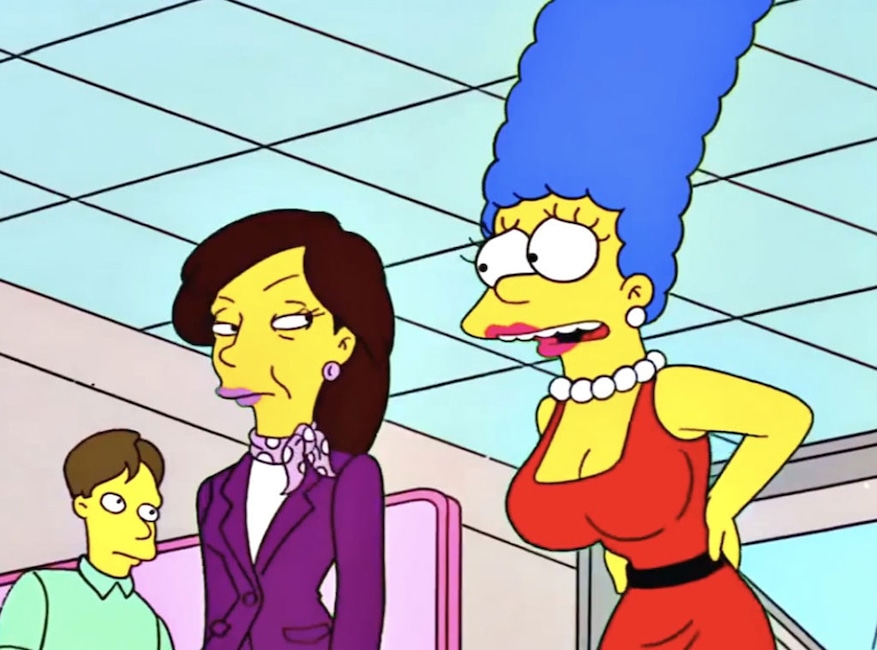 25. In 1997, a life-size replica of the Simpsons’ house was built in Henderson, Nevada for a contest sponsored by Fox and Pepsi. After decorators painstakingly recreated the 2,200 sq/foot, four-bedroom home, the winner, a retired factory-worker from Kentucky, opted for a $75,000 cash prize over the home (which cost $120,000 to build) and it was sold in 2001 after it was stripped of its unique coloring.

26. The show has been dubbed into Japanese, German, Spanish, Portuguese, both standard French and Quebec French, and Arabic. For the latter, because of Islamic customs, Homer drinks soda instead of beer and eats Egyptian beef sausages instead of hot dogs. His name in the Arabic version is Omar Shamshoom.

27. The actors behind the French dubs of Homer and Marge, Phillipe Peythieu and Veronique Augereau, met during auditions and got married a decade later. 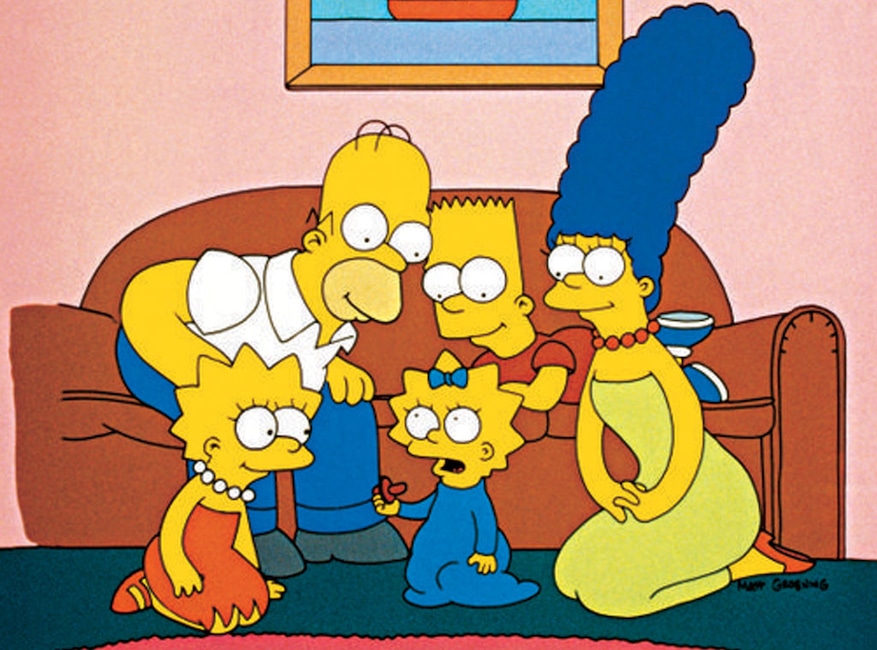 28. Homer is the only character who has dialogue in every single episode.

29. In 1999, Time included Bart in the Time 100, their list of the century’s 100 most influential people. He was the only fictional character on the list.

30. If you were to watch every episode of the series broadcast over the last 30 years, it would take you over 14 full days.