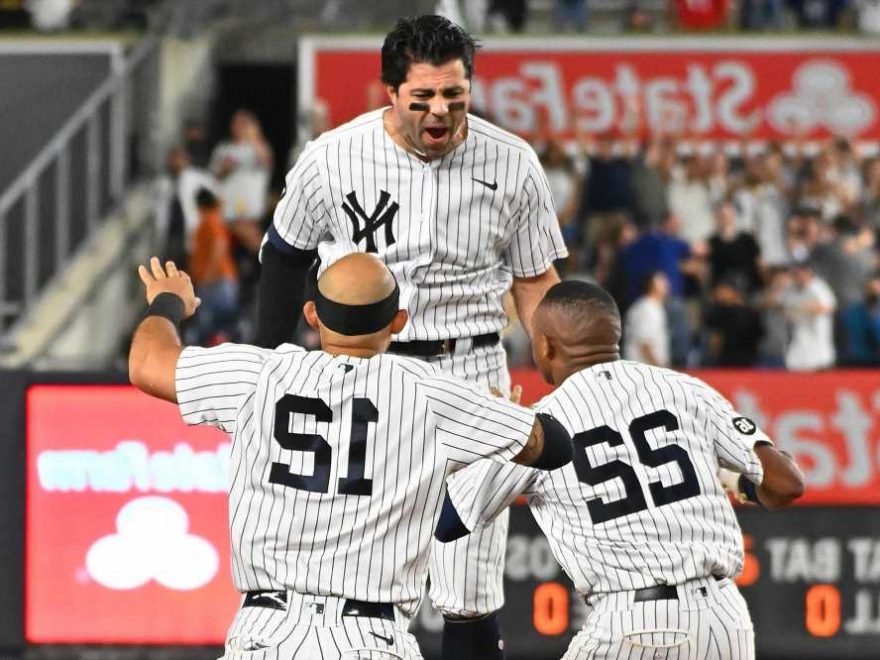 The Yankees got the Red Sox-garbed monkey off their back last weekend, but still only made up one game in the AL East.

Now they have another golden chance to put a dent in the division lead this weekend in Boston — and picked up some extra wind in their sails before leaving The Bronx on Wednesday night.

The shorthanded Yankees coughed up a late lead but still found a way to win a fourth straight game, beating the Phillies, 6-5, on a walk-off single from Ryan LaMarre in the 10th inning.

With Gary Sanchez starting the bottom of the 10th on second base, Gleyber Torres moved him to third on a sacrifice bunt. LaMarre then pinch-hit for Brett Gardner against left-hander Ranger Suarez, with the Phillies switching to a five-man infield.

It was of little use, though, as LaMarre’s fly ball landed on the warning track in right field to score Sanchez and set off a wild celebration in the infield.

The Yankees (50-44) kept pace with the Red Sox and left for Boston trailing by seven games in the AL East.

The Phillies (47-47) tried to gift the game to the Yankees in the bottom of the ninth. With DJ LeMahieu at first, Giancarlo Stanton drilled a fly ball to right field that should have been caught by Brad Miller. But Miller came in too shallow, leaped and had the ball go over his glove to put runners on second and third with one out.

But Ranger Suarez escaped the damage, getting Rougned Odor to hit a grounder to first with the Phillies easily nabbing LeMahieu at home before Sanchez popped up to end the inning.

After the Yankees had used six pitchers to get through nine innings — with Chad Green, Lucas Luetge and Luis Cessa seemingly unavailable — the Yankees turned to Brooks Kriske for the 10th. He delivered a perfect frame, stranding the ghost runner at third.

Zack Britton, pitching back-to-back games for the first time this season, entered in the eighth inning to protect a 5-2 lead. He got in trouble after the leadoff man reached on a Torres fielding error. Britton then issued a pair of walks around an out to load the bases before Boone called on Nick Nelson from the bullpen.

It was not clear why Green never warmed up — he had thrown on Sunday and Tuesday — but Nelson struggled and let the lead slip away. He gave up a two-run single to Luke Williams, issued a walk to reload the bases and then let the tying run in on a wild pitch. Nelson finally escaped, leaving the bases loaded with the game tied 5-5.

Aroldis Chapman, who recorded his first save in a month on Tuesday, pitched a scoreless ninth inning. He walked Rhys Hoskins to lead off the inning but later picked him off for the second out. A trainer and manager Aaron Boone then visited Chapman on the mound for what appeared to be another issue with his fingernail, but he stayed in to strike out Miller to end the inning.

The Yankees had broken a 2-2 tie in the seventh when Estevan Florial singled, stole second and scored on Stanton’s RBI single. Then Odor padded the lead with a towering two-run homer off Hector Neris to put the Yankees ahead 5-2.

The last time the Yankees went to Boston they were also flying high, having cut the division lead down to four games as winners of seven of nine — only to get swept for the second time this season by the Sox. They’ll return playing a new brand of baseball by necessity, with an injection of speed and youth from Triple-A due to their COVID-19 outbreak.

“Obviously it’s no secret who our biggest rivals are and where we’re at in the standings,” Gardner said. “Not just Boston but obviously after that we go to Tampa for three games. We have a very, very important week and a half of baseball coming up this next road trip.”