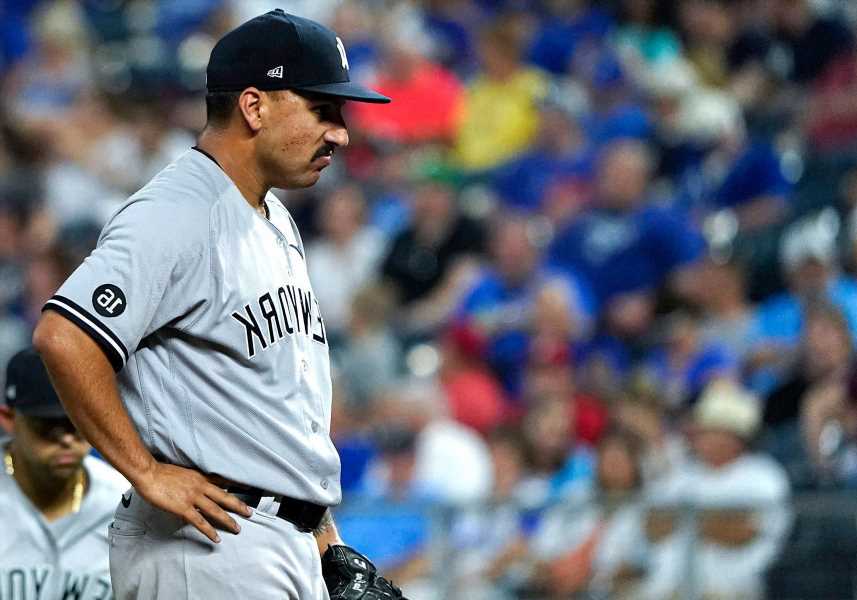 As ever, Yankees' myriad challenges won't draw pity outside Bronx

If you’d like the R-rated, NSFW (and drop-dead hilarious) description that Ichiro Suzuki gave for just how hot it is in Kansas City, Mo., in the summer, that’s easily available on YouTube.

There was also a long-ago August night when the great Buck O’Neil was sitting in his regular seat behind home plate at Kauffman Stadium.

For one of the few times ever, when he was at a baseball stadium, Buck wasn’t smiling.

“Too hot to smile,” he said, and then of course he smiled.

There were few things to smile about Tuesday night in Kansas City, unless you were either:

“I don’t know why it happens,” Yankees manager Aaron Boone said, looking like he’d gotten a bad batch of burnt ends from Arthur Bryant’s Barbeque earlier in the day. “Back-to-back long nights? For whatever reason we didn’t play our best tonight.”

Look, it happens, even for a team that has played as well for an extended stretch as the Yankees have since the Fourth of July. There are easy excuses — a second straight game in 90-degree K.C. humidity (add a dozen degrees if you want to know what it really feels like), coming off a nearly five-hour, 11-inning marathon win Monday.

And as the Scooter used to put it: “Sometimes you’re just due.”

It’s nights like these when we are reminded of just how fragile the daily and nightly tightrope the Yankees walk really is. Winning eight out of nine series — with a chance to make it 9-for-10 Wednesday afternoon — has made it certain that there are genuine stakes now every time they take the field, no matter who they take the field against.

And when you are a team with gaping holes in your batting order — and not knowing yet, day to day, who the next day’s starting pitcher is going to be — it’s actually remarkable that there aren’t more of these games now, especially because the news generally comes in loud bursts from the out-of-town scoreboard.

There is the good news/bad news series taking place in Fenway Park this week, the Rays coming from behind Tuesday (bad news in the division) to knock off the Red Sox (good news for the wild card). There are the A’s, who seem to win every day now, finishing off a comeback of their own in extra innings in Cleveland.

The Blue Jays are making these days even longer now, playing out west.

So a clunker like this, while understandable on certain levels, also brings its share of caution. Joey Gallo continues to scuffle as a Yankee (7-for-45, 22 strikeouts). The daily grind of replacing Gary Sanchez seems to be gaining on Kyle Higashioka, who hit a homer that briefly gave the Yankees a lead, but also added two uncharacteristic throwing errors to the Yankees’ pile.

Aaron Judge and Giancarlo Stanton each have two home runs since the All-Star break. Logic and past performance insist that will self-correct. But when?

“It’s pretty infuriating,” Higashioka said, speaking of his own adventurous evening, but seeming to summarize the feelings of most of the solemn faces that walked off the Kauffman Stadium field Tuesday night. “It’s not acceptable.”

When the margin of error is so thin, when there are but 49 games left on the schedule, it can surely seem that way, whether it’s the heat or just the long year. Of course, this is exactly what you want, for all of these games to matter this much. It’s why losing them can feel so infuriating.