THE BEAUTIFUL Eva Marie is officially BACK in WWE and ready to kick-off a new EvaLution in the women’s division.

The American, real name Natalie Coyle, has been linked with a comeback to Vince McMahon’s company for months. 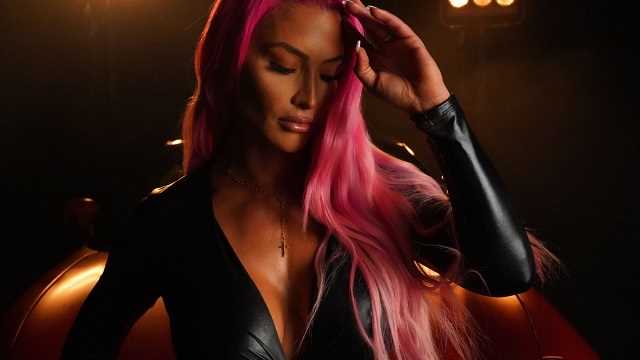 SunSport reported in October how the 36-year-old was poised to return after leaving in 2017 to pursue other interests.

It was claimed that she could be involved in the 2020 WWE draft, though this ultimately failed to materialise.

However, she now appears to be officially assigned to Monday Night Raw’s roster after her appearance three days ago.

Marie appeared in a video vignette during Raw dressed in a sexy leather outfit to declare that ‘The Eva-lution’ is coming.

“Good. You know, on the road of life there are twists and turns, and I’ve always tried to be the one in control of my own life, and the independence that comes with it, but part of that is giving back.

“Now I have your attention. I want to be someone others look up to, I want to influence others to go after their own ambitions like I did.

“So, I’m back where my journey started. This is Eva-lution.”

Eva tweeted following the vignette: “Do I have your attention? @wwe #EvaLution #WWERAW.”

Marie has enjoyed a successful career away from the ring due to her modelling exploits and on the TV screen.

It was announced in February she will star in the new Amazon Prime series Paradise City.

The drama hit TV in March, with her appearing alongside Bella Thorne, Andy Biersack, Sopranos star Drea de Matteo, and Cameron Boyce in his final role in the show.

It remains to be seen whether Marie will be returning to wrestle or to be an on-air personality.

Marie revealed in August that she would welcome back a move to WWE in an interview with Reel Talker's Jim Alexander.

She said: “WWE is always my number one. My family. They are everything.

“Vince, Hunter (Triple H), Stephanie, they took a chance on me, as a nobody at all. They gave me opportunities to possibly become a superstar.

“I am just so thankful to that company and feel I have some unfinished business (if you know what I'm saying).

“I have no problem and see myself coming back to WWE. Stirring it up a little bit.”