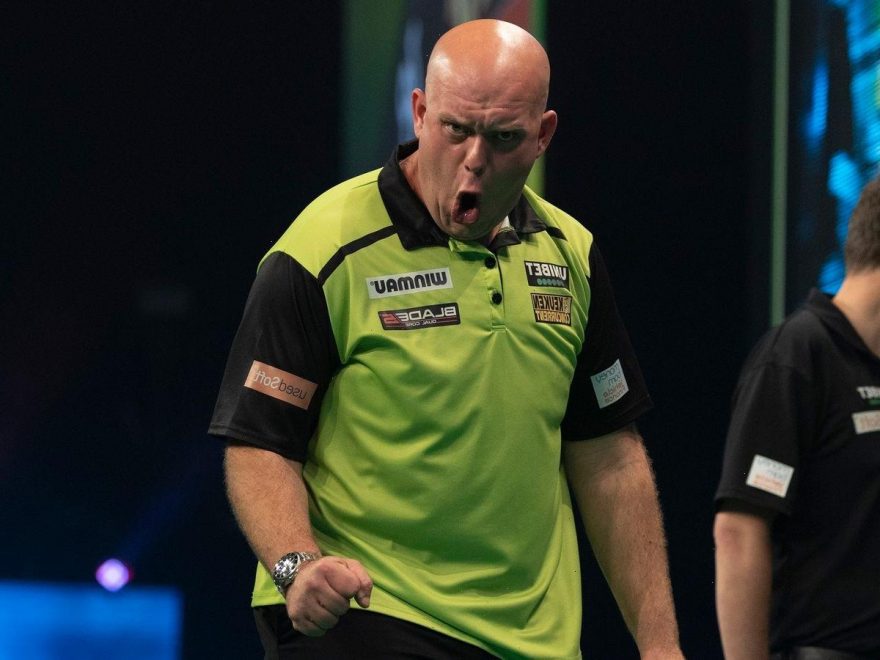 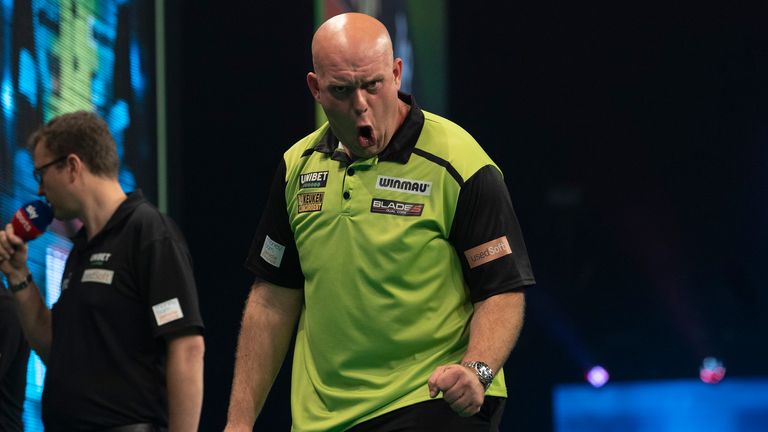 In an exclusive interview with Sky Sports, Michael van Gerwen looks ahead to the World Matchplay, vowing that his disappointing start to 2021 counts for nothing in a tournament he has won twice before and has more experience in than anyone else.

“I want to show the crowd and everyone what I’m capable of again,” says Van Gerwen. “When the crowd is in the venue, the blood through your body is pumping again and that is what I like.”

There is a smile on the Dutchman’s face as he ponders the return of an unrestricted full house at darts’ iconic home on the Lancashire coast – Blackpool’s Winter Gardens.

However, it’s not been Van Gerwen’s greatest season, to say the least. For the first time in 10 years, he is without a title at this stage in the calendar year and in recent times, the triumphs have dried up – there were just five last year, after 104 in the previous five years.

A familiar venue, a scene of former glories, and the crowd onside might be just what it takes to get the world No 3 back on track.

When the White Stripes’ Seven Nation Army fires up on Monday night, it will be played to the biggest crowd to have welcomed any arrows since the Premier League in Liverpool in March 2019.

Back then, Van Gerwen had just come off a victory at the UK Open. Remarkably, since then, he has claimed just a solitary major title and three Pro Tour titles, all of which came last year.

It’s unthinkable for a man who at the height of his powers was winning almost 50% of the tournaments he was entering.

There is no greater judge than the Dutchman himself.

“You need to win titles – that is the only thing that counts and if you don’t win titles, people judge you about it,” he says.

This year, Van Gerwen has yet to win any of the 23 tournaments on offer so far. He has been beaten in finals, semi-finals and first rounds since he last claimed a winner’s prize – the Players Championship Finals title in November. 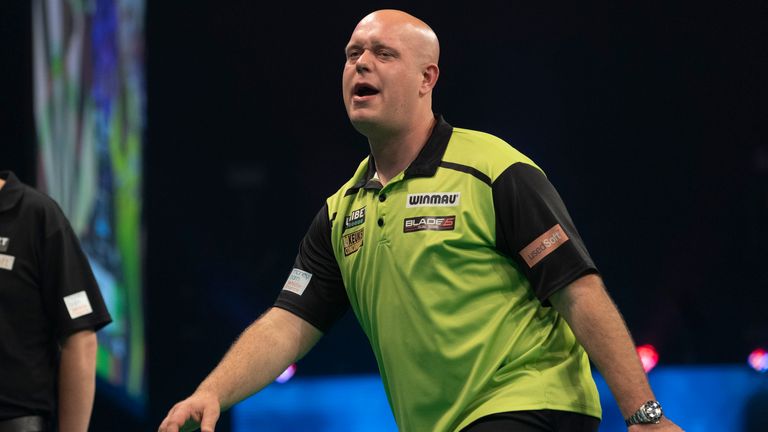 “Things are not going his way; players are playing well against him because they are seeing someone that isn’t oozing the confidence that he used to.

“You show any weakness in sport and you will be got at – very slowly, his confidence is being knocked.”

Van Gerwen can rightly claim to have come up against some inspirational opposition, such is the standard in the game right now.

Inconsistency was evident at the Premier League as moments of magic were followed by surprise defeats and even more surprisingly, averages in the low 90s. A ‘B’ game that was rock solid and good enough to beat many is no longer the case.

Defeats to Peter Wright in a Pro Tour final averaging 106 and against an inspired Luke Humphries in the UK Open semi-final can be explained, but there are a few too many of these types of losses.

“I have already had this for around a year now. Simon Whitlock did it against me, Luke Humphries. So many players overperformed to what they normally do.

“Of course, that can happen, they are good players, but it’s a bit unlucky. It wasn’t like I was playing a 92 average. If you are going to look to the overall averages of all players this year, I think I am second, and I didn’t win a tournament!

“It is annoying, but I think I have been a bit unlucky as well. It is one of those things.”

One thing going in Van Gerwen’s favour is the crowd. There is perhaps no other player in world darts who thrives as much in the cauldron that a full darts house provides.

On Monday night, with restrictions eased, there will be a capacity crowd in Blackpool as Van Gerwen takes centre stage. He got a small sample at the Premier League when the first crowds in more than a year, outside of one day at the World Championship, were welcomed into a darting venue.

“I am looking forward to Blackpool. It is a tournament I love with the format and everything, so I hope I can do some damage there. I feel good about it.

“It is a lovely venue, with the ceilings. It’s wonderful. It feels like it is your first time again probably, because with the crowds and everything, it is a bit new.

“I have been practising hard, I am starting to pick up my game. I think I am playing quite well at a decent level. I know there are a few steps to make, but I am capable of doing that I think.

“It is a massive tournament and not only that, the crowds are coming back and to play a big tournament again after a little while is always nice.”

Van Gerwen mentions why he loves the Matchplay and there is no doubt the gruelling format – the first to 10, 11, 16, 17 and 18 – plays into his hands, when he plays well.

MvG has great memories of the Matchplay. He won back-to-back titles in 2015 and 2016 but they were the last of his three finals. His recent form in the tournament is more reflective of his 2021 struggles.

His last three years in the Matchplay has yielded just two victories. He has been beaten by Simon Whitlock, Glen Durrant and Jeffrey de Zwaan, but after a year behind closed doors, he is looking forward to the Winter Gardens.

“Normally yes, but not the last few years,” he laughs.

“I like the tournaments with the big format, it is amazing, but you still need to throw your darts and you are still not allowed to miss.

“I want to show the crowd and everyone what I am capable of again. When the crowd is in the venue, the blood through your body is pumping again and that is what I like.” 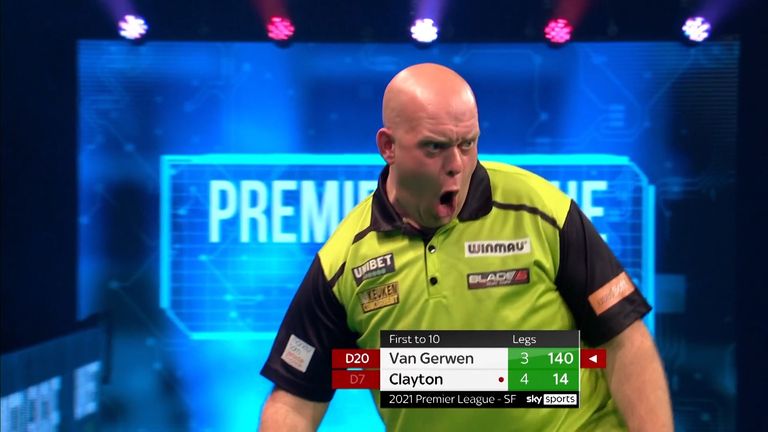 So it’s back to that walk-on, that crowd and the venue. When the familiar thud of the baseline signals Van Gerwen’s emergence, the blood will start pumping again.

He is perhaps under more pressure than he’s ever been, but only because of the barely believable standards he set himself. Van Gerwen has spent so long talking about how good he is because he really has been that good.

With no title in 2021, he starts his bid to win one of the biggest of them all, and there’s time for one more question. Does he think he will be lifting the Phil Taylor Trophy on Sunday night?

“From September onwards, it is going to get really busy with a lot of big tournaments. With all due respect, that is the time of year you have to be good towards the World Championship.

“Every tournament I am competing in, I want to win, but at the end of the year, it’s the really big one I want to have back in my trophy cabinet at home.”

Watch the World Matchplay from the iconic Winter Gardens all the way through until Sunday, July 25. Check out daily Darts news on skysports.com/darts, our app for mobile devices and our Twitter account @skysportsdarts