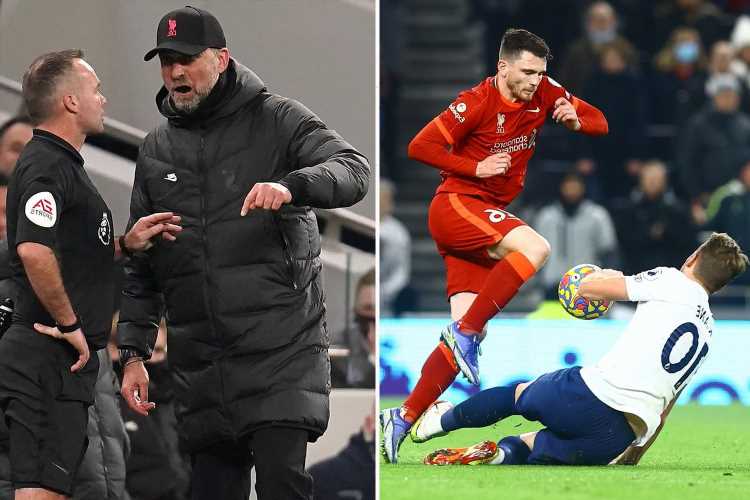 JURGEN KLOPP launched a blistering attack on referee Paul Tierney both during and after Liverpool's 2-2 draw with Tottenham.

The German was booked by the referee during the pulsating match for his protests to Harry Kane picking up only a yellow card for his dangerous tackle on Andy Robertson. 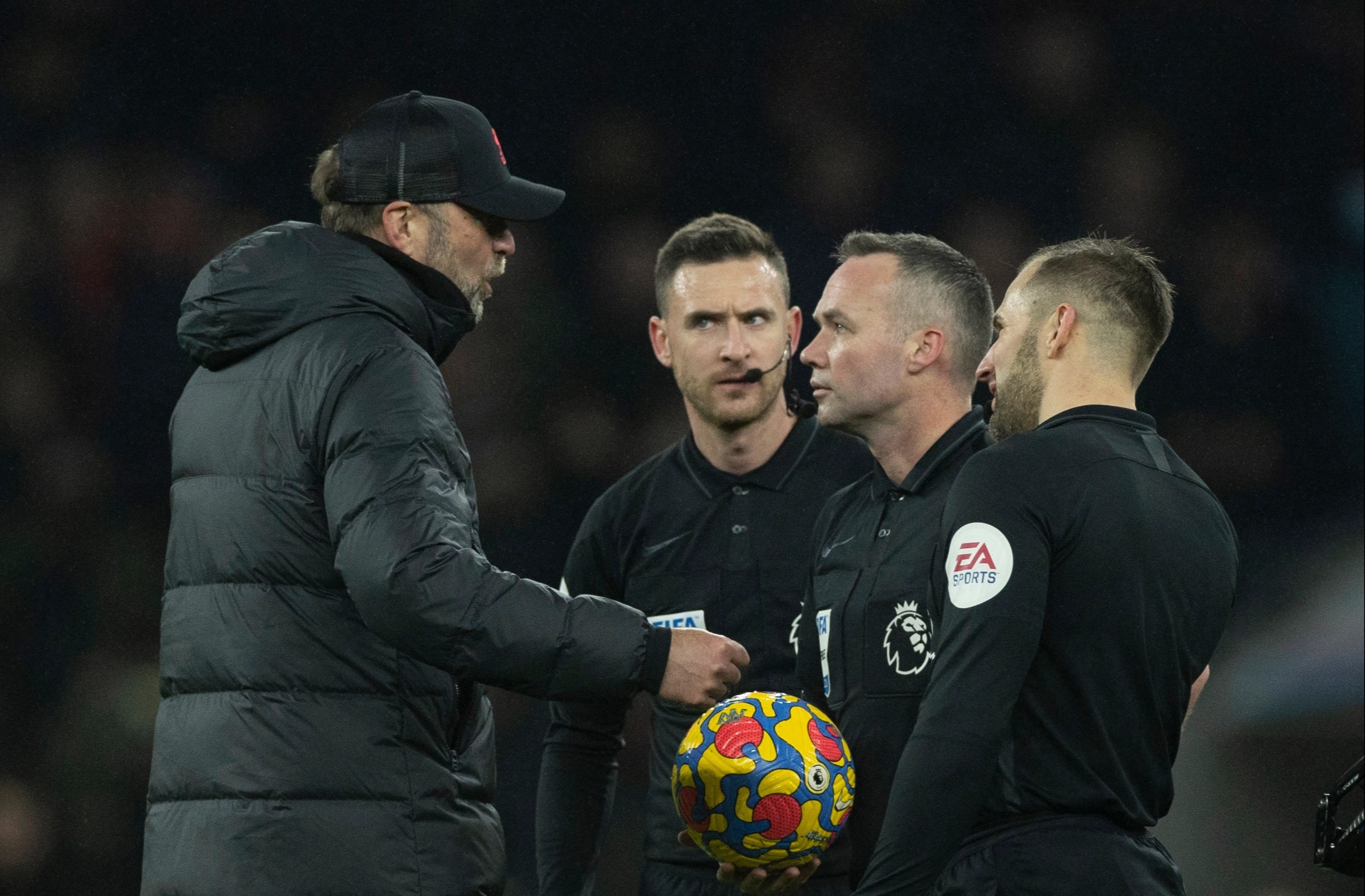 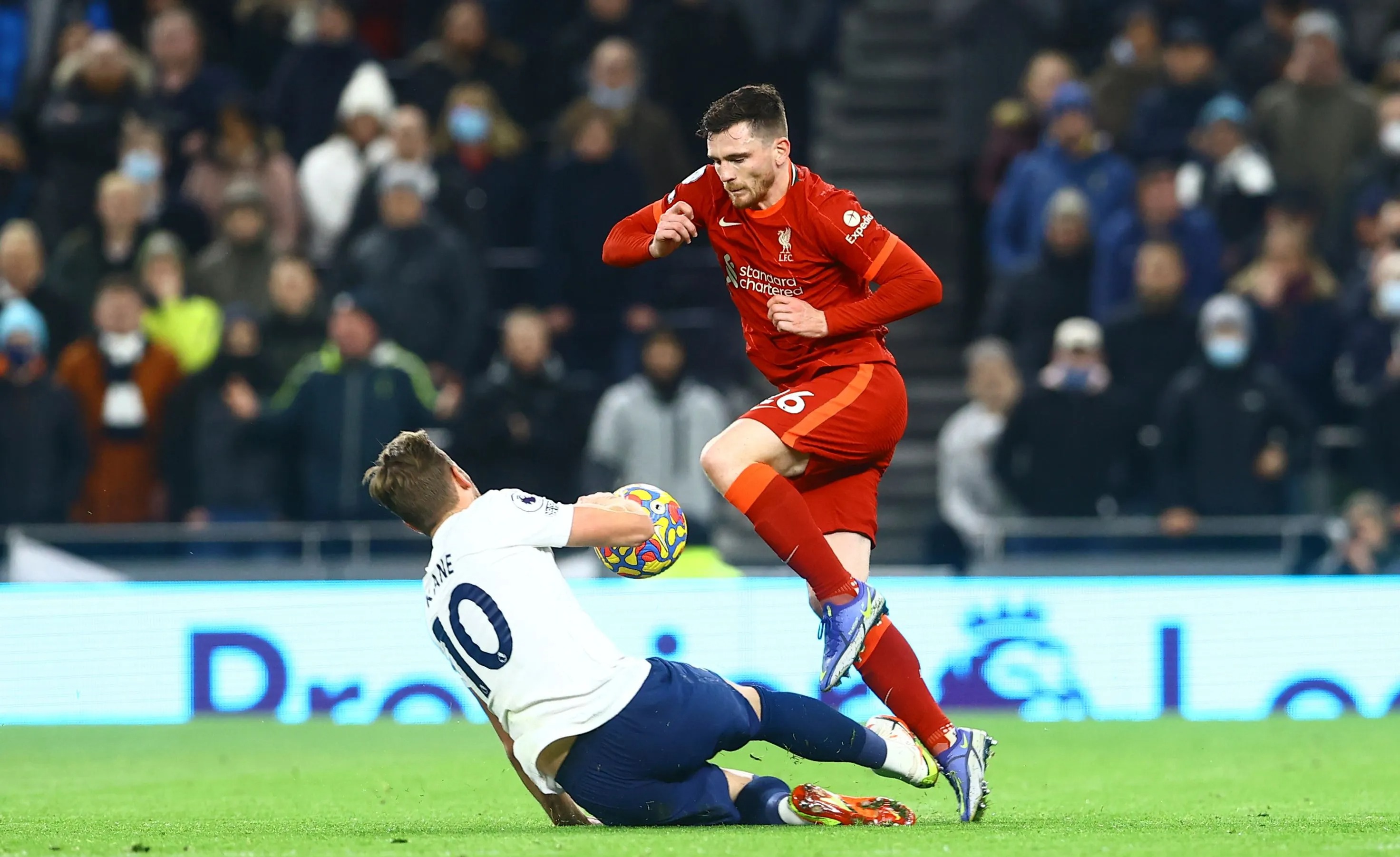 He was also left raging after Diogo Jota was denied a penalty.

Klopp made his feelings known at the end of the match.

He confronted Tierney at the final whistle and told him: “I don’t have a problem with referees, only you.

“Anyone who has played football knows you can’t stop there to win a penalty.”

And after the match the Liverpool boss said to Sky Sports: "It is always helpful when you play football yourself. When you see the situation back (Jota’s penalty appeal), the VAR is there. Why is he stopping? I don’t understand.

"The draw is fine. We are not crazy enough to think we cannot draw at Tottenham but these situations are crucial.

“I have no idea what his [referee Paul Tierney] problem is with me.

Cristiano building £7m mansion for when he quits football

"But just an objective ref who sees the situations and judges them. He told me he thinks he stops on purpose. It is incredible. He had the best spot on the pitch and doesn’t give it. You will have to ask him what his problem is with me."

As well as Kane avoiding a red card, Tierney also refused to give The Reds a penalty when Jota was brought down, while Robertson was sent off late on.

"You can give Robbo a red card. It is not the smartest challenge but that (Kane's challenge) is definitely a red card. No doubt about it.

"His (Robertson's) leg was in the air, it was pure coincidence. Harry cannot judge it. If Robbo’s leg is on the ground it is a broken leg.

"We have a VAR sitting there and he thinks have a look again at Robertson again. Fine that’s what he is there for. But what did he do in that situation? And then there is the penalty situation with Diogo Jota.

“Mr Tierney told me Diogo [Jota] stops on purpose because he wants the foul. First and foremost if you want to shoot you have to stop because you cannot do both."

VAR determined Kane's challenge to only be a yellow because it lacked intensity, pointing out the fact Robertson lifted his leg which meant he did not receive the full force of the impact.

But that decision baffled a number of viewers including Sky Sports pundit Jamie Carragher.

He agreed with Klopp saying: "I don't understand the terminology used. VAR is talking about speed and intensity, Kane is sprinting and lunges in, that is nonsense.

"Yes, you cannot condone speaking to a referee but managers are emotional.

"We want managers to be honest and emotional and the decisions that go against Liverpool, it was a blatant penalty, Harry Kane should have been sent off."

And Jamie Redknapp added: "That is a red card. When you go in and use that amount of force, right now how the game is, he is out of control.

"If Robertson's foot is on the floor he snaps his leg. It is not intentional, he is not that type of player. Being England captain, reputation helps a lot."