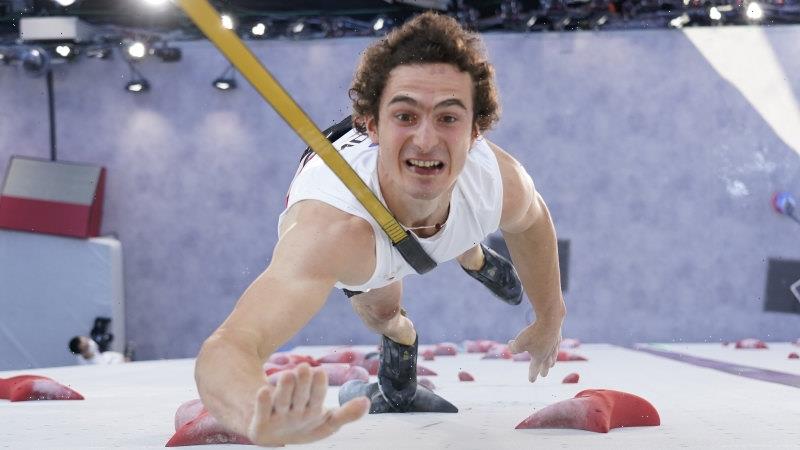 Some years ago, when the NSW State of Origin team was staying at the Crowne Plaza in Coogee, players were given a strict curfew by which time they had to be in their rooms.

One evening, a player climbed from his balcony and down three storeys, before racing off into the night. He returned just before dawn, scaling the outside of the hotel like a ninja, sneaking into bed before anyone had noticed his absence.

I’d pay to see that. Sport climbing? Not so much.

How is this an Olympic sport? How is it even a thing?

There are three elements to sport climbing in Tokyo: speed climbing, bouldering and lead climbing.

“Speed climbing is all about speed,” explained the rather enthusiastic commentator on the world feed. There you go. 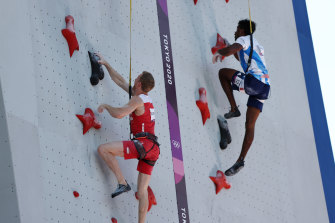 Jakob Schubert of Austria and Bassa Mawem of France in the incredibly underwhelming Olympic sport of climbing.Credit:Getty

Competitors zoom up a 15-metre wall like they’re part Spiderman, part crab – a spider-crab if you will – touching a pad at the top to signal the end of their run.

It’s quite spectacular, but you quickly realise if you’ve seen one run, you’ve seen them all.

A suggestion: get rid of the safety rope. That’ll make it interesting.

Next up, bouldering. Competitors have five minutes to work out how to hold and climb various shapes, using nothing more than their wits and a ridiculous amount of white chalk, to reach another pad at the top.

This is where the sport becomes mind-numbingly dull for the casual observer. Watching people stroking their chins, wondering how to problem solve a wall then trying to climb it before falling off eight times isn’t my idea of “sport entertainment”.

It’s more interesting than the other two. Competitors perform “dynos” – short for “dynamic” – using the momentum of their bodies to get from one hold to another. 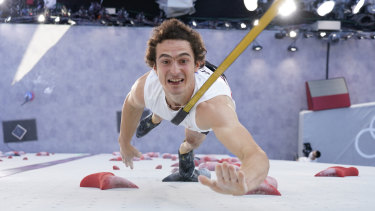 Adam Ondra, of the Czech Republic, participates during the speed qualification section of the men’s sport climbing.Credit:AP

“Dynos are the coolest move in climbing,” says the media guide. Way cool.

Again, the removal of the safety rope would make this component more watchable. Maybe not.

I’m being silly, of course. Sport climbing requires physical and mental strength, neither of which are required for those of us sitting on the futon getting lactic acid of the thumb from changing channels.

The humid conditions at the Aomi Urban Sports Park have been taxing, too. Some competitors complained about skin peeling from their fingers.

Medals will be decided in coming days but what of sport climbing’s future?

“It doesn’t really have too much support in our climbing society,” Czech climber Adam Ondra said. “A lot of people are afraid that maybe some of the crags and outdoor climbing will maybe be too crowded in the future.”

Maybe. I can’t see the masses scrambling to their nearest cliff face anytime soon, wondering how to climb it, but you never know.

I can understand the funky hepcats at the IOC wanting the Olympics to appeal to a younger demographic, but it needs to be more discerning with the sports it includes. This is the Olympics, not It’s a Knockout.

I mean, breakdancing makes its debut at Paris in 2024. If performing the “caterpillar” and “arm wave” is considered sport, so should State of Origin balcony climbing.

The cover-up is always worse than the crime.

You think some of the very experienced senior figures at the AOC would’ve known this before botching the not-so-scandalous scandals involving athletes having a post-competition drink at the Olympic Village and then on a flight from Tokyo to Sydney.

First, Australian athletes joined those from other countries at a party in the village, near the Olympic rings, breaching biosecurity regulations.

Then nine athletes got rowdy on a plane, had too much to drink, stood in the aisles – I know, shoot them! – before one had a technicolour yawn in the toilet.

Sure, it’s not a good look, and annoying for other passengers, but considering these young athletes just competed at an Olympics and couldn’t stay behind to celebrate before going into quarantine, alone, for two weeks, let’s cut them a little slack, shall we?

In its infinite wisdom, the AOC decided to sit on the plane incident for four days before dispatching a pearl-clutching media release late on Tuesday night about various investigations into “unacceptable behaviour”, mostly from the rugby and football squads.

What a cop-out in handballing the issue to Rugby Australia and Football Australia. They’re wearing Australian Olympic tracksuits. It’s the AOC’s responsibility.

A minor indiscretion on a plane now dominates the news cycle instead of big wins in hockey, basketball, beach volleyball and boxing, not to mention the enthralling sport climbing program. 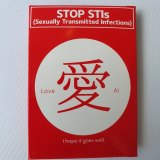 Condoms handed out at the Olympics.

“I hope it goes well!” — The positive affirmations on the packets of condoms handed out in the Olympic Village is a nice touch from organisers. Another condom features loaves of baked bread, presumably suggesting they are buns you don’t want in an oven.

THUMBS UP
Not sure about you but I spent Wednesday afternoon captivated by the final of the women’s park skateboarding. The average age of the final group was 17. Sakura Yosozumi, 19, won gold ahead of Kokona Hiraki, 12, and Sky Brown, 13.

THUMBS DOWN
Did a publicity hungry fish cost Australian Kareena Lee a chance of claiming silver in the marathon swimming? “It jumped up and hit me on the chest!” she said after taking bronze, an outstanding effort nonetheless.

It’s a big day 13 at the Games for … the Kookaburras, who last won gold in men’s hockey in 2004 and meet Belgium in the final on Thursday night. Tim Brand is da man. Good luck to them.

It’s an even bigger day 13 at the Games for … Patty Mills, who will lead the Boomers against Team USA in search of Australia’s first medal in men’s basketball. He’ll eyeball Kevin Durant, his Brooklyn Nets teammate next season, in Thursday’s semi-final.

Never miss a medal or great sporting moment with our Olympic update emailed daily. Sign up for our Sport newsletter here