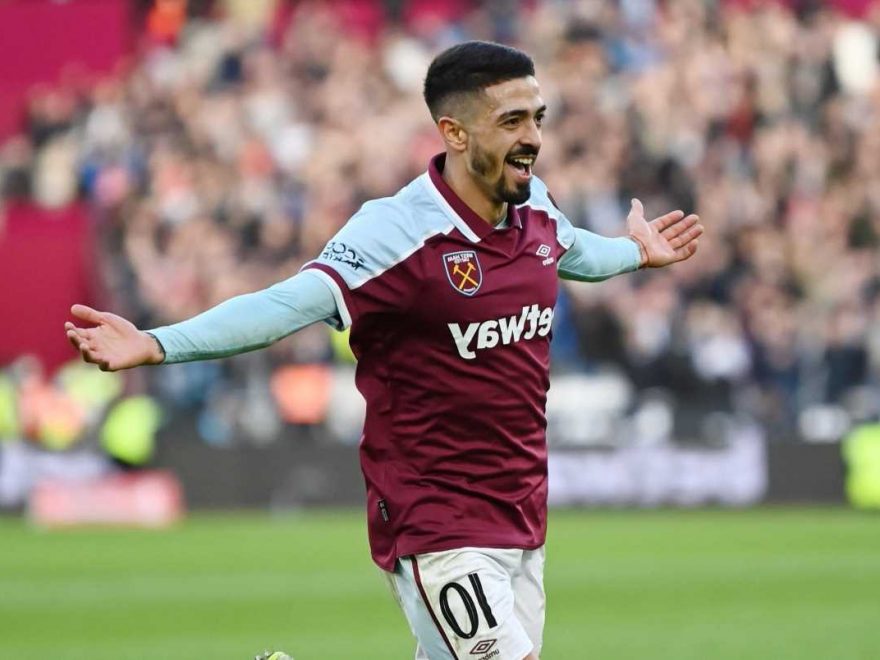 LEEDS’ FA Cup misery continued as they were bundled out in the third round of the competition for the fifth season in a row.

It was way back in January 2017 that one of the great names of English football last managed a victory in the world’s oldest tournament. 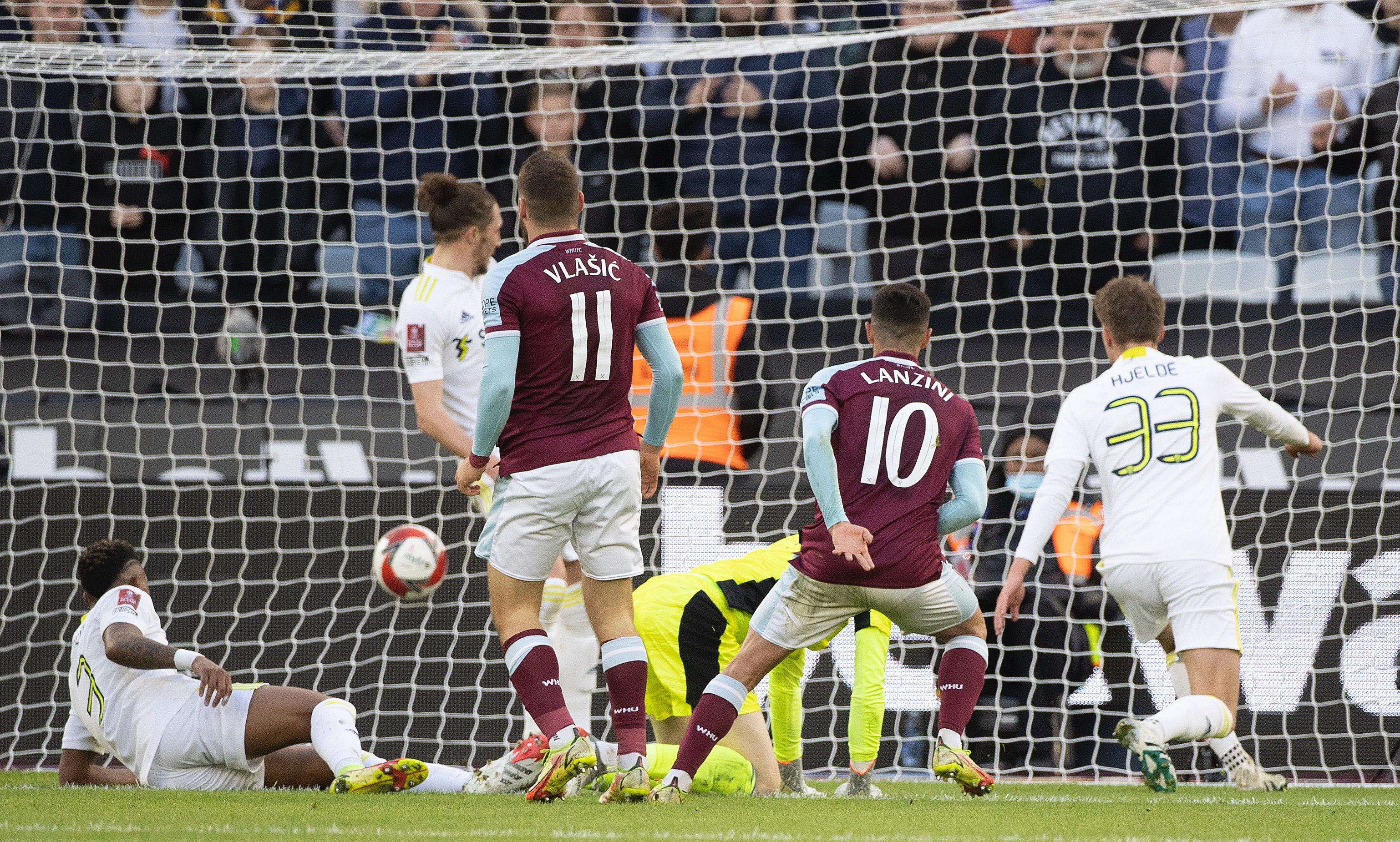 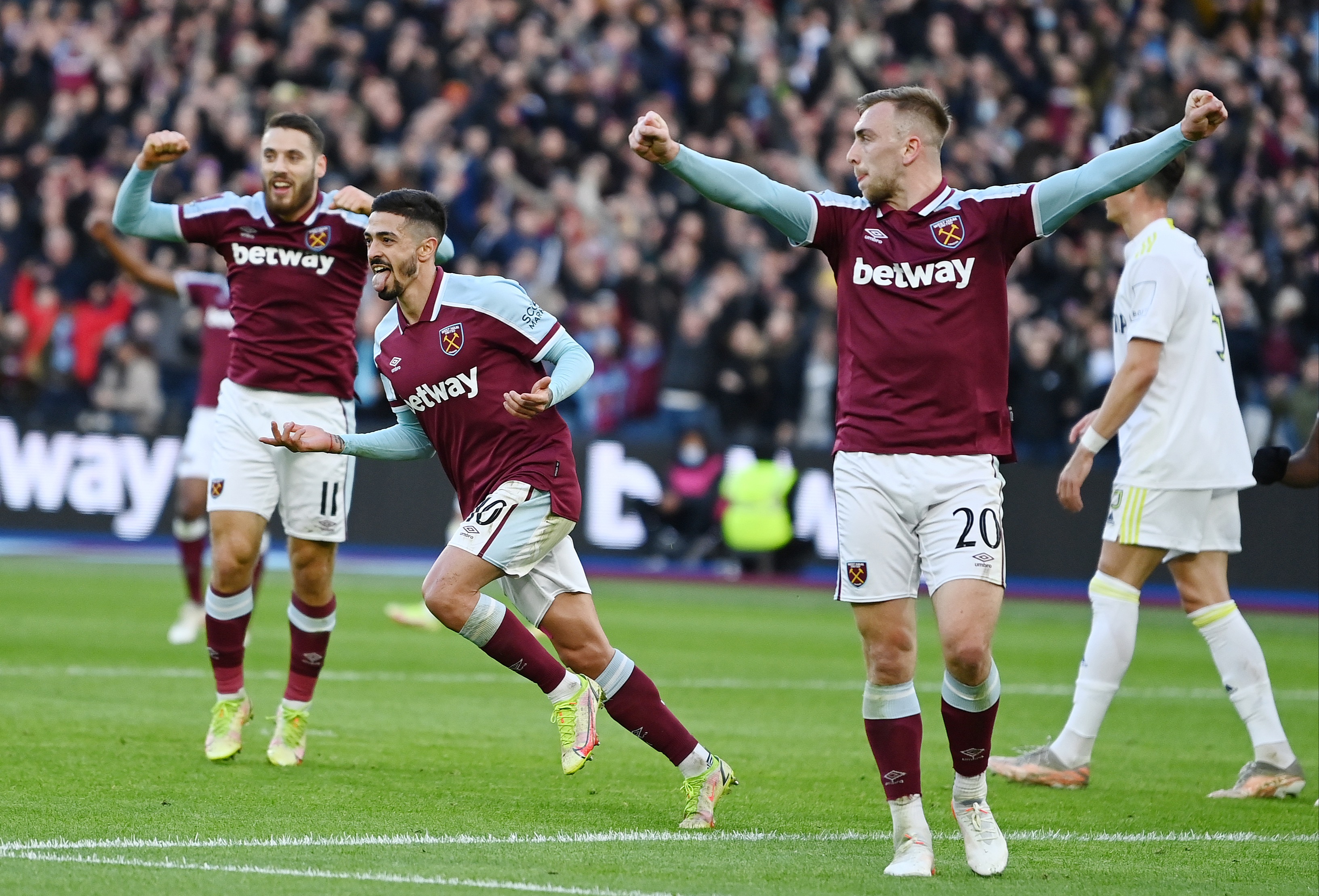 And even then they were beaten by non-League Sutton United in the very next round.

Since then they have been beaten by Newport, QPR, Arsenal and, infamously, a 3-0 defeat by Crawley Town last year.

Bielsa has often been accused in the past of failing to show sufficient respect to the FA Cup with some of his team selections.

But with eight senior players unavailable due to illness, injury and suspension, he really didn’t have too many opportunities to tinker with his line-up this time.

That meant Leeds debuts for teenagers Lewis Bate and Leo Hjelde as well as a first senior start for 19-year-old Sam Greenwood.

MY NIGHT WITH GREALISH

Jack invited me to a party night thriller at villa, says Towie Chloe

ALL HANDS ON BECK

So it was little wonder that the 8,000 travelling Leeds fans made the journey south more in hope than expectation.

Not that their team’s miserable Cup record appeared to curb their enthusiasm as they serenaded their team from kick-off to the final whistle.

For Bielsa can do no wrong in their eyes and even another early exit from the competition which Leeds last won 50 years ago was not going to diminish their affection for the veteran Argentine.

And it’s a sure bet that most of them will be back at the London Stadium for next Sunday’s Premier League rematch.

Yet they will have to show more than they managed on this occasion if they are going to ease their mounting relegation fears next week.

Because they were under the cosh right from the start against a West Ham team who have suffered more than their own share of FA Cup embarrassment in recent years.

But those days of disappointment have been banished by David Moyes, who went with virtually his strongest available line-up to ensure a place in the fourth round draw.

They could have been ahead as early as the tenth minute when Bowen pounced on a tame headed clearance from Robin Koch but saw his shot cleared off the line by Luke Ayling.

Michail Antonio’s shot on the turn from the edge of the area just cleared the bar with the faintest of deflections off Diego Llorente as Leeds clung on for dear life.

And the visitors were probably fortunate not to concede a 23rd minute penalty when the ball struck Hjelde’s hand as he competed with Craig Dawson for Declan Rice’s free-kick.

But VAR Peter Bankes decided that the young Norwegian was too close to be able to move his arm out of the way and advised referee Stuart Attwell to play on.

Yet there was to be no let-off for the visitors when West Ham finally secured their lead their domination deserved in the 34th minute.

Once again 18-year-old Hjelde was in the thick of the action as he dived in to block as Nikola Vlasic prepared to pull the trigger. 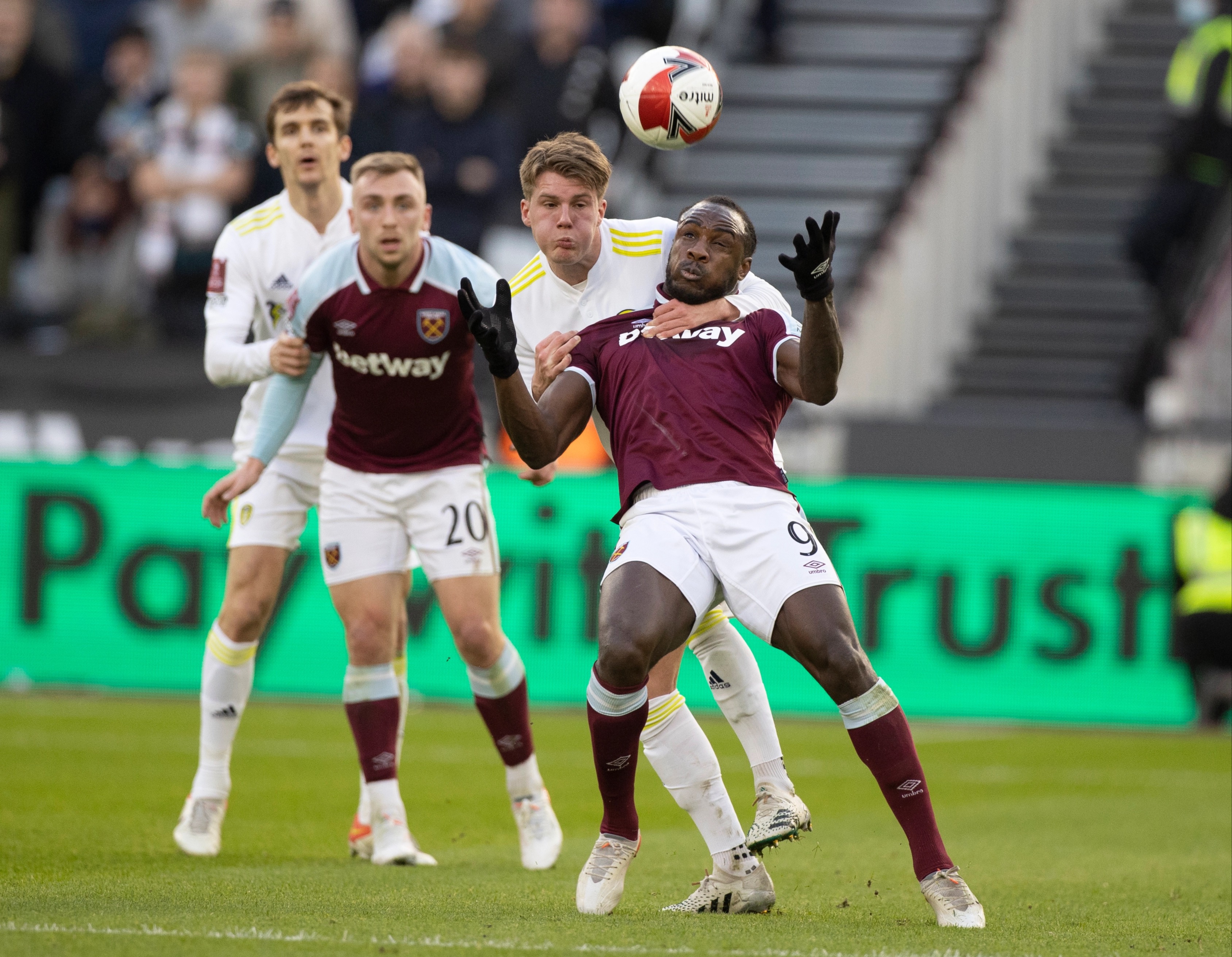 But with keeper Illan Meslier unable to gather the loose ball and a mass of bodies scrambling for possession, Lanzini stepped in to take control with a decisive shot to break Leeds’ resistance.

The visitors were convinced that Bowen had been in an offside position before he had joined in the melee leading up to Lanzini’s strike.

But after a lengthy review of the action, Bankes ruled that it was Junior Firpo rather than Bowen who had applied the final touch which set up Lanzini.

Antonio fired wide on the stretch and Meslier, who appeared to be wearing non-stick gloves, saved at the second attempt from Ryan Fredericks as West Ham looked to put the tie to bed before half-time.

Leeds had barely troubled Hammers keeper Alphonse Areola, with a tame shot from Bate and a wild miskick from the former Chelsea prodigy the closest they had managed during a one-sided first 45 minutes.

Bielsa sought to add a bit more bite to his team with the introduction of top scorer Raphinha as a half-time replacement for Greenwood. 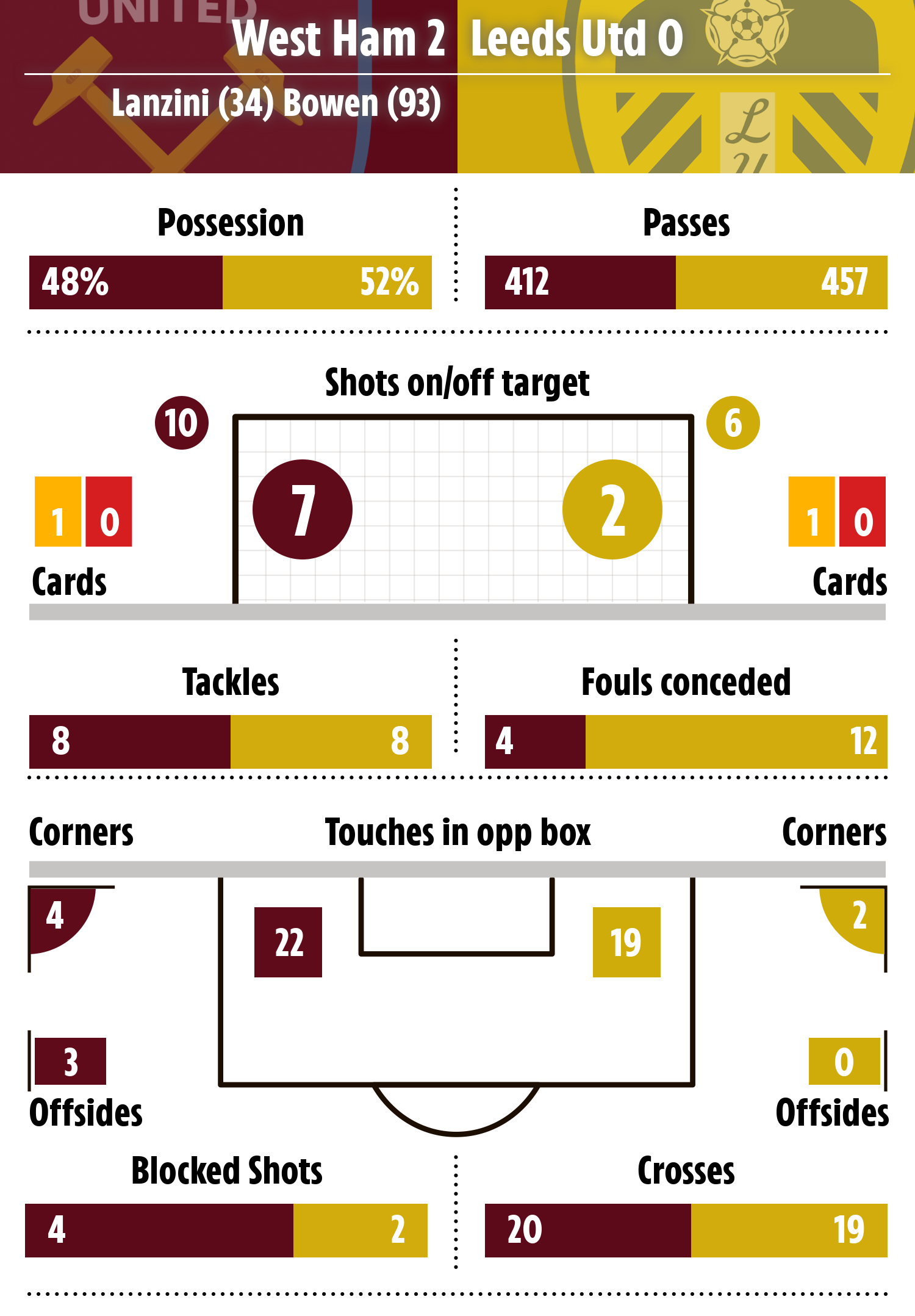 And they should have levelled in the 73rd minute when Mateusz Klich volleyed across the face of goal and Jack Harrison somehow managed to miss the target from a yard out.

It was an astonishing miss by the former Manchester United forward and one that was matched two minutes from time when Daniel James failed to turn in Harrison’s low cross with the goal gaping.

But confirmation that Leeds would be making yet another early exit from the competition only came deep into stoppage time when Antonio raced clear on the counter to tee up Bowen for the kind of finish which was beyond the visitors.