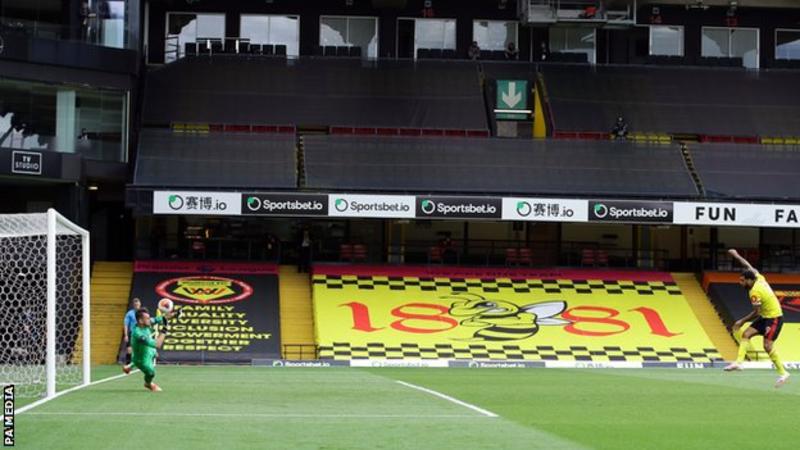 Watford boss Nigel Pearson insists “our job is not finished yet” despite seeing his side move six points clear of the bottom three with a win over Newcastle.

Troy Deeney scored two second-half penalties as the Hornets came from behind once more to beat the Magpies and open up vital breathing space as they battle to avoid relegation from the Premier League.

Asked afterwards if he felt safe, Pearson told BBC Match of the Day: “Anything can happen. We have to keep our focus now, and it is not about thinking the job is done – we have got three more games to make sure we win enough points ourselves.

“What happens elsewhere can help, but if you are reliant on that you are in for a bit of a shock, so our focus has to be there.”

Newcastle were the better side in the first half at Vicarage Road and deserved the lead given to them when Dwight Gayle turned in Federico Fernandez’s flick from Matt Ritchie’s corner in the 23rd minute.

Watford, who hit the post through Danny Welbeck, were indebted to a vital save by Ben Foster from Allan Saint-Maximim before the break – leaving them in position to mount another recovery in the second half.

They were handed a lifeline after 52 minutes when Deeney drilled home a spot-kick following Ritchie’s foul on Kiko Femenia, and he repeated his heroics nine minutes from time after Javier Manquillo hauled down Ismaila Sarr in the box.

It gave Watford a priceless three points as they showed the same powers of recovery that saw them overturn a 1-0 deficit to beat doomed Norwich City in their previous home game – and crucially leaves them six points clear of Bournemouth in the bottom three, although the Cherries have played a game less.

Watford were bottom, seven points adrift of safety after 16 games, when Pearson took charge for the first time on 14 December, but he says positive thinking has been behind their climb up the table.

Pearson explained: “We are always working hard to try to find the solutions to the situation we find ourselves in.

“Back in December it didn’t look possible and we have had some decent runs and difficult times but throughout it all you have got to remain with a balanced view.

“We know we’ve got good players and really important match-winners but this win was about us being able to respond to disappointment and still being able to function. That is not easy, especially with there being no fans, but it has been a reasonable week for us so far.”

Watford needed a big performance to rescue a mediocre first 45 minutes that left them facing defeat against visitors who had looked sharper and more urgent.

Cometh the hour cometh Watford’s talisman, though, as captain Deeney put a barren sequence of only one league goal in his previous 10 games behind him to make the contribution that could yet keep the Hornets in the top flight.

The goals may have come from the penalty spot but the 32-year-old showed commendable nerve on both occasions, using his tried and trusted technique of sheer power to beat Newcastle keeper Martin Dubravka for the first spot-kick then winning a battle of wits to deliver in similar style late on when the pressure was at its peak.

It was just what Watford required to build on the home win against Norwich City, ensuring momentum was maintained and increasing the peril for the likes of Bournemouth and Aston Villa with Norwich City now relegated.

Manager Nigel Pearson has been involved in great escapes before, as an assistant at West Bromwich Albion and in charge at Leicester City – and this result goes a long way towards helping him preserve that record.

Newcastle run out of steam 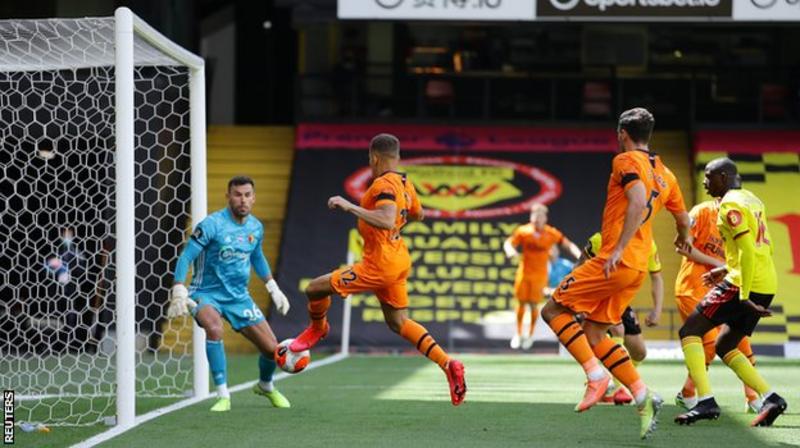 Newcastle manager Steve Bruce would have been confident his side would make amends for the embarrassment of their 5-0 thrashing at Manchester City after a confident and impressive first half.

Sadly for Bruce and Newcastle, it was all downhill once referee Craig Pawson penalised Ritchie when his knee made contact with Femenia in the area just after half-time.

Watford gained the upper hand and did not let go as Newcastle faded badly, their fate sealed by Manquillo’s unwise decision to tangle with Sarr as the Watford forward raced into the danger zone late on.

Given all the pre-season pessimism, and the lukewarm reception he received after succeeding the popular Rafael Benitez on Tyneside, Bruce has done a highly respectable job in consolidating Newcastle, especially with takeover talk a constant sub-plot to his work these days.

Now he must ensure Newcastle’s season does not fizzle out too much at the finale. 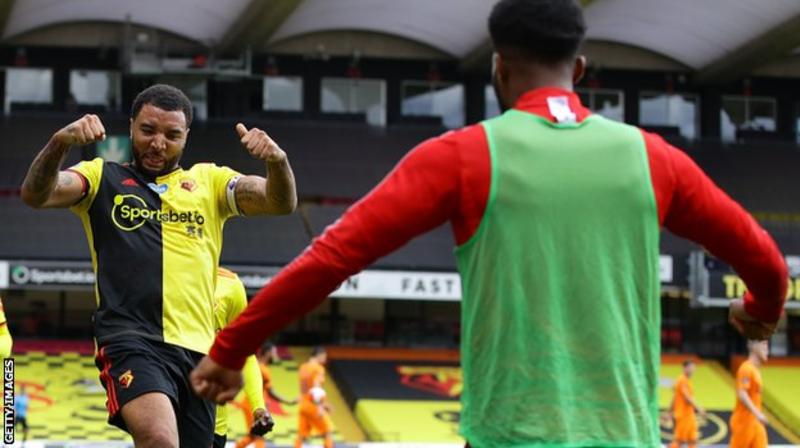 What next? West Ham await Watford

Newcastle play Tottenham at home on Wednesday (18:00 BST) while Watford’s next test is a trip to fellow strugglers West Ham on Friday (20:00 BST).

Fabian Schär (Newcastle United) wins a free kick in the defensive half.

Allan Saint-Maximin (Newcastle United) wins a free kick in the attacking half.

Craig Dawson (Watford) wins a free kick in the defensive half.

Will Hughes (Watford) is shown the yellow card for a bad foul.

Foul by Will Hughes (Watford).

Joelinton (Newcastle United) wins a free kick in the defensive half.

Attempt missed. Emil Krafth (Newcastle United) header from outside the box misses to the right. Assisted by Allan Saint-Maximin.

Fabian Schär (Newcastle United) wins a free kick in the defensive half.

Fabian Schär (Newcastle United) is shown the yellow card for a bad foul.

Will Hughes (Watford) wins a free kick on the right wing.

Attempt blocked. Troy Deeney (Watford) right footed shot from the centre of the box is blocked. Assisted by Will Hughes.

Goal! Watford 2, Newcastle United 1. Troy Deeney (Watford) converts the penalty with a right footed shot to the high centre of the goal.

Penalty conceded by Javier Manquillo (Newcastle United) after a foul in the penalty area.

Federico Fernández (Newcastle United) is shown the yellow card for a bad foul.

Miguel Almirón (Newcastle United) wins a free kick in the defensive half.