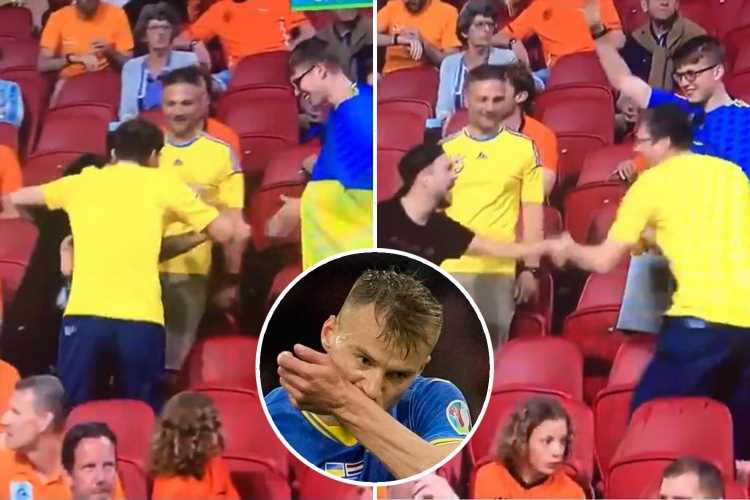 THIS is the classy moment a humble Holland fan congratulated three jubilant Ukraine supporters after Andriy Yarmolenko scored a blinder for their team.

The West Ham winger curled a beauty into the top corner to make it 2-1 to the Dutch during their Euro 2020 opener and Ukrainian fans in the stadium went mad. 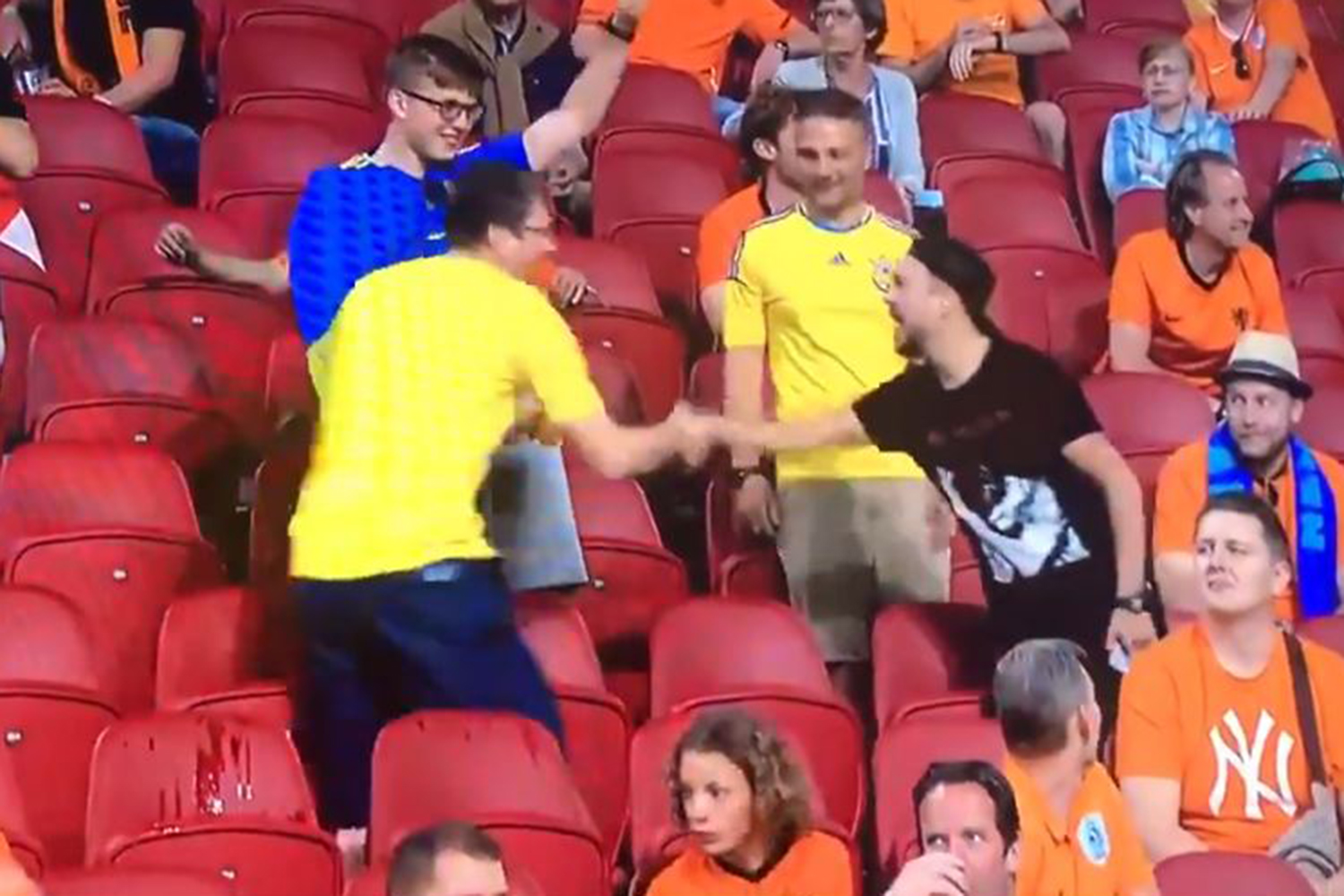 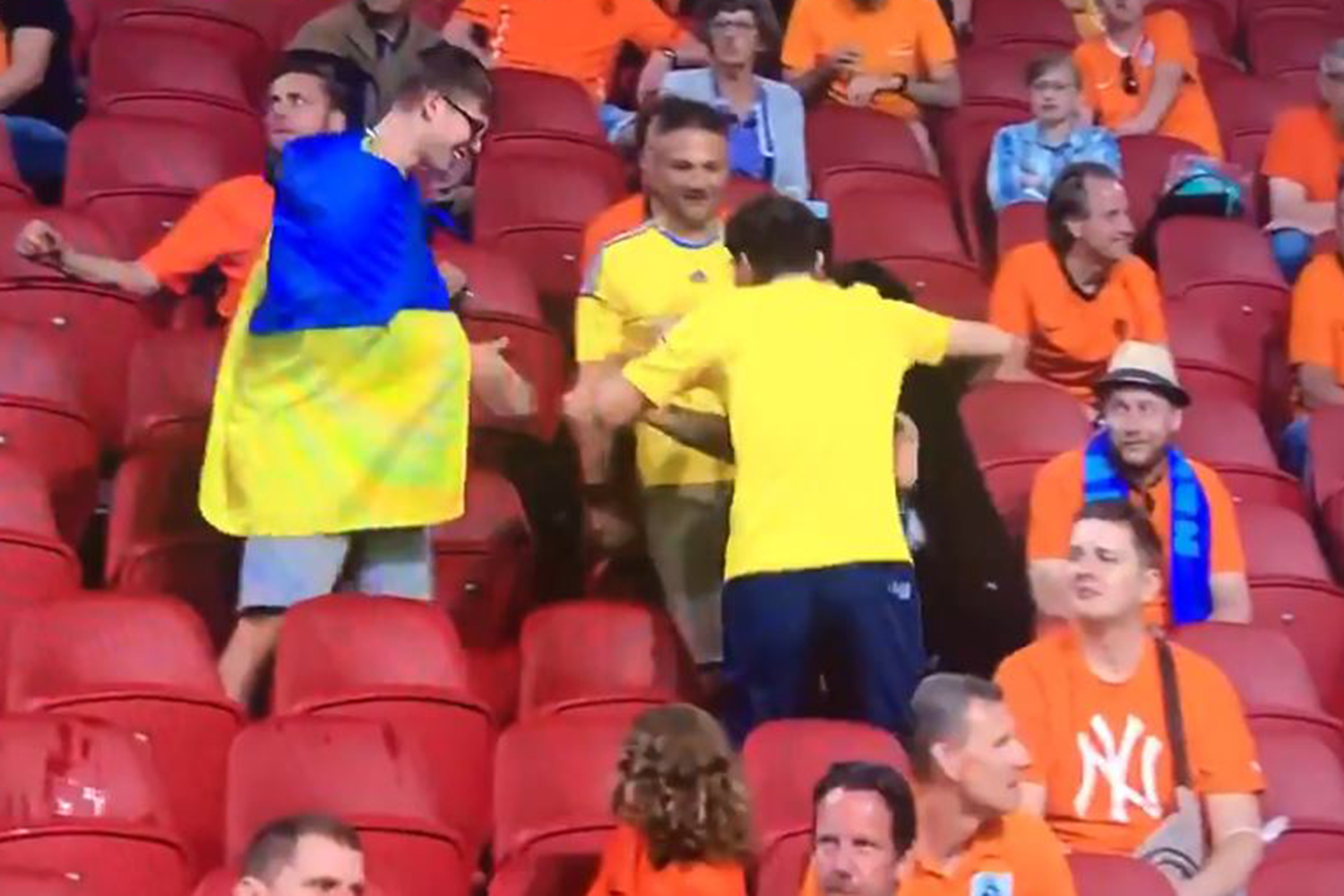 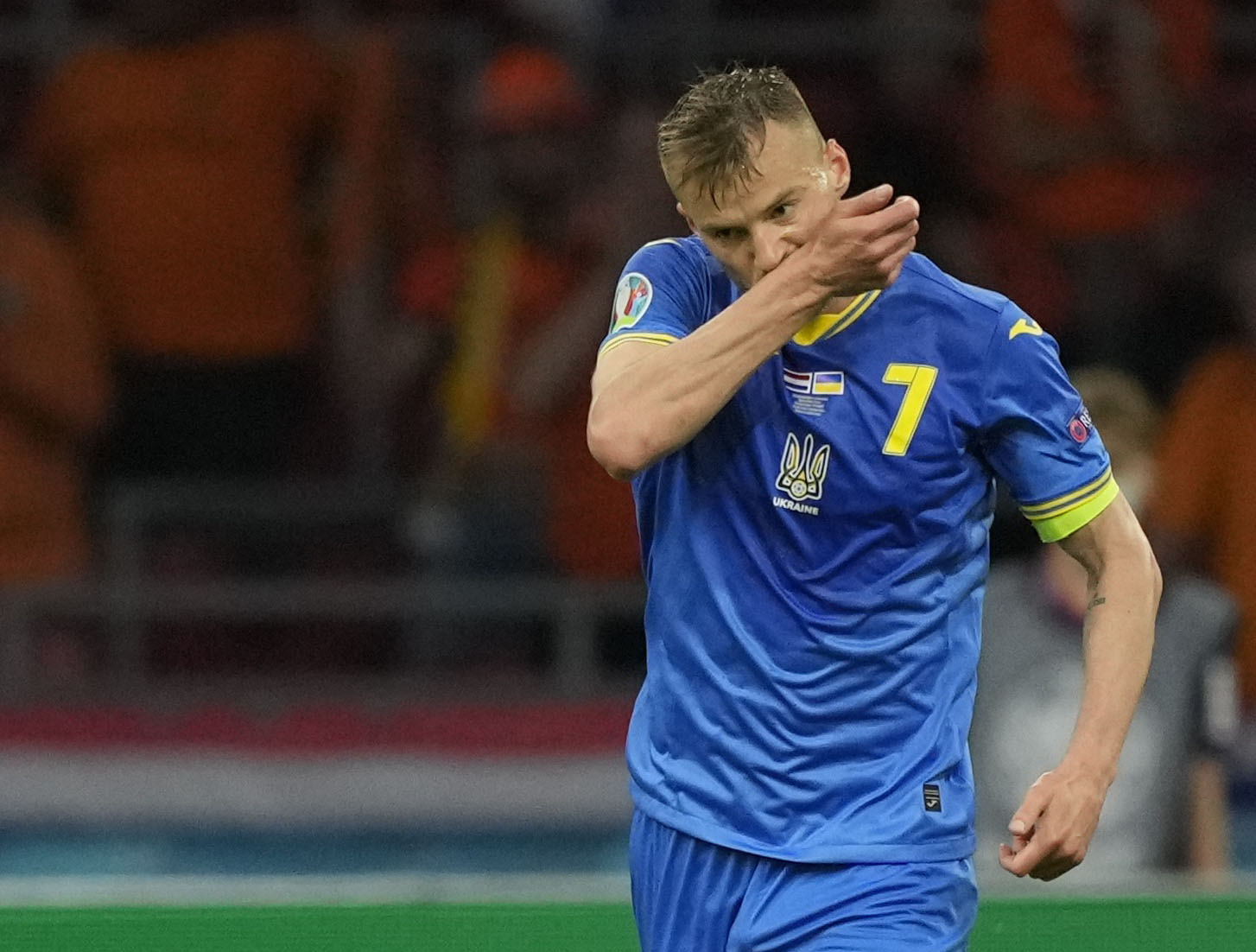 Holland led the Group C encounter 2-0 after Gini Wijnaldum and Wout Weghorst scored on 51 and 58 minutes.

And the Dutch seemed to be cruising to a perfect Euros start until Ukraine legend Yarmolenko popped up.

In trademark fashion, the No 7 cut inside from the right and hooked a left footed effort from around 23 yards.

It curled over Maarten Stekelenburg and dipped just under the crossbar to give Ukraine hope in Amsterdam.

When the peach of an effort went in, cameras panned to three men in Ukraine kits jumping up and down and dancing.

One was sloshing beer everywhere as a man in black approached the trio.

At first glance it looked like he was having a go but on closer inspection the Holland fan was actually giving a thumbs up and extending his hand to shake hands and congratulate the men.

He said 'fair play, that was a belter' before proceeding to hug the delighted group. 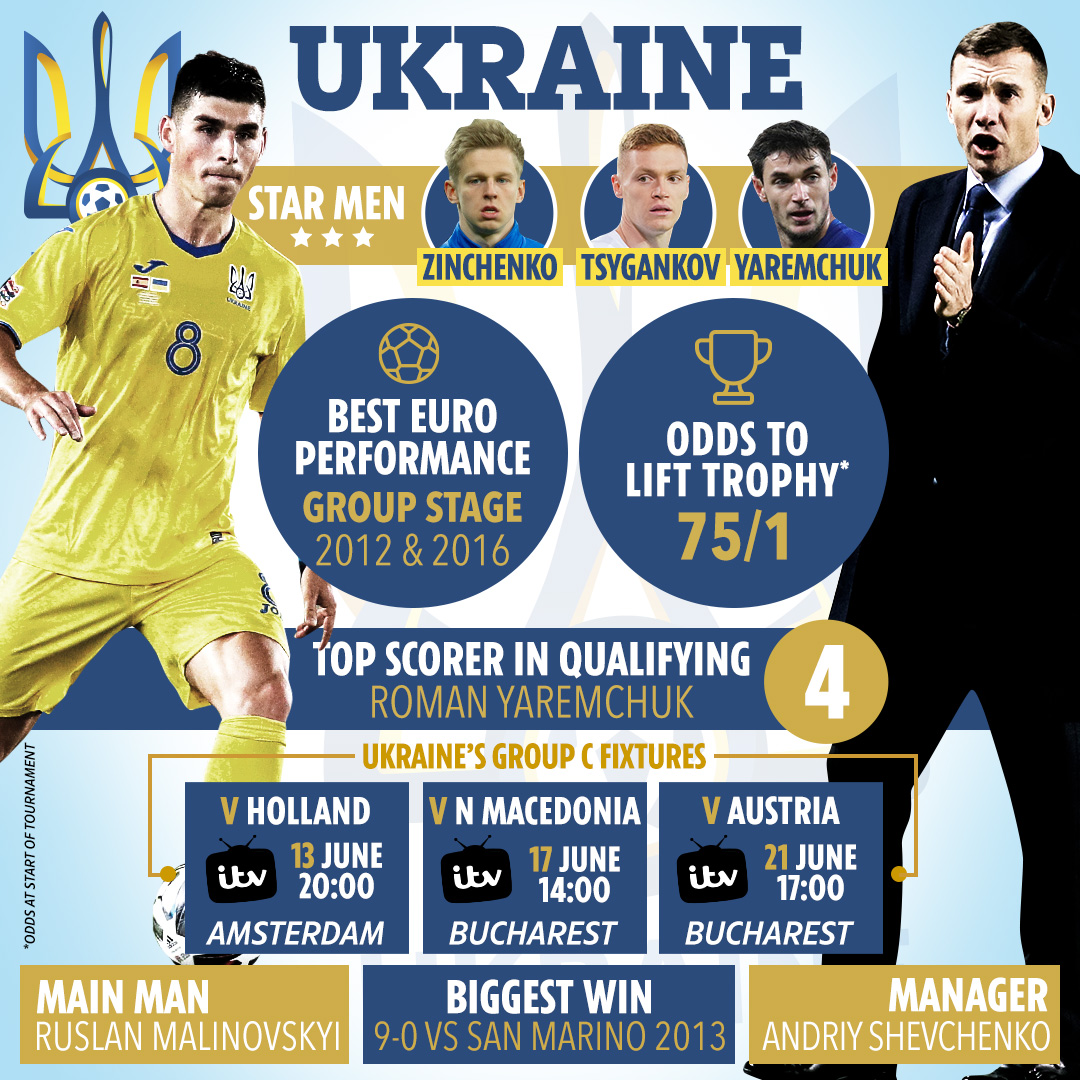 Ukraine eventually pulled it back to 2-2 through Roman Yaremchuk before Denzel Dumfires broke their hearts with an 85th minute winner for the Dutch.

The game was arguably the best of the tournament so far but some of the focus after was on the heart-warming moment seen in the stands.

Scott wrote: "The Dutch fan giving a thumbs-up, then a handshake and a ‘fair play, that was a belter’ to the celebrating Ukraine fan after the Yarmolenko goal is my tournament highlight so far."

Telibarb said: Warmed my cockles, it did."

Yaromolenko has struggled for game time at West Ham this season with injuries and the excellent form of the starting XI limiting him to just 15 Premier League appearances.

But he is a hero in his country for the 41 goals in 95 appearances he has managed for the national team. 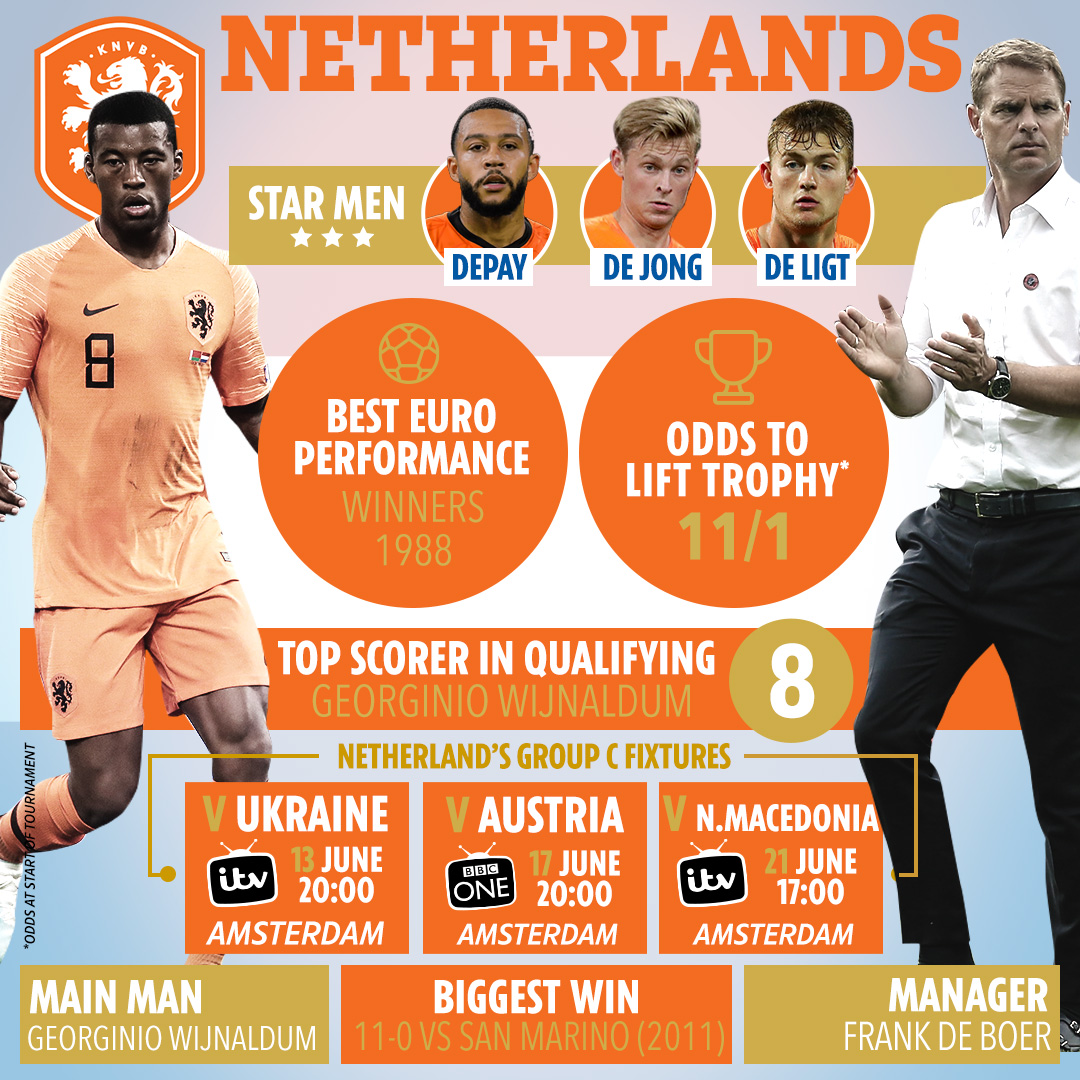