Alexander Volkanovski has become just the second Australian to clinch a UFC world championship after he sensationally defeated Max Holloway for the featherweight belt at UFC 245 in Las Vegas on Sunday.

Volkanovski follows in the footsteps of trailblazing countryman Robert Whittaker, who held the middleweight belt for almost two years before losing it to New Zealand’s Israel Adesanya in Melbourne in October. 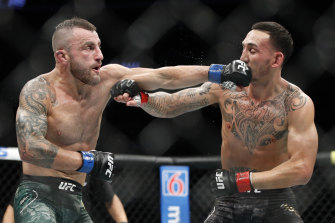 Australia’s Alexander Volkanovski (left) was a unanimous winner over Max Holloway on Sunday.Credit:AP

However, given Whittaker was born in New Zealand, Volkanovski not only becomes the first Australian-born UFC champion, but also the first Aussie to win a belt inside the octagon. Whittaker was upgraded to undisputed middleweight champion in late 2017 after Georges St-Pierre vacated his title.

Holloway is widely regarded as the greatest featherweight of all time, but Volkanovski, in the performance of his life in Sunday’s co-main event, executed a strategically brilliant fight to end Holloway’s 30-month reign as UFC featherweight champion, which included three title defences.

The fight went the full five rounds, but so impressive was Volkanovski’s performance that he won by unanimous decision 48-47, 48-47, 50-45.

Volkanovski focused on Holloway’s legs from the outset and unleashed a barrage of leg kicks which left the Hawaiian’s legs red and swollen and deprived him of one of his biggest weapons – his quick movement.

The leg-kick assault was so relentless that Volkanovski set a new featherweight record for leg kicks (46) with two rounds still remaining and finished with 75. 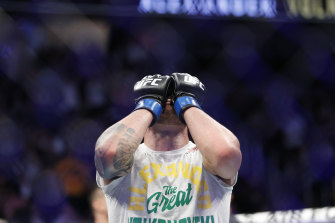 Volkanovski extended his winning streak to 18 fights with the stunning win.Credit:AP

Holloway still managed to cause plenty of damage with some beautiful combinations, as evidenced by the swelling the Australian experienced in his face, and even regained the ascendancy in the fourth round. But he couldn’t do enough to convince the judges.

Volkanovski (21-1) extended his winning streak to 18 fights, having tasted his only MMA defeat in May 2013, and, in doing so, brought Holloway’s 13-bout winning run in the featherweight division, which began in January 2014, to an end. Volkanovski remains undefeated in the UFC (8-0).

The fireworks weren’t restricted to the Volkanovski-Holloway showdown, though, with the highly-anticipated main event between Kamaru Usman and Colby Covington failing to disappoint.

One of the most spiteful wars of words the UFC has ever seen was finally decided inside the octagon and Usman, who took the welterweight belt off Tyron Woodley in March, showed that actions speak louder than words as he defended his title for the first time against trash-talking arch-nemesis Covington.

Eight of Usman’s previous nine fights went the distance while Covington’s previous fight bouts were also decided by the judges, and it looked as though this meeting would also go the full five rounds. However, Usman picked his moment late and ended one of the most spectacular and entertaining fights of 2019 with a double knockdown, before hammerfisting Covington relentlessly, forcing the referee to end the contest with 48 seconds remaining.

Covington finished the fight with blood pouring from his face, but to his credit, he appeared to have suffered a broken jaw in the third round and continued to fight it out courageously and ferociously in the final two rounds.

Usman’s (16-1) six-year winning streak has now stretched to 15 fights, including 10 in the UFC, while Covington (15-2) suffered his first defeat in four years.

In Sunday’s other title bout, two-division champion Amanda Nunes was tested but once again showed why she is the greatest women’s UFC fighter of all time as she defended her women’s bantamweight title for the fifth time against Germaine de Randamie.

Nunes, who is also the reigning UFC women’s featherweight champion, was taken the distance by the Dutchwoman, but her superior wrestling and grappling handed her a unanimous decision victory. She has now won her last 10 fights in a streak that dates back to March 2015.