Form is temporary. Class is permanent.

It's an axiom that is easy to forget in sport where fashion and recent performance often dominate the way people think about jockeys and older riders who have slipped down the pecking order can struggle to re-establish themselves. 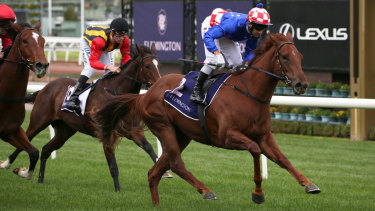 Racing home: Brett Prebble rides Moldova to victory in race one, the Jack Styring Plate, during the Living Legends Raceday at Flemington on Saturday.Credit:AAP

Damien Oliver reminded everyone just how good he was this weekend with his group 1 double in Adelaide, and Oliver aside, its hard to think of a senior rider who has been in hotter form in the past 48 hours than former Victorian champion jockey Brett Prebble, who won the Melbourne Cup aboard Green Moon for Lloyd Williams back in 2012.

Prebble rode a winner on Saturday at Flemington on Moldova for Danny O'Brien in the famous red white and blue silks made famous by Makybe Diva. That served as a reminder that he was still around and could do the job just as well as he did when he was winning Victorian titles and riding with great distinction in Hong Kong for several years. 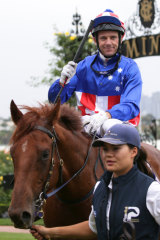 And he followed up at Bendigo on Sunday with a treble in the first three races, just to hammer home the message that if he was given the right horses to ride, he is the right man to have in the saddle.

These successes were a long way away from the group 1 events and big races that litter his curriculum vitae but illustrate that the hunger is still there for the 41-year-old rider.

It also illustrates the competitive depth of Victorian racing's jockey ranks as even the top men with impressive track records can take nothing for granted anymore and have to be prepared to ride at provincial and country tracks seven days a week if they want to maintain their position at the top of the tree.

*In the UK the first European classic race of the season, the English 2000 Guineas, was won for the tenth time by Irish maestro Aidan O'Brien, when his colt Magna Grecia, ridden by his son Donnacha, won the Newmarket showpiece.

The big field split into two groups down the straight mile and it was the trio on the stands rail who dominated, with Magna Grecia winning from 66/1 chance King of Change, with Skardu (15/2) third. Magna Grecia's stablemate Ten Sovereign, the 9/4 favourite, raced on the ''wrong'' side of the track and finished fifth.