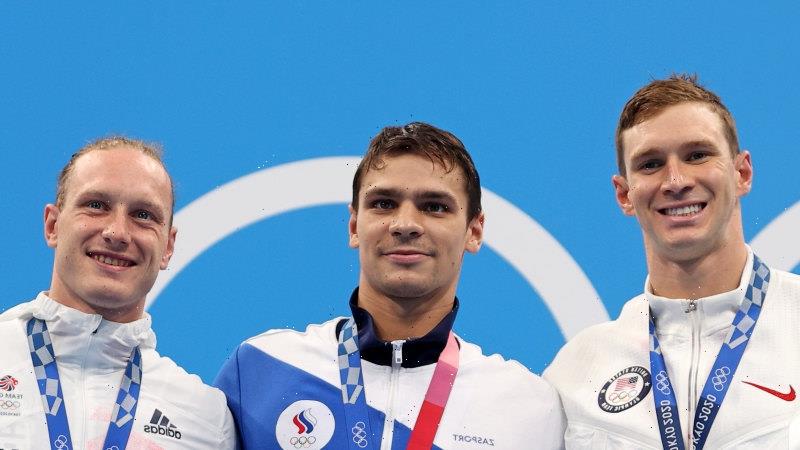 Tokyo: The International Olympic Committee’s accommodation of Russian athletes in Tokyo under an adopted acronym had until Friday made for a curious anomaly. It has now turn ugly, with a frustrated American swimmer questioning how any athlete can know their races are clean.

The team of the ROC, the Russian Olympic Committee, has 335 athletes at these Games. After American Ryan Murphy lost the second of his Olympic backstroke titles to one of them, Evgeny Rylov, he inferred to journalists that Rylov was a drug cheat.

“It is a huge mental drain on me to go throughout the year, that I am swimming in a race that’s probably not clean and that is what it is,” he said.

Murphy didn’t name Rylov, but he didn’t need to. 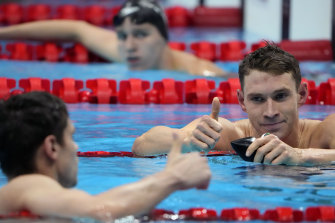 American swimmer Ryan Murphy gives a thumbs up to ROC’s Evgeny Rylov. Murphy later walked back his suggestion that their race wasn’t “clean”.Credit:AP

The reason that Russians are nominally swimming for their Olympic committee and not their country – the same the reason Rylov’s golden double in Tokyo was greeted with strains of Tchaikovsky’s Piano Concerto No 1 instead of the Russian national anthem – is that Russia is still considered unfit to be welcomed back to international competition after the revelations of its state-sponsored doping program.

The IOC accommodation is designed to punish Russia while allowing Russian athletes with no connection to their country’s doping regime to compete.

In comments made later at a press conference, Murphy referred directly to the Russian scandal. Rylov is the only Russian swimmer in Tokyo who has won a gold medal. If he was not talking about Rylov, then who? 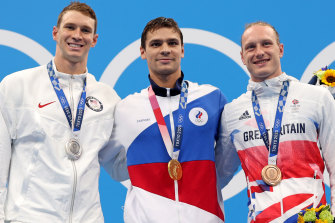 Britain’s Luke Greenbank, the bronze medallist in the race, added to swimming’s cold war. “It is frustrating knowing there is a state-sponsored doping scheme going on and more should be done to tackle that,” he said.

“It is obviously a very difficult situation not knowing whether the race is clean. I just have to keep my mind on my race and focus on what I can control.”

This left Rylov, a 25-year-old who, since emerging as a star of the 2014 Youth Olympics, has competed at three world champions, two European champions and now, two Olympics against Murphy, in the awkward position of having to defend himself against thinly veiled accusations of doping, in what should have been the finest moment of his career.

“Honestly I am not aware of these comments so cannot react to whatever he said,” Rylov said. “I have always been for clean competition. I am always tested and fill out of the forms so from the bottom of my heart I am clean. I have devoted my life to this sport.

“Ryan did not mention my name and did not accuse me of anything so I would rather not react to anything he said.

“I always do the doping tests … I would not be able to forgive myself if I had taken something. I don’t know how to react to this. I haven’t been accused of anything,” he said.

Murphy added that it was not his intention to make allegations and congratulated both Rylov and Greenbank on their races. By that stage, the mood at the Tokyo pool was already colder than a Moscow winter.

In response, the Russian Olympic Committee issued a statement that could have come straight from Nikita Khrushchev’s politburo.

“How unnerving our victories are for some of our colleagues,” a published translation of the statement read.

“Yes, we are here at the Olympics, whether someone likes it or not. The old barrel organ started the song about Russian doping again. English-language propaganda, oozing with verbal sweat in the Tokyo heat. Through the mouths of athletes offended by defeats.”

The episode has the potential to revive the bitterness of Rio, when Australia’s Mack Horton called China’s Sun Yang a drug cheat and American Lilly King pointed an accusing finger at her Russian rival, Yulia Efimova.

It will rankle Rylov that when Murphy broke world records in both the 100-metre and 200-metre backstroke events in Rio as part of a dominant American team, no one questioned whether the then, blisteringly fast, 21-year-old was clean.

It is only now, when Ryan is 26 and unable to match his times from five years ago, and Team USA without Michael Phelps has not matched its lofty expectations in Tokyo, that Ryan has raised concerns about his Russian rival.

Friday was the first time the US left the pool at the end of finals session without a gold medal. Team USA has won six gold medals in swimming at Tokyo, the same number as Australia.