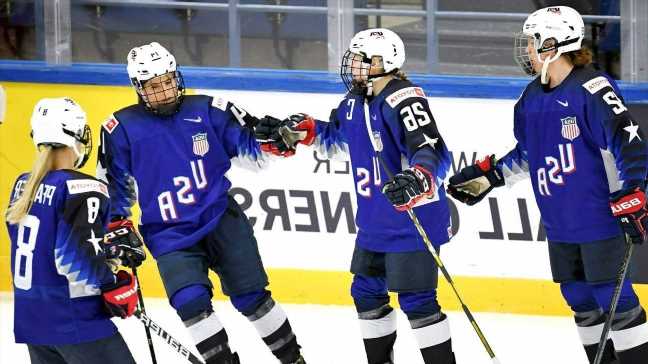 United States women’s hockey national team captain Kendall Coyne Schofield is tired of saying it “and even more exhausted from feeling it,” but “women’s hockey, once again, deserves better.”

“This is our Stanley Cup,” Coyne Schofield told ESPN on Friday. “Can you imagine getting to the Stanley Cup Final, and before getting on the plane, [someone] saying, ‘You know what, it’s canceled, and we don’t know when or if it can even happen’? It’s devastating. … I almost hope young girls aren’t seeing this because I don’t want them to feel this. It’s extremely challenging to keep going, to keep fighting, to keep pushing, but the reason we do is so they don’t have to experience this one day. It’s exhausting, it really is. It’s difficult in this situation knowing the outcome could have been different if decisions were made earlier.”

The call to cancel was made by the government in Nova Scotia just one day before participating countries were set to arrive for the tournament, which featured strict COVID-19 protocols, including an eight-day quarantine. Nova Scotia cited 25 new COVID-19 cases in the province on Wednesday, which brought the active caseload to 79.

Both American and Canadian players learned the news when they were on the ice at pretournament camps in their respective countries.

“When you see tears streaming down your teammates’ eyes, your coaches’ eyes, your general managers’ eyes, you know how much work everyone put into getting into this moment,” Coyne Schofield said. “And we got to that moment successfully; there were no positive cases. We held up our end of the bargain; we did everything that was asked of us.”

According to sources, two teams, Japan in Russia, were already en route to Canada on charter flights.

Sources say some American locations, such as Texas, could step up to host a rescheduled tournament, but since Hockey Canada was officially awarded the job of host, organizers will look to find a solution in Canada first.

“We all had been training so hard for two years now for this opportunity,” Canadian defenseman Renata Fast told ESPN. “We thought there was no chance it could be canceled. We had all done our seven days of isolation before we got to Nova Scotia. Then we were tested every day. For it to be robbed for us, the day before other teams fly in, it was just like, why? There was anger and frustration; why is this happening to us again? And there were no answers for us.”

The national team players in Canada and the U.S. do not play in the NWHL, as they are part of the Professional Women’s Hockey Players Association — a group that is holding out and fighting for a North American professional league that can pay players a living wage. Nurse pointed out that events like the world championship are “really all we have.”

“When things like this happen, cancellations happen, brands, investors, partners look at it and say, ‘How can we invest in women’s sports when it’s never seen? How are we getting a return on investment?'” Canadian forward Sarah Nurse told ESPN. “Last year, I had a situation where I wasn’t paid my sponsorship deal because the world championships were canceled. They saw it as me not holding up my end of the agreement. It’s something that’s very unfortunate but probably happens more than you think in women’s sports.”

Added Coyne Schofield: “A lot of sponsors do look to the women’s world championships as the opportunity for their brands to be supported by the athletes. So when the world championships don’t go on, the brands don’t get the support from their athletes that they expected to, these brands start to look in different directions — because there is not much programming in women’s hockey.”

With this cancelation, there has not been a senior women’s international event in 740 days. There has, however, been programming on the men’s side, including the World Juniors U20 men’s tournament in Edmonton in December 2020. The U18 boys tournament is scheduled to take place later this month in Texas — an event USA Hockey moved from Michigan months in advance, knowing the way Michigan’s governmental restrictions were trending.

“We’ve had conversations with Hockey Canada about the gender thing, and it’s hard not to view it through that lens,” Nurse said. “As a woman, seeing all of these men’s tournaments go on, seeing at the [boys] World Juniors, how they were able to pivot after a positive test and still be able to put it on, it’s frustrating. Because you wonder, would this have happened to a men’s tournament? I totally understand that we can’t compare it to the U18s that’s happening in Texas, or the men’s tournament that’s going to happen in Latvia, because they are different governments, different situations. But it’s very difficult not to think, if this was a men’s tournament, would they have done more?”

In a letter addressed to “the women’s hockey family” on Friday, IIHF president Rene Fasel was defensive about the lack of contingency plan.

“Aside from the fact that up until Wednesday the IIHF had no reason to believe that the province of Nova Scotia would cancel the tournament in Halifax and Truro based on the ongoing discussions and tournament preparation, the logistics of keeping a venue as a ‘backup’ is not a workable solution,” Fasel wrote in the letter, obtained by ESPN. “For instance, keeping spare hotels for exclusive use for the event booked, staff and two arenas that are up to the IIHF standard of a ten-team World Championship event — in an entirely different province or country in case of a cancellation in the main host region — is just not possible from an expense and logistical perspective.”

Fasel added that COVID-19 precautions “necessitate significant coordination” with regional and national governments due to travel bans and immigration restrictions in place.

That explanation didn’t really satisfy the players. “I don’t know how the conversation didn’t happen: if Nova Scotia’s numbers increased, what would happen?” Fast said. “Hockey Canada was in Nova Scotia in March for a selection camp, and the province went into mini-lockdown when we were there — in a bubble, at that point — and we were told we couldn’t scrimmage anymore. It affected us. So I feel like that was a red flag right there.”

In a social media post, Coyne Schofield said the lack of answers “shows the lack of care that the IIHF had when it came to making sure the Women’s Worlds was successful like the other international hockey events we have so joyfully watched this year and will be watching very soon. Those tournaments had contingency plans and plans to pivot the location if the dialogue between the tournament and local health officials couldn’t be mutually agreed upon.”

Coyne Schofield noted the amount of money every country spent in preparation for the tournament, including booking flights, pre-tournament camps, and ultimately re-booking flights.

“Everyone’s situation is different, but we were committed to taking 31 days off from whatever we were doing,” Coyne Schofield said. “There are a lot of players, they don’t make any money doing this. They were taking time away from their jobs, their families, their kids. And now the unknown — you might have to do this again, in the near future, with no clarity on the time and commitment of when it will happen. Next month? Two months? Ever? That’s so challenging for women’s players, that a lot of people don’t understand the complexities of.”

Fast said Hockey Canada told its players to take some time off upon returning home, unsure of when the tournament will be held.

“We all need a break, just seeing how hard and how long we’ve been training for the last two years,” Fast said. “Emotionally, mentally, physically we need a break. It’s draining to think of how the year was, tip toeing around protocols to keep ourselves safe, it took a lot of us.”

Said Nurse: “I’m going to take the next few days just for myself, because I realized I’ve put in a lot of hard work, and so have my teammates. As we look to move forward, again with the uncertainty, we’re going to get back to training, because ultimately we have to be ready when we are given the green light again. Women hockey players’ are a resilient group. Unfortunately we’ve become used to having to overcome adversity.”