TOTTENHAM face a manic start to the season with a 3,000-mile round trip to Bulgaria later this month.

Jose Mourinho's men risk major burnout if they defeat Lokomotiv Plovdiv in the second round of Europa League qualifying. 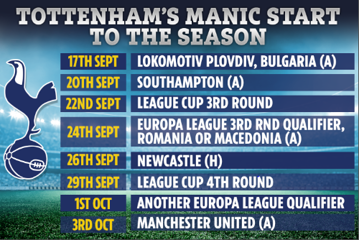 The trip to Eastern Europe comes just four days after they kick-start their Premier League campaign against Everton at home on September 13.

Yet progress in the Europa League will mean Spurs are facing a potential fixture pile-up with as many as nine games in 24 days.

Three days after the September 17 tie against Plovdiv, the club are due to travel away to Southampton.

The north Londoners could then be sent anywhere from north England to Wales on September 22 for the Carabao Cup third round.

Spurs embarrassingly crashed out of the competition on penalties to Colchester last year under Mauricio Pochettino.

Mourinho was explicitly hired as his replacement to bag the club silverware meaning they can ill-afford to not take the domestic cups seriously.

But just two days later Spurs will be jetting off for another 2,000-plus mile return trip for an away clash against either Romania's Botosani or Macedonian club Shkendija.

September 26 will see the likes of Harry Kane play host to Newcastle before a potential League Cup fourth-round match on September 29.

Mourinho, who won the Europa League with Manchester United in 2017, will then have to oversee another play-off in October to even qualify for the competition's group stage.

Then the Special One returns to Old Trafford for a match against the Red Devils themselves on October 3.

The 2020/21 season was already going to prove difficult to manage due to the knock-on effect of the coronavirus pandemic.

And now Spurs will face the prospect of two games across the same midweek in successive weeks should they progress in all competitions.