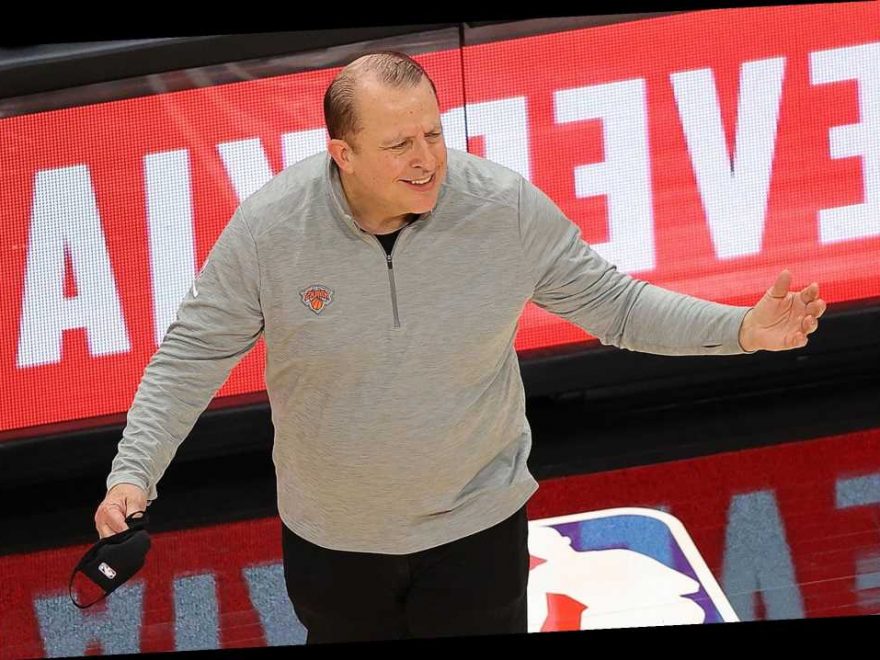 Knicks giving fan base a reason to hope

No Knicks boos makes for sobering night at Garden

Empty Garden could be Knicks advantage this season

The Knicks faced their Western Conference counterparts in the no-name Thunder on Friday at the World’s Most Empty Arena.

A funny thing happened on the way to another Knicks lottery trip. Tom Thibodeau’s team is off to the franchise’s best eight-game start since 2012-13 — the last time James Dolan’s club made the playoffs.

Thibodeau and his defense, which is seventh in the NBA in defensive efficiency, have gotten most of the credit. ESPN’s new outspoken broadcasting star and former Thunder center Kendrick Perkins, however, touted the Knicks’ new offense, also constructed by Thibodeau.

Thibodeau is finally seeing the light on that end of the court, Perkins contended. Perkins was the Celtics’ center for three seasons when Thibodeau was Doc Rivers’ assistant coach in Boston.

“In the time he was off in his two years, he reevaluated himself and he came back a different coach,’’ Perkins said on “The Jump” on Thursday. “Because some of the plays that they’re making and some of the freedom that they have on the offensive end — I never saw a Tom Thibodeau team have so much freedom. But I love it.”

Yes, the Knicks are playing at a faster pace, are hitting 3-pointers with a higher efficiency and moving the ball better than they did under Jeff Hornacek, David Fizdale and Mike Miller.

But as far as X’s and O’s and more freedom? They are still ranked 28th in scoring average (104 ppg).

The real uptick is players stepping up in the clutch (hello Austin Rivers) — not Thibodeau’s genius offense.

“I still see pretty vanilla on that end,’’ said former Wizards, Hawks and Raptors scout Bryan Oringher, who wove a two-part scouting review of the Knicks’ offense and defense Thursday on his YouTube channel. “But they’re definitely defending.’’

Indeed, Knicks center Mitchell Robinson doesn’t see much change regarding offensive schematics from one year to the next.

In the first eight games, Thibodeau has stuck with the same starting five — all returning players, including Robinson.

“That’s a good question,’’ Robinson said after shootaround Friday, when asked the difference between this season’s offense and last season’s. “I feel like it ain’t really different. We’re just getting tired of the seasons that we’re having. It’s about time for us to step our game up. We just came in with a different mindset and went at it.’’

He’s a different player after his extended boot-camp offseason in Dallas — even if some deep analytics don’t show his impact as much as the naked eye does. (He’s only ranked 51st in the all-inclusive player efficiency rankings. So much for analytics.)

Randle is defending and tearing it up offensively, with All-Star numbers of 23.1 points, 12 rebounds and 7.4 assists. He also has played the second-most minutes in the NBA.

Oringher still isn’t certain if this Randle is the “fluky’’ version or the new Randle going forward, saying the southpaw from Texas is playing “out of his freaking mind.’’

In the comeback win over the Jazz on Wednesday, Randle busted out in the second half, piling up 30 points on Rudy Gobert.

“Rudy Gobert has won Defensive Player of the Year awards and Julius didn’t give a s–t,’’ Oringher said on video. “He just went right through Rudy — ‘You’re too small to guard me.’

RJ Barrett was so sick of losing his rookie year, he doesn’t care who gets credit for the 5-3 start. Barrett wasn’t specific on the any fresh offensive machinations used by Thibodeau but said: “I’ll say whatever coach Thibs is doing offensively, defensively, is working so far. [We’re] really trying to have an emphasis on playing together, everybody moving and sharing the ball.’’

Don’t get me wrong, the Knicks got a steal in Thibodeau — and got lucky other would-be suitors were embroiled in the NBA’s bubble restart while the Knicks were eliminated. But let’s give more kudos to guys like returning starting point guard Elfrid Payton, who, as Oringher states, “is the master of the 8-foot shot.’’

And Reggie Bullock, who is healthy again and draining 3-pointers and hustling for loose balls. And Barrett, who still isn’t hitting 3s, but is doing everything else, making a mockery of exclusion from the two All-Rookie teams.

As for the new additions, Austin Rivers has been Austin Powers. Immanuel Quickley quickly became the steal of the draft, to date. And when he gets healthy, sweet-shooting Alec Burks will continue to turn the Knicks into a decent 3-point shooting ballclub.

Thibodeau has shown a knack for sticking with the right players in the fourth quarter — a cardinal sin of Fizdale’s.

But let’s also be real. The players — especially the returnees — are making Thibodeau look good, too.