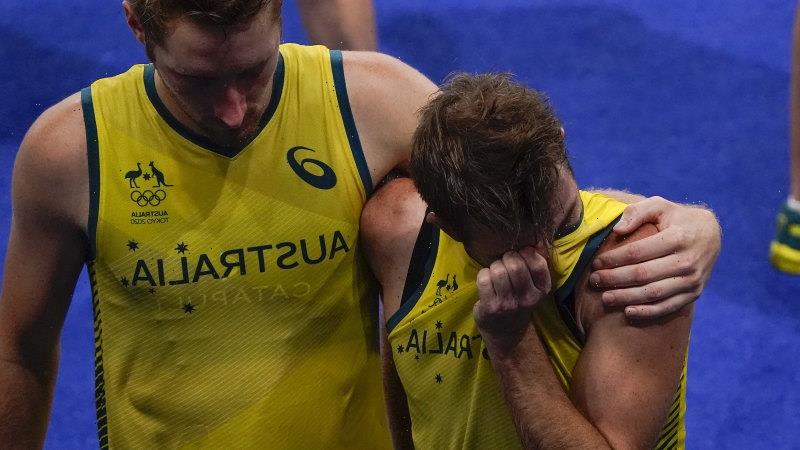 Billions of bilious blue blistering barnacles! Belgium’s favourite cultural export, the nervous Captain Haddock of the Tintin series, could never have survived the tension of the men’s Olympic hockey final.

The Red Lions, the best team in the world since the Rio Olympics, added a gold medal to their World Cup, European and FIH Pro League titles after a dramatic 1-1 draw with Australia was resolved by an even more dramatic penalty shootout. A video referral prolonged the suspense, before Jake Whetton’s second attempt at his penalty stroke was denied by goalkeeper Vincent Vanasch and Belgium were finally able to celebrate. 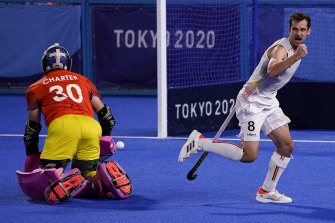 Florent van Aubel celebrates after scoring in the shootout.Credit:AP

“Jake won’t be alone tonight,” Australia’s goalkeeper Andrew Charter said. “He’s the guy who’s in the moment but … it’s a collective effort from all of us and we all feel the pain together. We’ll get around Jake and hold him strong and get through this.”

Australia, resilient and skilful against their more-fancied opponents, having come from behind to level the match, received a standing ovation from their large contingent of Olympic team admirers. The silver medal was their best Olympic result since 2004 in Athens.

This golden generation of Belgian hockey players always appeared confident they would secure their country’s fourth medal of the Games. Before the match, Belgium clearly won in “The Voice” department with a lusty rendition of their national anthem. They were also very purposeful in the obligatory pre-match huddle. These teams had not played often, but in Sydney a year ago Belgium asserted themselves with a 4-2 win over Australia.

For the first half, Belgium did not quite dominate the match but looked more likely to score. Charter was forced to save five field-goal shots in all, and two penalty corners from the prodigious Alex Hendrickx went just wide to the right. 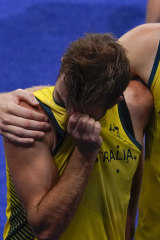 Jacob Whetton is comforted by a teammate after missing the last shot of the penalty shootout.Credit:AP

A Belgian counter is usually something across which you might order beer or hot chips. On this night, the Belgian counter was equally world-class, a constant threat. It was no surprise when, moments after half-time, an interception and then some tight passing put Florent van Aubel in front of goal to finish the movement.

Belgium had been playing so well to that point, it was going to be daunting for Australia to equalise. But either the Belgians tightened up when they went in front, or the Australians were galvanised by the need to score.

In the next period Australia gained confidence and played their best hockey of the night. Tom Wickham had a shot blocked, and a good run and shot from Whetton drew Australia’s first and only penalty corner. The shot from Jeremy Hayward was kept out by goalkeeper Vanasch’s big right foot. Two minutes into the last quarter, the ever-scheming Aran Zalewski pressed, his deflected shot popped up, and Wickham tapped it in to draw level.

A penalty shootout might be a cruel way to settle the matter. High jumpers, in these circumstances, just decide to share the gold medal. It was not to be.

Coach Colin Batch said he still favoured the penalty shootout as a resolution for a drawn match.

“You need a winner,” he said. “They used to play extra time, and for an Olympic final that should still be in place. But it seems I’m a lone soldier there. The shootout adds a different element of the game and gets it over and done with.”

It might be unfair to name those who missed, but for the record, Blake Govers went right and was blocked by Vanasch; Flynn Ogilvie and Tim Brand scored for Australia, but Belgium held the advantage until their captain Felix Denayer lost possession of the ball. Australia did not score again, as first Josh Simmonds and then Whetton missed out. Whetton’s video referral showed that Vanasch’s stick had touched his foot, but on his retake, Whetton was denied by the goalkeeper.

Belgium, who had beaten Spain and India to confirm their top seeding, have added an Olympic to their world and European titles. But 10,000 thundering typhoons, it was a close-run thing.

Never miss a medal or great sporting moment with our Olympic update emailed daily. Sign up for our Sport newsletter here