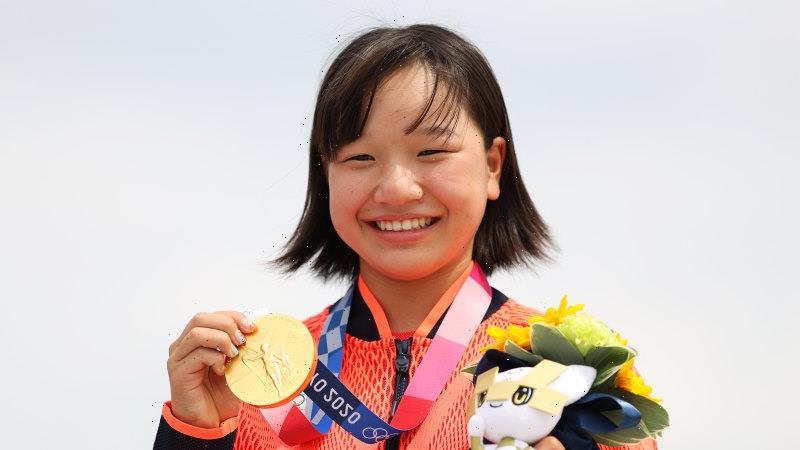 Tokyo: They are just kids. On Monday, one of them became the youngest individual Olympic gold medallist in more than 80 years. 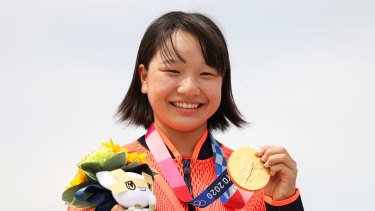 To do it she beat fellow 13-year-old Rayssa Leal from Brazil and her Japanese compatriot, Funa Nakayama, 16, in heat so hot it turned laptops off. Together they made the youngest podium in history.

Each of them was fearless. Pounding the pavement, run after run, they hit the concrete hard on more than one occasion. They fist-bumped between kick-flips and cheered when another landed after getting some air.

When Momiji skates she soars. Down ramps, off-ramps, the board glued to her feet. After seven rounds, her date with glory came down to the final trick. When the pressure rose so did she.

Charging towards the left-hand rail she leapt her own height, locked the board onto the rail, backwards, and landed like she would at her local skate park.

Momiji must have practised the high-stakes manoeuvre thousands of times in her short life, but here, at her home Olympics, all of the bruises and sprains paid off. They won her gold.

Momiji will now vault into that exclusive Japanese gold medal club. At 13 years and 330 days old she is the youngest individual Olympic gold medallist in 85 years. US diver Marjorie Gestring was 13 years and 268 days old when she won gold in 1936.

In that same club, she will meet Yuto Horigome, Japan’s men’s street skateboarder who took out gold on Sunday. Japan has gone two from two when the country, torn between a pandemic and the most expensive Olympics in history, has needed it most. 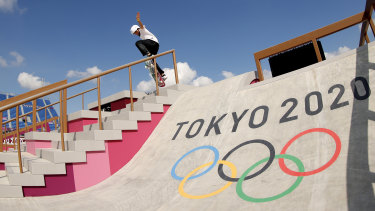 “I did my best and I gained a gold medal,” the teenager said as she faced a 100-strong press pack on Monday in Tokyo. Clapped in and out of the media room, the trio had translators in their ears as their parents watched on.

Asked if they thought when they were younger that girls could not skateboard, they laughed. “I think they can of course,” said Momiji. “I’m sure they can skateboard.”

Australia’s Hayley Wilson was eliminated ahead of the final, finishing 16th after a solid start turned into a frustrating morning of missed landings. The 19-year-old, who left school to focus on qualifying for the Olympics, dominated in one of her runs, scoring the second-highest score of the heat but could not sustain her form in the tricks section. 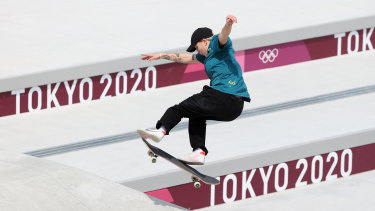 Australia’s Hayley Wilson was knocked out during heat two on day three of the Tokyo Olympics.Credit:Getty Images

Part of the challenge of street skating is that you are only ever one trick away from a face plant. This was a young, nimble sport on debut at the Olympic and it showed.

The oldest competitor US skater Alexis Sablone did well to make the final. She is 34, more than double the winners ages. As she recovered from a couple of nasty falls after the heats, other skaters were FaceTiming parents and friends at home.

Momiji is now set to become a skateboarding icon and a figurehead for Japanese women’s sport. 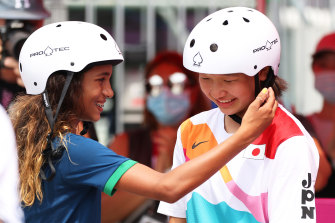 Japan has struggled to shake entrenched gender roles, where women are expected to focus on study to get into university and then later raise a family. Sport, particularly the elite kind, has historically been seen as a distraction for women in this country of 126 million.

Only 27 per cent of female high school students play sport, the Japanese government’s white paper on gender equity found in 2018. There are only 48 female soccer teams across the country’s 10,324 middle schools. Just 10 per cent of its Olympics coaches are women and only 11 per cent of the country’s sports executives.

Asked if this was a turning point, Momiji was philosophical. “Today it so happens that we won,” she said. “I don’t know if that means Japan is strong.”

Her victory, along with the bronze for Nakayama and the gold for Horigome on Monday, is all the more remarkable because of Japan’s reluctance to embrace skating at all. It is rare to see groups of kids skating down the street in Tokyo, Kyoto or Osaka.

Everything in Japan has its place, a skateboard’s is not on the street. They are prohibited in most public places and youth’s brandishing boards are regularly stopped by police.

Skaters, like the duo atop the dais on Monday in Tokyo, are relegated to the concrete bowls of the suburbs.

“I hope that we will see many more parks to practise in Japan,” said Nakayama.

If anything is going to turbocharge the push to make skating mainstream in Japan it is the sight of these two, high-fiving above the ramp and giggling on the podium.

But first, Momiji said, she will hang her gold medal in her family living room.