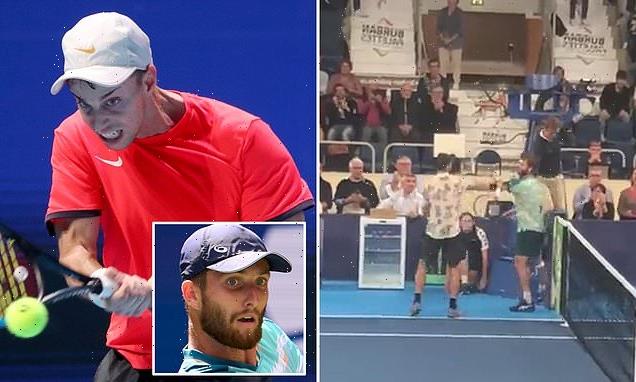 Tensions boil over at Challenger tennis event in France as Corentin Moutet and Adrian Andreev BARGE and SHOVE each other and have to be split up by the umpire in front of shocked crowd, after Bulgarian allegedly said ‘f*** you’ to the Frenchman

Seldom considered one of the more confrontational sports, tennis players Adrian Andreev and Corentin Moutet appeared to let the mask slip as they almost came to blows at the Open d’Orleans in France on Thursday.

The Bulgarian Andreev, ranked 247th in the world, beat France native Moutet, ranked 64th, 2-6 7-6 7-6 before the two players had to be split by the umpire at the conclusion of the match.

In footage filmed from the stands at the conclusion of the event, both players approached and reached the net in the traditionally good natured way that is expected of tennis stars.

However, it is when the players began to get close to each other that the traditional well-mannered embrace was not going to play out in the manner that tennis authorities or supporters wished it to.

As Andreev and Moutet went into embrace, they both gripped each other slightly too tightly which lead to them shoulder-barging one another. As they continued to grip each others hands as they moved along the net towards the umpire’s chair, the two players exchanged words.

Moutet in an interview following his defeat told the press that he had been told ‘f*** you’ on two occasions by the Bulgarian Andreev. It is not clear if one of these instances took place at the net. 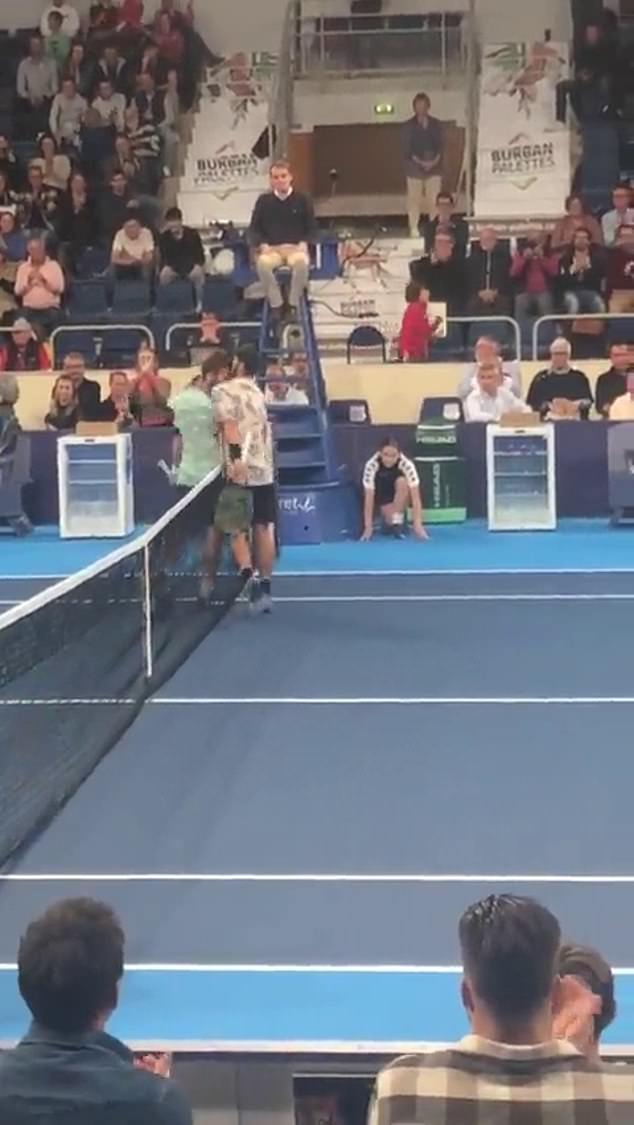 For a few seconds thereafter the incident appeared like it could boil over with both players raising their arms at one another.

Andreev continued to say things to Moutet which the Frenchman took issue with as he shoved his opponent once more. With neither player appearing willing to back down, the umpire was forced to intervene as he split the two before the incident grew anymore serious.

Posting on social media after his defeat, Moutet bemoaned the behaviour of his opponent throughout the match, saying that he was ‘threatened’ by Andreev. 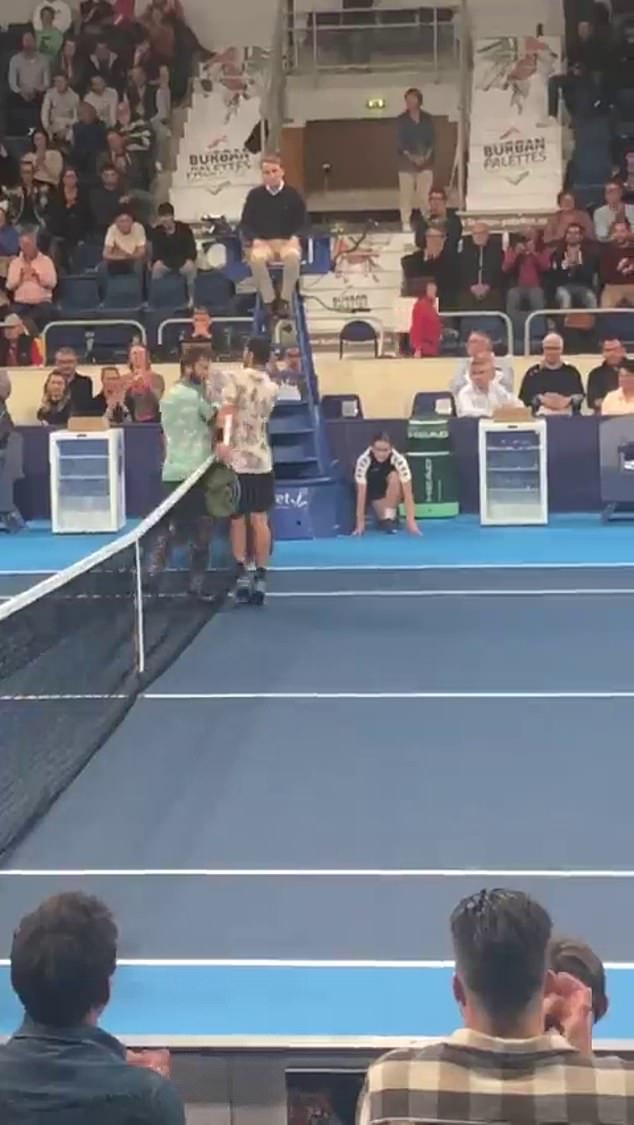 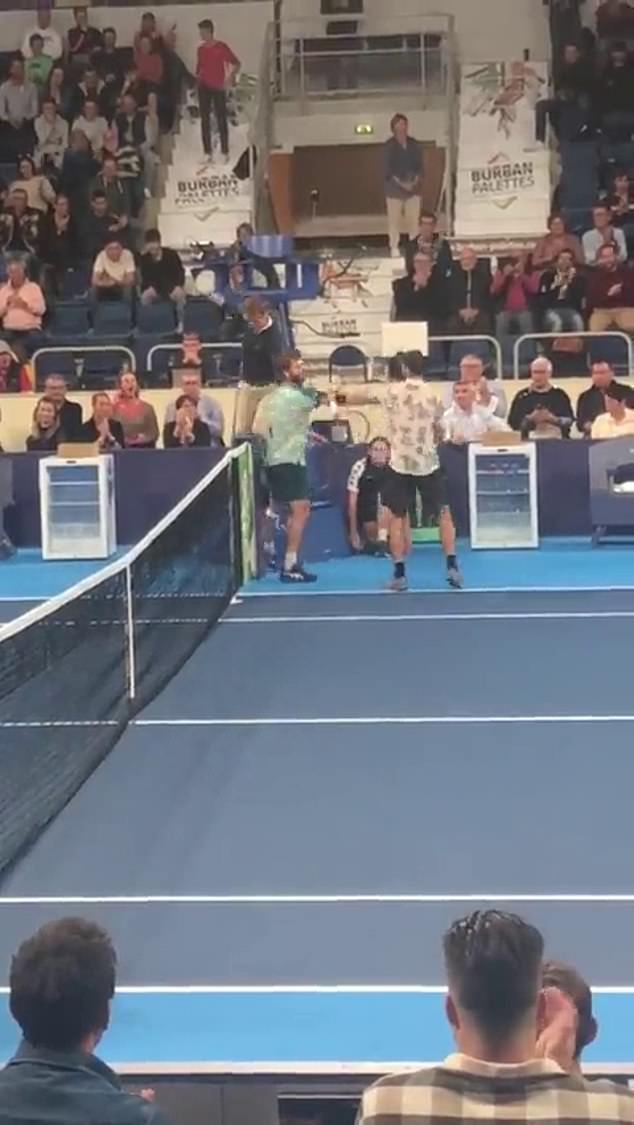 ‘I don’t want to apologise for what happened late in the game,’ the world No.64 wrote.

‘When a player allows himself to say ‘f*** you’ twice while looking me in the eye, I can’t help but make him understand in my own way that these are not things that are done.

‘He threatened me and asked me to wait for him at the exit of the court … something I did of course I have trouble finding him for 10 minutes. 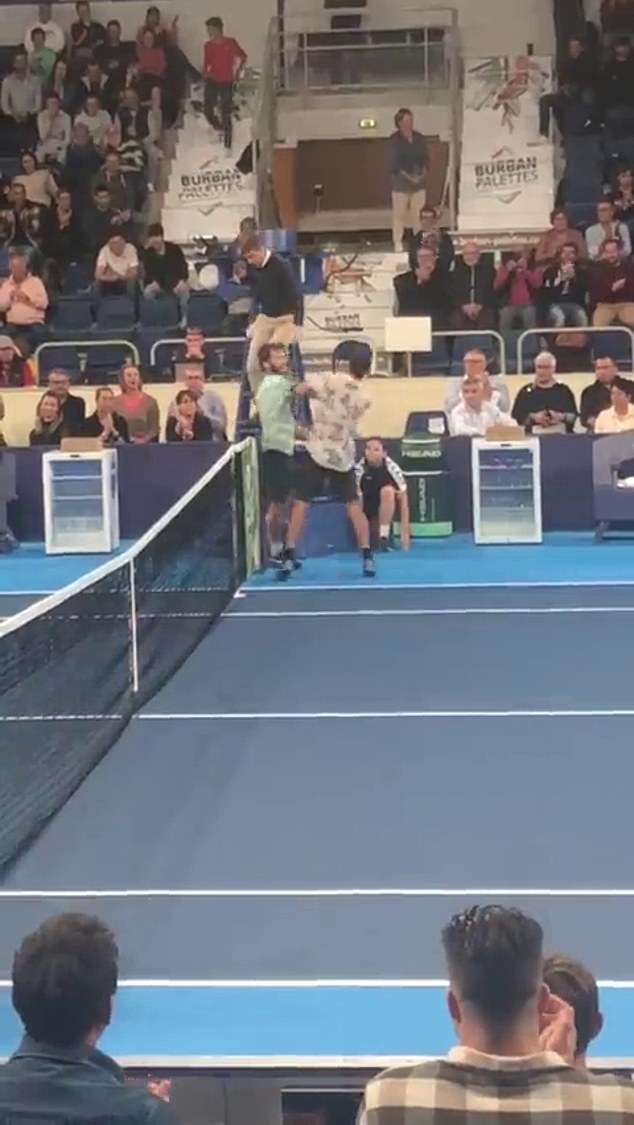 ‘Indeed he was hidden on the other side behind 6 security people.’

‘I heard your threats so when you get out of the room they hid you in I will be very happy to see you carry them out,’ he added. ‘So I’m waiting for you impatiently, we can talk calmly.’

Moutet, who was seeded first for the tournament after receiving a wildcard, apologised to the organisers for his early exit.

‘I did my best, I would have liked to go further to honour it better,’ he said. ‘I’m sorry for it.’ 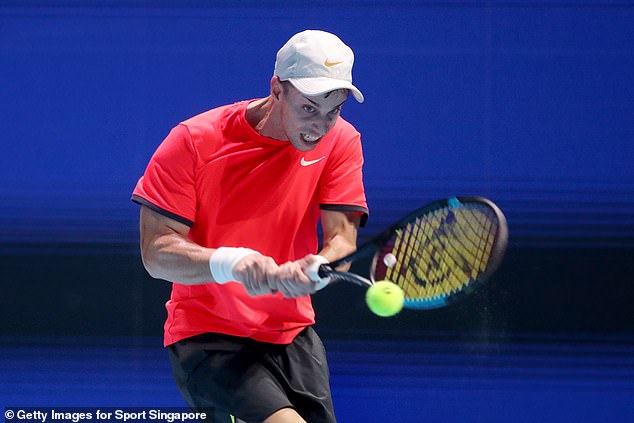 Andreev, ranked 247th in the world, emerged victorious after dumping out the tournament’s no.1 seed 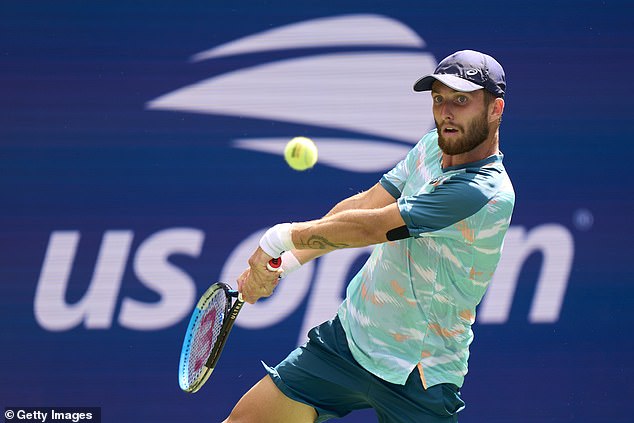 Moutet, ranked 64 in the world and photographed competing in round four of the US Open this year, apologised to the event organisers for his exit