As director of netball, head coach and athlete at Surrey Storm, Mikki Austin knows how to spin multiple plates and handle the majority of situations. However, 2020 presented challenges and circumstances that even Austin had not seen before.

Here, the 27-year-old opens up about the past 12 months and shares what it’s been like to lead a Vitality Netball Superleague franchise during such abnormal times.

“When you think back to January 2020, it feels like a very long time ago, doesn’t it? Back then, we were in the middle of a normal pre-season and it was all systems go leading up to the 2020 Vitality Netball Superleague season,” she told Sky Sports.

“As a squad, we were feeling good. We felt like we were as ready as we could be, and we just needed to start running out against external opposition.”

A little earlier on in their pre-season, the British Fast5 Netball All-Stars Championship had seen Austin’s Storm grab other franchises’ attention with their slick work.

The fact that Austin had put a real focus on retention, and then introduced key new players, made for a productive and happy camp. Needless to say, no one could have foreseen what was creeping up on the horizon. 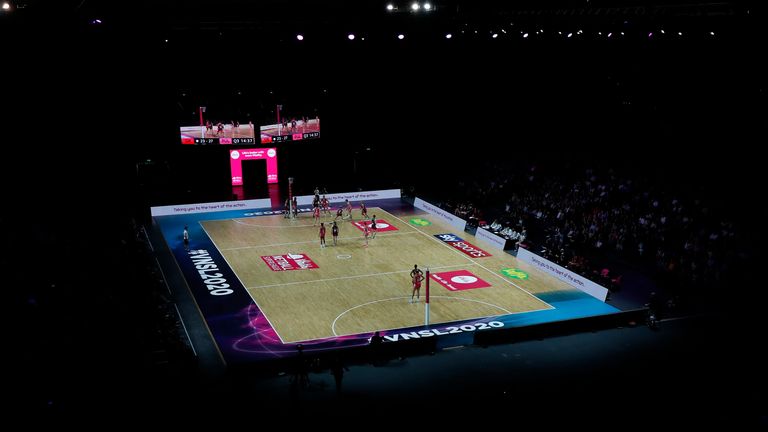 As February dawned, the Superleague enjoyed an outstanding Season Opener at Arena Birmingham. The event secured a record crowd for a one-day netball event in England and signalled the sport’s continued rise to prominence.

Just before the final match Whitney Houston was played and the whole arena was on their feet, nearly seven hours after the beginning of the first match. The energy was amazing.

“I have to say it’s always chaotic but it’s a great day and we found ourselves in the middle of one of the most competitive games of the day.

Determination in spades from @SurreyStorm as they managed to claw it back and edge-out @Celtic_Dragons.

“The event really made a statement about how the league wanted to use the momentum of the Netball World Cup to sharpen the focus on the domestic game. It felt like a real marker for the sport. It was a pivotal moment.”

After the Season Opener, the momentum continued with high-class matches and coverage being devoured up by fans.

Storm’s round-two encounter with London Pulse, which was live on Sky Sports, had fans across the country enraptured and the 51-50 contest provided another signal that the 2020 season was going to fly.

“We play sport to be in moments like that, when it’s all on the line and the pressure is on,” Austin said. “The game was so topsy-turvy. If you were a neutral, you would have loved it!”

At that point, Storm and the rest of the franchises were ticking along with their matches nicely. Austin and her side were able to travel to Sirens for round three before COVID-19 reared its head, and the complexion of the league (and country) changed significantly.

On Sunday March 14, Storm were due to host Manchester Thunder at Surrey Sports Park. For all involved, it was a time of uncertainty.

Two days prior to the match, the Prime Minister had announced that sporting events could still take place as normal. As a result, Severn Stars and Wasps Netball faced off in Worcester and Storm focused on hosting the reigning champs.

“At that point, COVID-19 was becoming a very real situation. I remember having a lot of conversations and asking so many questions, including ‘are we safe to host this match?’ 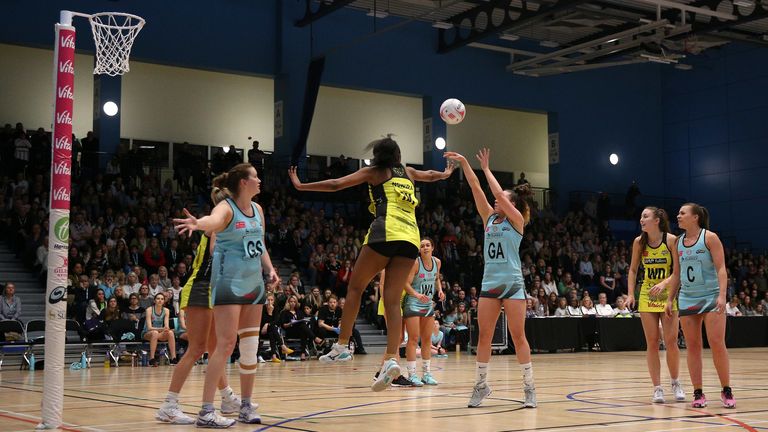 “We were so conscious that it was a home game, with fans coming and that Thunder were travelling four hours to get to us. We have a duty of care to everyone.

“On the Thursday, I’d said to the team that we needed to prepare for the match, but I said to them that, in all honesty, I had no idea if it was going to go ahead or not.

“We all didn’t know how quickly everything would escalate – the full-country lockdown arrived just two days later – and I believe it was that evening or the day after, when the league said that no other games would be going ahead.

“I have to admit, I remember feeling quite dejected and a little bit frustrated that we’d gone through everything only for a decision to have been made really soon after and not before.”

The longest time period without netball since I began playing the sport, but 100% the right call IMO. here’s to making the 2021 season the best product possible and the longest pre season known to man 😂👊🏻💙 https://t.co/yVs1nOidxy

In her role as director of netball, Austin also remembers feeling a huge responsibility to her players. In those first few days, and throughout the year since, she’s wanted them to know everything that she did, so that they had the chance to come to her with any concerns.

Netball-wise, Austin instantly set about trying to put a plan in place and gain an understanding of each player’s personal circumstances.

Did they have space they could use for training but more importantly, what was their life situation like? Were they on their own? Did they have family around them? Were they in a high-risk household?

Your netball family, you spend more time with them in a regular week than you spend with anyone else. In season, you are everything to each other, so to go from that to nothing, felt really strange and very unfamiliar.

“Very early on, we put together a schedule including individual and team catch-ups. We chose not to train as a squad online and instead trusted individuals to do it in their own time.

“I also became quiz master on a Friday and hosted a quiz for everyone involved in our franchise and their families. I think I did that for 11 weeks and have some wicked playlists now because of the music rounds!”

All of those elements enabled Storm to stay connected and as many directors of sport and head coaches will say, managing a team as well as your own emotions takes a lot of energy.

“I’ll be really honest; it was really difficult at times. I’m the one who is meant to have all of the answers… I’m the one who sets the game plan, dictates the pace, effort and energy. All of those things come from me, so not being able to give players the answers they needed was tough.

“It was much more than just, are we playing a match or not? It was about people’s lives, for example import players wondering if they should stay in the country or try and get home?

“It was really difficult not having the answers to some of those questions. Everyone was dealing in such a level of unknown, human nature says that you want to know what’s around the corner or have an idea anyway. Not being able to put peoples’ minds at ease was so hard.”

As a person, Austin thrives off routine and structure. Alongside supporting others, she was having to deal with her own way of life being thrown up into the air. The fact that netball wasn’t there, prompted her to question her own identity.

“There were all sorts of questions which came up in my mind, questions which I don’t think I’ve ever faced before… and that took a couple of weeks of me to sit with and figure out,” she said openly.

Like many others, Austin leant on physical activity to help process everything. Also, she became kinder to herself and didn’t focus too heavily on all of the different social media posts from people proclaiming to be enjoying the most productive time ever.

“One of the things that’s stayed with me now, is allowing yourself to think and feel exactly how you do in a particular moment, and being okay with it.”

Rest assured, when we are able, and it’s safe to do so, we’ll be better than ever! #StormingInto2021 https://t.co/2RVxeSN9sp

The process of being furloughed was another tricky time for Austin however, she understood the business reasons for it and trusted those who were representing Storm in all of the conversations around netball’s return.

“I’m a bit of a control freak,” she said with a smile. “I’m used to just taking everything on my shoulders because I wear so many different hats, so to sit back and not have any input or control was very difficult.”

Austin’s eagerly awaited return from furlough arrived on her 27th birthday and she moved to a flexi-furlough basis as Superleague’s signing window opened.

From there, it was all systems go with regard to forming a squad for the 2021 season, thinking about the league’s restart, training, venues and organising potential pre-season fixtures… you name it, Austin has been thinking about it.

“The best way to describe it is using the duck analogy, you’re looking beautifully serene on top but underneath you’ve got legs which are franticly paddling away to keep you afloat!”

In speaking about all of the challenges with regard to netball’s pause, Austin wants to make it very clear that she has an enormous amount of compassion for the challenges so many have faced as a result of COVID-19.

“It’s been the most difficult year of my career. I wouldn’t want to do it again in a hurry. However, everything needs to be put into context,” she said matter of factly.

“Although we feel pretty hard done by [in not having a season], in the grand scheme of the wider world, we have no idea about the despair and heartbreak that as gone on in so many different households, families, communities and countries.

“It’s trying to balance out how disappointed you feel about the sport that we love and that forms such a huge part of our lives being paused, with the perspective of the wider situation.

“There have been so many tragedies this year with families who have lost loved ones and relatives and that’s still going on every day. So, as difficult as it is, because we haven’t been able to play our sport, there are so many people across the board who have it so much worse.”