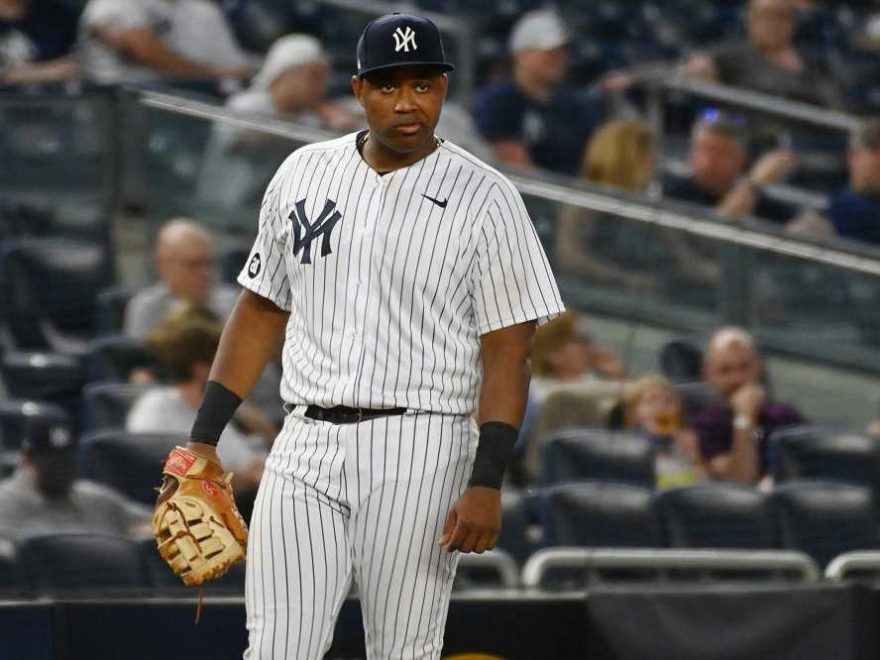 Aaron Boone’s Yankees can play like they’re managing themselves

Vulgar sports fans are only following many players' example

Popeye put it best: “I can read reading, but I can’t read writing. This writing is wrote rotten, if you happen to ask me.”

Warning: The following could cause mental duress and emotional strain among the intelligent. Viewer indiscretion is advised.

Last Saturday, Chris Gittens made his MLB debut, called up by the Yankees.

The next night on ESPN’s annually insufferable “Sunday Night Baseball,” Gittens came to bat in the third inning against the Red Sox, having struck out in the first. He was accompanied by a graphic that read:

“What a career!” wrote reader Alex Garrett, who included the screenshot.

But this has long been ESPN’s grasp of the sports it televises, and what it provides us to read and consider as enlightenment.

It doesn’t care about significant context nor how often it embarrasses itself, thus Bobby Thomson’s “Shot Heard ’Round the World” won for the Giants “the 1951 NLCS,” which, like ESPN, didn’t exist.

MLB Network, primarily owned by MLB, now scrolls graphics giving the day’s schedule, plus additional info about each game, specifically the betting lines. The shamelessness of such a steady sell by MLB and its corporate betting partners, eager to create more sucker gamblers, thus increasing its cut of fans’ losses, is sickening.

NBC has been informed that a significant graphic it posts has appeared backward, causing confusion throughout its Stanley Cup coverage. If, say, the Islanders are on a power play against the Bruins, the Bruins’ logo appears alongside the PP clock, indicating that they, and not the Islanders, have the manpower advantage.

But NBC doesn’t care. It’s sticking with its stupidity. To fix it — easily done — would make it easier on viewers, not to mention would make sense, but it might indicate that NBC had it wrong from the start, which it did and has. So we remain stubbornly tethered to stupid.

Continuing Eduacation: Last Sunday, here, I poked at YES’s Michael Kay and John Flaherty for claiming that the Rays’ Kevin Kiermaier should have been ruled out for slightly leaving the first base line to avoid first baseman DJ LeMahieu’s tag. In return, I received a bunch of emails, some from those claiming to have been umpires, that I was dead wrong.

Knowing that there is no hard, fast first base path, I refused to budge. Besides, I’m tired of writing corrections! Then reader Marv Resnick sent an overview of the play as it appeared in an umpires’ site, CloseCallSports:

“Unfortunately, the rule about a base path has nothing to do with either of those concepts, meaning all within earshot tuned to YES were witness to misinformation regarding the out and the base path rule.

“Official Rule 5.09(b)(1) governs this play and states, ‘Any runner is out when they run more than three feet away from their base path to avoid being tagged unless their action is to avoid interference with a fielder fielding a batted ball. A runner’s base path is established when the tag attempt occurs and is a straight line from the runner to the base they are attempting to reach safely.’

“In other words, runners set their own base paths and are allowed three feet to the left or right of that established position on their way to the next (or previous) base in order to avoid a tag.

“Not the Rule: The 45-foot runner’s lane painted on the ground to the right of the foul line is rules-relevant for one and only one play: runner’s lane interference, which occurs when a batter-runner outside of the lane interferes with the fielder taking the throw at first base.

“If there is no throw (or no fielder taking a throw), there can be no runner’s lane interference, meaning the lane line is immaterial during a tag play …

“Analysis: Porter’s only consideration was whether Kiermaier deviated by more than three feet, pursuant to avoid being tagged. Umpire Porter could use the three-foot wide yardstick known as the runner’s lane to help guide him to determine what three feet might actually look like, but the runner’s lane itself is meaningless for this play.”

Reader Rod Riviello writes that when he’s listening to Yankees games on the radio, a Yankees runner on first none or one out, “I have to ask myself if the batter coming up usually runs hard to avoid a double play. What a shame.”

Let’s get it straight. The NCAA’s College Football Playoff committee’s decision to try to increase the number of teams from four to 12 has nothing to do with establishing fair play for teams that arguably deserved inclusion.

Rather, it has everything to do with sustaining or increasing TV revenue, especially restoring the TV value of historically attractive bowl games left diminished by a four-team playoff.

As always, follow the TV money. When President Trump last year gave himself full credit for rescuing Big Ten football from COVID-19 cancellation, he was self-deluded. Millions in TV dollars money surpassed all considerations of canceling the conference season due to COVID-19.

Nurses! A Reds-Cardinals telecast recently carried by MLB Network included this stat: At the end of May this season, there were 100 more entries on the MLB injury list than at the same time in 2019, the last full season.

Look who’s talking: Given that the Reds’ Joey Votto, never has been publicly sanctioned by MLB for a career of publicly cursing out everyone and everything (in his latest last week, he called Cards’ fans “s–t-talking motherf–kers”), Rob Manfred’s office must regard his enthusiasm as good for The Game.

Reader Mike Ganis of Houston: “Being a Lakers’ fan, I can’t wait until the team hoists its 2021 Western Conference Play-In Championship banner next season.”

According to unreliable sources, MLB and the MLBPA will no longer refer to pitchers using “illegal substances” but “undocumented substances.”

A playoff game in New Jersey last week was won after a kid from Gloucester Catholic High, Brayden Foster, swinging and missing as the presumed final out, ran to first, reaching safely, as that “last” pitch was in the dirt. From there, after Brayden had done what MLB players can’t be bothered to do, Gloucester rallied to win.