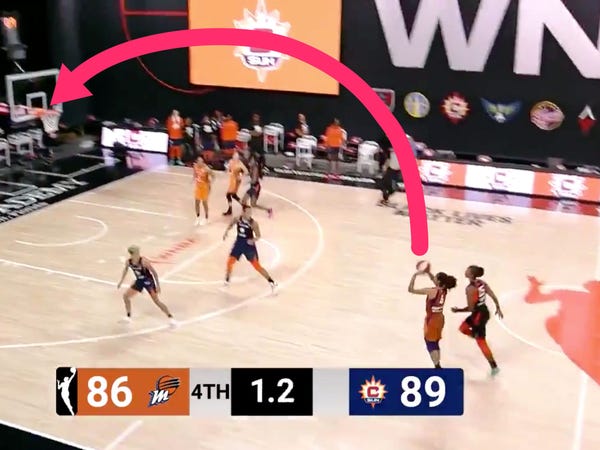 Skylar Diggins-Smith has ice in her veins.

The prolific point guard drained a mind-boggling buzzer-beater from the WNBA logo to send her Phoenix Mercury squad into overtime against the Connecticut Sun.

Here's another look at the shot — this time from the baseline:

The 45-foot shot came after Connecticut star DeWanna Bonner knocked down a clutch three of her own to give the Sun a late-game lead, but Diggins-Smith was quick enough to bring the ball up the floor and sink the long-range shot in just 3.4 seconds.

"It was terrible time-management by me, actually," Diggins-Smith told media after the game. "We had the ball. We had a steal with like 17 seconds in and I went way too early. I left [Bonner] time."

"Me and Kia [Vaughn] made eye contact and I was like 'I'm gonna banana cut,'" she added. "The lane was open. I knew I needed a three and I just put it up. There was no reason to celebrate because that just got us another five minutes."

The shot gave Diggins-Smith 31 points on the night, marking her second 30-point performance in her last three games.

She finished the night with a season-high 33 points and six assists, leading Phoenix to a hard-fought 100-95 win just a week removed from the WNBA playoffs.

Diggins-Smith and company currently sit at fifth place in the league, and while they've already punched their ticket to the playoffs for the eighth-consecutive season, the Mercury will continue fighting for higher seeding through the end of their regular-season schedule.

The league's top four teams receive a double-bye once the postseason arrives, which is valuable not just because it provides added rest time for players, but also because it allows teams to avoid the single-elimination games of the first and second rounds of the playoff.

Thanks to Diggins-Smith's game-tying shot Wednesday night, Phoenix is much closer to securing that highly-coveted No. 4 seed. The Mercury are current half a game behind the Minnesota Lynx in the standings. With just one game remaining on its schedule, Phoenix could find its way into the fourth seed just before the playoffs begin.

Diggins-Smith, Diana Taurasi, and the rest of their Mercury squad will look to secure that elusive double-bye against the league-leading Seattle Storm in their final contest of the regular season Friday at 10 p.m.