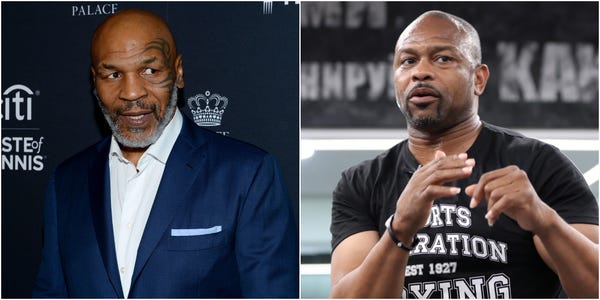 Roy Jones Jr. says Mike Tyson could still "cause a problem" in boxing's heavyweight division because of his crazy punching power.

Jones, 51, and Tyson, 54, are both coming out of retirement to go head-to-head in an eight-round exhibition fight for charity in California on November 28.

Iron Mike has "one thing most of them [current heavyweights] don't have, except Deontay Wilder, which is tremendous punching power," Jones, who has previously admitted he may have made a mistake by agreeing to fight Tyson, told Fight Hub TV.

"Anytime you got tremendous punching power like Mike got, he got a chance. Because he can, in most of the fights, win under three rounds.

"So it's like most of these guys, all he gotta do is get to their chin and he got them."

Jones added: "I believe if he got himself in shape and took care of himself for like a six-month period, he definitely could cause a problem in the heavyweight division."

Jones isn't the only man who believes Tyson could still stir up the heavyweight division.

Iron Mike's trainer, Rafael Cordeiro, who has been working with the 54-year-old for up to eight hours a day ahead of his bout with Jones, says Tyson is currently in the best shape of his career and could compete with Wilder, Anthony Joshua, and Tyson Fury.

"Everything he had in the past, he does better than before," said Cordeiro, adding: "If he put his mind [to it and] wanna fight for the belt one day, why not? Who says it's impossible to do?

"He's fighting every single day in the gym and I believe the best still to come. Why not? If one day he wants to prove, he put his techniques to the test, why not [fight for] the belt?"

Towards the end of his career Tyson suffered a series of embarassing defeats, losing three of his final five bouts. Tyson's last professional bout was in 2005 losing to Kevin McBride, bringing an end to a career with a record of 50 wins and six defeats.