Rugby league hero Steve Roach and boxing great Jeff Fenech have spoken out about the forgetfulness and personal struggles they have faced after years of head knocks and concussions in their sporting careers.

In an interview with the pair, which was filmed as part of a Macquarie University research project into the impact of repeated concussion in sport, Roach said he was in denial for a "long, long time" about how the head knock had affected him over the years. 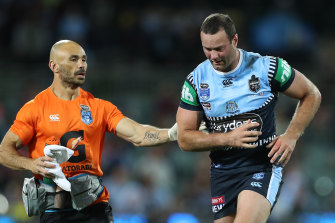 Boyd Cordner is assisted off Adelaide Oval for a head injury assessment by Roosters and Blues trainer Travis Touma.Credit:Getty

Cordner, who has a history of head knocks, ruled himself out of the remainder of the series last Friday after conferring with those close to him.

"I was so similar. I didn't care so long as we won … I fought with broken hands … and that's crazy," Fenech said. "My message is that we've got to think of the health of safety of our athletes before winning, we all do."

Like Roach, the 54-year-old said he also has struggled with forgetfulness which is why he joined the program. 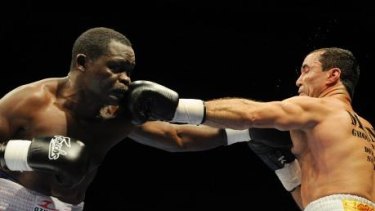 Classic fight: Azumah Nelson and Jeff Fenech slug it out in 2008.Credit:Sebastian Costanzo

"My question to anybody now, is that I understand we need to win, but think – what if that was your son and your or daughter out there?" Fenech said.

"We need to start looking after our sons and daughters."

Another person involved in the program was 40-year-old rugby union player Michael Lipman, who played 10 Tests for England and a couple of seasons with the Melbourne Rebels in the Super Rugby.

Lipman and his wife joined the program after noticing he had become more forgetful, moody, and angry.

After undergoing a number of cognitive tests as part of the program, Lipman was getting scores equal to mild dementia.

Lipman hopes to be a beacon to athletes playing today and said watching Cordner play on in last week's Origin was "very, very hard to watch".

"I'm 40 and I would hate for him to go through the things we are going through," he said. "We know the repercussions."

Dr Rowena Mobbs of Macquarie University, who is guiding the program, is calling on the NRL to change introduce a repetitive head injury assessment of players who suffer knocks.

"We need to ask the question in our athletes, are they at risk?" she said. "The fundamental is we love our sports. This is our national fabric. These are our national hero. We need to look after our top players."