Netball Australia has launched an official bid to have the sport included in the Brisbane 2032 Olympics after receiving official backing from governing body World Netball.

Netball has been part of the Commonwealth Games program since 1988 and the Australian national team, the Diamonds, are currently ranked No.1 in the world.

The fact the sport is predominantly played by Commonwealth nations, along with the IOC’s insistence on gender balance in its Olympic program, are set to be the biggest obstacles to netball’s inclusion.

But Netball Australia chief executive Kelly Ryan is adamant the number of both men and women playing the sport globally makes the proposal timely.

“Naturally we think we start from a really compelling base with 20 million playing it across 80 countries,” Ryan said. “It starts us in a really good position.” 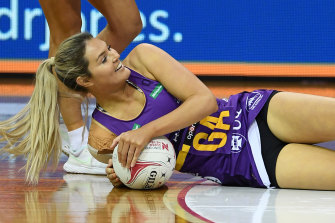 Gretel Bueta has done more than enough to warrant selection for the Diamonds.Credit:Getty Images

Men’s netball has come a long way in recent years but will its progression will need to be fast-tracked to satisfy the IOC.

The 2027 Netball World Cup in 2027, set to be held in Australia, could provide an opportunity to showcase the strength of the men’s game.

“Those conversations absolutely start as early as today for us to understand what our commitment needs to be to make sure netball is represented on the Olympic stage,” Kelly said.

Diamonds star Gretel Bueta said she is asked every time the Olympics roll around when the netball is on. Bueta said she hoped to see China, the US and Russia get involved in the game over the next ten years to add strength to the sport’s Olympic bid.

“People already think we are in the Olympics,” she said. “So for it to be actually included would be unreal.”

Diamonds coach Stacey Marinkovich, who named her 2021-22 national squad on Sunday, said netball’s inclusion in the Olympics for the first time on Australian soil would be fitting.

“We’ve grown the sport. Australia has been a leader in that,” she said. “We’ve grown the sport internationally and to be able to put our hand up and say our sport is to be a point it can be on the world stage in that environment is just a phenomenal recognition of what so many people have done before us.”

Amy Parmenter and Sunday Aryang are key additions to Marinkovich’s Diamonds line-up, with the Constellation Cup on the horizon in October. Former Diamonds captain Caitlin Bassett was also named in the squad despite playing limited minutes in the 2020 Cup.

Marinkovich said that while Bassett was suffering from “niggles” to her knee she had been impressed with her performance in New Zealand’s ANZ competition.

Adopting a rotating captaincy for the 2020 Constellation Cup, Marinkovich said she would be naming a sole captain shortly who would also take the side into the 2022 Commonwealth Games.

“It will be a named captain,” she confirmed on Monday.