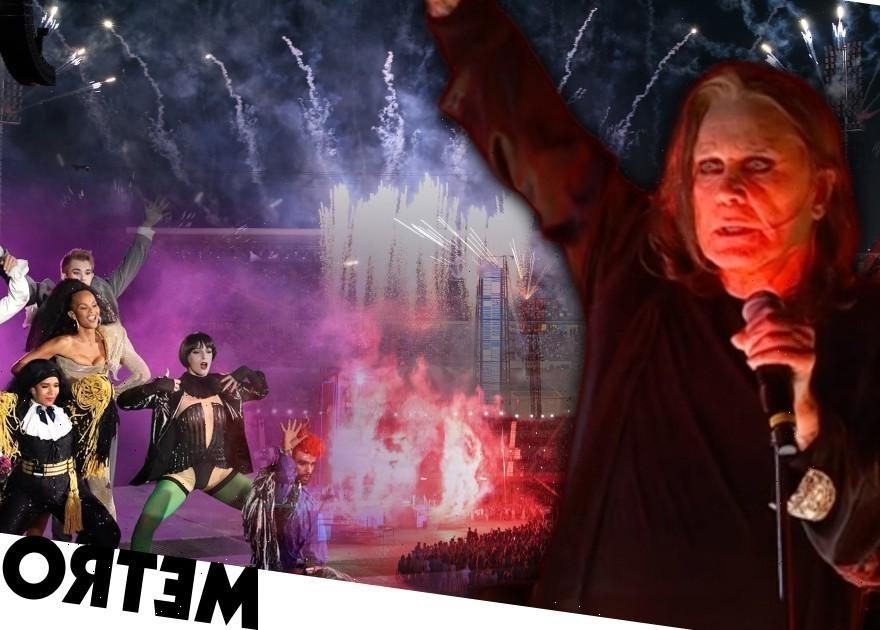 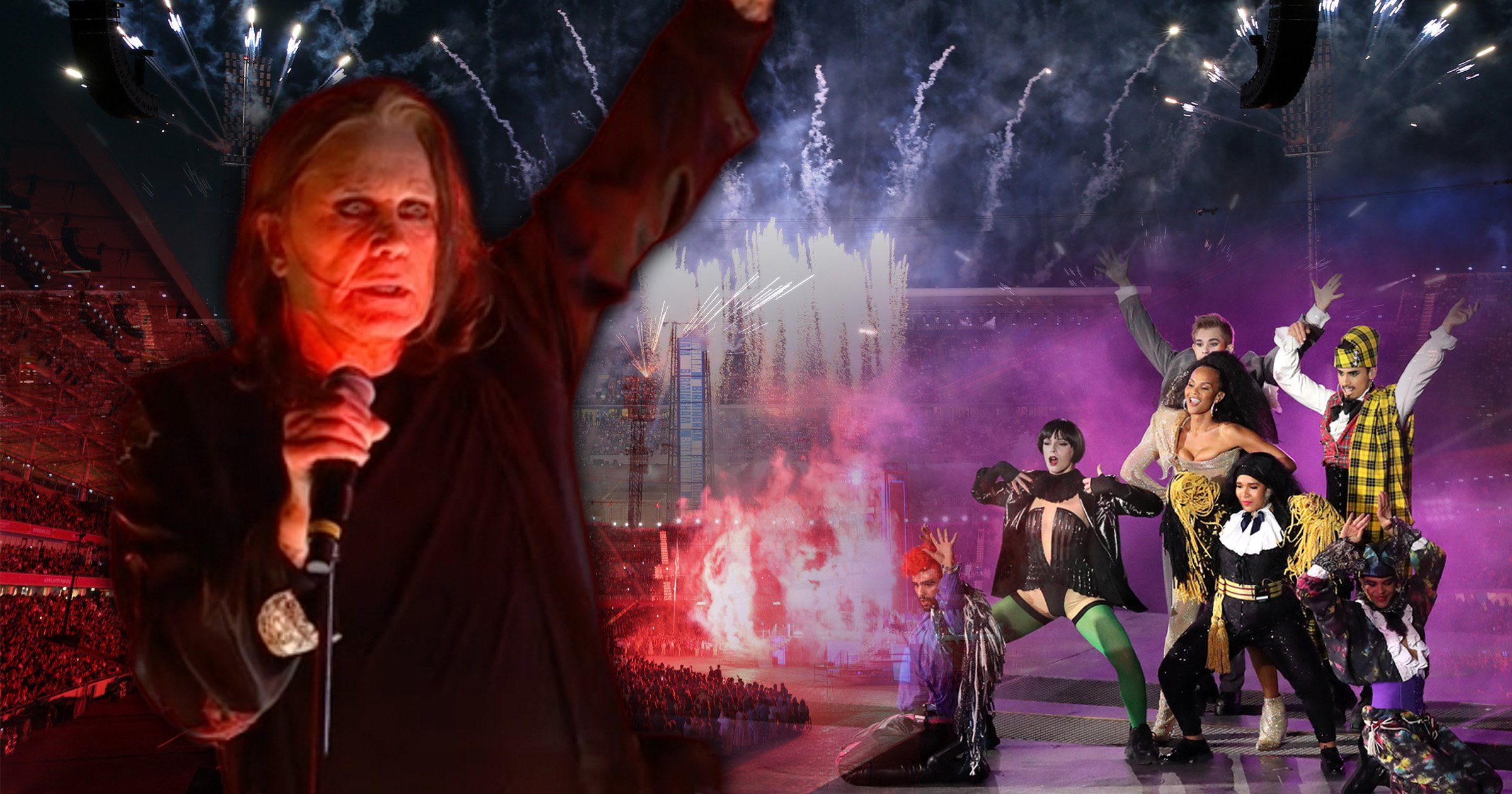 This was the biggest games in history with over 5000 athletes from 72 nations competing across 20 different sports.

Birmingham have done a fine job as only the third English host of the Commonwealth Games, especially considering they were a late-ish replacement for original hosts Durban after the South African city was forced to pull out due to financial issues.

A dramatic and musical finale

According to creative duo Amber Rimell and Bronski – aka Tawbox – Monday evening’s ceremony was designed to ‘celebrate the people, culture, and the sound of Birmingham, through the medium of musical performances and choreography.’

They added: ‘The show captures a poignant moment that reflects on Birmingham’s rich and diverse culture that makes this city so unique.

‘Pre-set in 1950s post-war Birmingham, the show consists of real stories from real people who together made this city the thriving post-industrial heart of the UK.’

The dramatic show – which will have drawn plenty of comparisons with the London 2012 opening ceremony – was accompanied by some of Birmingham and the Midlands’ best music exports, from Dexys Midnight Runners to UB40, while there was even a nod to Peaky Blinders.

The Earl of Wessex paid tribute to Birmingham for showcasing ‘the spirit and values of the Commonwealth’, while a special guest appearance at the Alexander Stadium was teased throughout the evening and did not disappoint.

In an explosion of fireworks and pyrotechnics, Birmingham’s very own Prince of Darkness, Ozzy Osbourne, emerged from the smoke to blast out a collection of his biggest hits before bringing the Commonwealth Games to a close with a cry of, ‘Birmingham forever!’

Now, with the Games over, Metro Sport has taken a look at the winners, losers, and biggest talking points of the last 12 days…

How did the home nations get on?

Unlike the Olympics, each of the four nations of the UK compete separately at the Commonwealth Games, and all will leave Birmingham with mixed feelings.

England claimed a record-breaking 176 medals (57 gold, 66 silver and 53 bronze), but it was not enough to beat Australia in the medal table, and they also fell agonisingly short of surpassing their record of 58 golds that was set at Glasgow 2014.

The aquatics centre was the scene of many of these medals with 17-year-old Andrea Spendolini-Sirieix, the daughter of TV star Fred Sirieix, claiming two golds and a bronze in the Diving.

There was also much success in the Gymnastics, with both the men and women winning the team all-round events, while Jake Jarman won four golds in total.

Scotland fell just short of beating their record medal haul from Glasgow eight years ago, but with 13 gold, 11 silver and 27 bronze medals this is still their second-most successful games ever.

As expected, Athletics stars Laura Muir and Eilish McColgan delivered the medals (four to be precise) including golds in the 1500m and 10,000m.

Boxing proved to be their most successful sport, with Sam Hickey, Sean Lazzerini, and Reese Lynch all emerging victorious in their respective weight classes and all within the space of a few hours.

And a special mention has to go to 75-year-old George Miller, whose triumph in the B2/B3 mixed pairs Lawn Bowls made him the oldest medallist in Commonwealth history.

Wales could not repeat their heroics from the Gold Coast in 2018, but still came away with a respectable eight gold, six silver and 14 bronze medals.

It was in the Para-events where they particularly excelled, James Ball notably picking up a gold and silver in the tandem cycling.

Athletics stars Olivia Breen and Aled Davies and Table Tennis ace Joshua Stacey were also among the gold medalists, but there was disappointment for former Tour de France winner Geraint Thomas who could only claim one Bronze medal (in the time trial) at what will be the Welsh hero’s last Commonwealth Games.

Northern Ireland, meanwhile, endured their most successful Commonwealth Games ever, with their seven gold, seven silver and four bronze medals breaking the record for most gold medals and most medals won at the Games.

Swimmer Bethany Firth and the Lawn Bowls Men’s fours team claimed the other two gold medals at a Games the country will never forget.

Where did the other medals go?

Australia topped the medal table, the eighth time they have done so in the last nine Games, pipping England to the top spot with 67 gold, 57 silver and 54 bronze medals.

This sets the Wallabies up well for the next Commonwealth Games in 2026 which are due to be held Down Under in the State of Victoria, the first time the Games will not be held in a singular city.

Canada, India and New Zealand also finished inside the top five of the medals table, while Nigeria and South Africa help round out the rest of the top 10 alongside the other home nations.

Meanwhile, Guernsey claimed their first medal in 28 years courtesy of Lucy Beere’s silver in the Lawn Bowls, before the Channel Island also won their first ever Athletics medal thanks to Alastair Chalmer’s bronze in the 400m hurdles.

Were there any controversies?

It’s a global sporting event so of course there were controversies – though perhaps not as many as one has become accustomed to.

Track cycling made the headlines for all the wrong reasons, firstly when England pair Sophie Unwin and Georgia Holt finished third in the tandem sprint race but were left in tears after they were denied bronze medals and a place at the podium ceremony after the race had been incorrectly advertised as a medal event.

Just two days later, a horror crash saw England’s Matt Walls fly over the barriers and into the crowd during the last lap of the scratch race qualifying, leading to the day’s racing being abandoned.

Thankfully, no-one was seriously hurt in the incident but the accident did raise concerns about the safety of the sport, with cycling legend Sir Chris Hoy calling for plexiglass screens to be installed at future velodrome venues.

Australia may have won the 2022 Games but one of their gold medals will be heavily disputed, as it was revealed that a member of their triumphant cricket team tested positive for Covid-19 just hours before the final match.

Star all-rounder Tahlia McGrath recorded a positive Covid result, but went on to play the gold-medal match vs India, much to the confusion of the opposition team and the anger of many pundits who called the decision to allow McGrath to play ‘shameless’ and a ‘dereliction of duty by authorities.’

And, finally, there was heartbreak for England women’s 4x400m relay team, as they were disqualified and stripped of their Gold medal just after winning it in the most dramatic fashion.

They initially pipped Canada to the victory by just a single thousandth of a second, much to the delight of the home crowd, but as they celebrated officials reviewed their first handover, with replays clearly showing that Jodie Williams had stepped into another lane.