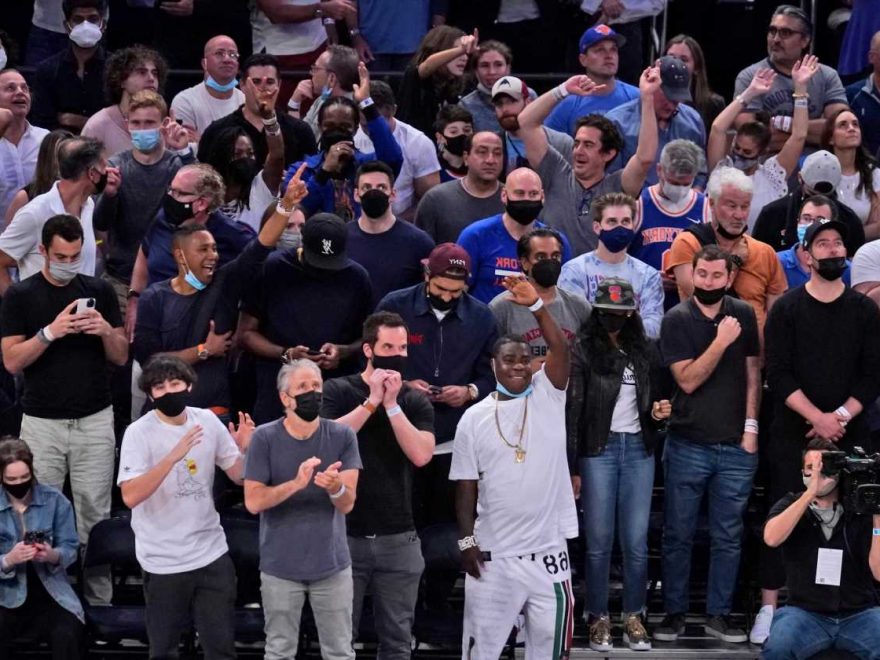 When the game-winning floater went in for Trae Young on Sunday with 0.9 seconds left to give the Atlanta Hawks a 1-0 series lead over the New York Knicks, he put his finger to his lips to silence a Madison Square Garden crowd that had been cursing him all night.

But the most important part of that moment wasn’t Young’s first big NBA playoff moment or becoming New York’s latest villain. It was much simpler than that: For the first time in a long time, there was actually somebody to shush.

Between the raucous scene at the Garden on Sunday, the massive galleries following Phil Mickelson at the PGA Championship, playoff hockey in Nashville being played to 71 percent capacity and mostly full baseball stadiums all over the country, this weekend felt like the moment sports truly came back.

And it was glorious to watch.

Fan, including Tracy Morgan and John Stewart (both front center), rise to their feet during the final moments of the NBA playoff game between the Atlanta Hawks and the New York Knicks. (Photo: Seth Wenig, Pool Photo/USA TODAY Sports)

Throughout the COVID-19 pandemic, sports have progressed in stages from total shutdown, to playing in a bubble, to allowing in a small percentage of fans as long as they were socially distanced.

This, of course, was done with the health and safety of everyone in mind. But it also couldn’t go on forever.

High-definition televisions are great, but there’s nothing that can replace sitting in the stands for a big game and feeling the energy of a crowd. It’s better to have sports than not to have them, but let’s be honest — it just wasn’t the same without people there to watch.

“I’m glad fans are back,” Young said, even though they frequently chanted his name with an expletive in front of it. “I’m glad MSG was rocking tonight.”

It would be inaccurate to say that sports are entirely back to pre-pandemic times. The attendance restrictions still vary by market, but 10 of the 16 NBA playoff teams will have at least 10,000 fans and those numbers could very well go up in the coming weeks if the COVID-19 case numbers continue to fall.

NBA PLAYOFFS: Young stars up to the challenge in postseason debuts

But it does finally feel like the light switch has been turned back on — not because COVID-19 isn’t real or isn’t a threat or was never a danger to spread through crowds. It’s because, finally, the country is making real progress in getting the coronavirus under control.

Thanks to the wide distribution of vaccines, it’s finally working.

TOKYO OLYMPICS: What we know as Japan added to 'do not travel' list

According to the CDC’s Monday update, 49.8 percent of American adults have been fully vaccinated, with 61.5 percent having received at least one dose. Meanwhile, the seven-day average of new COVID-19 cases dipped to 22,877, the lowest in more than 11 months.